Home>Blog>Skiing>Stoked! Jan’s Ski Blog [S02, Day 36] – Made it to Burke Mountain For Last Minute Runs on a Gorgeous Bluebird Day

Stoked! Jan’s Ski Blog [S02, Day 36] – Made it to Burke Mountain For Last Minute Runs on a Gorgeous Bluebird Day 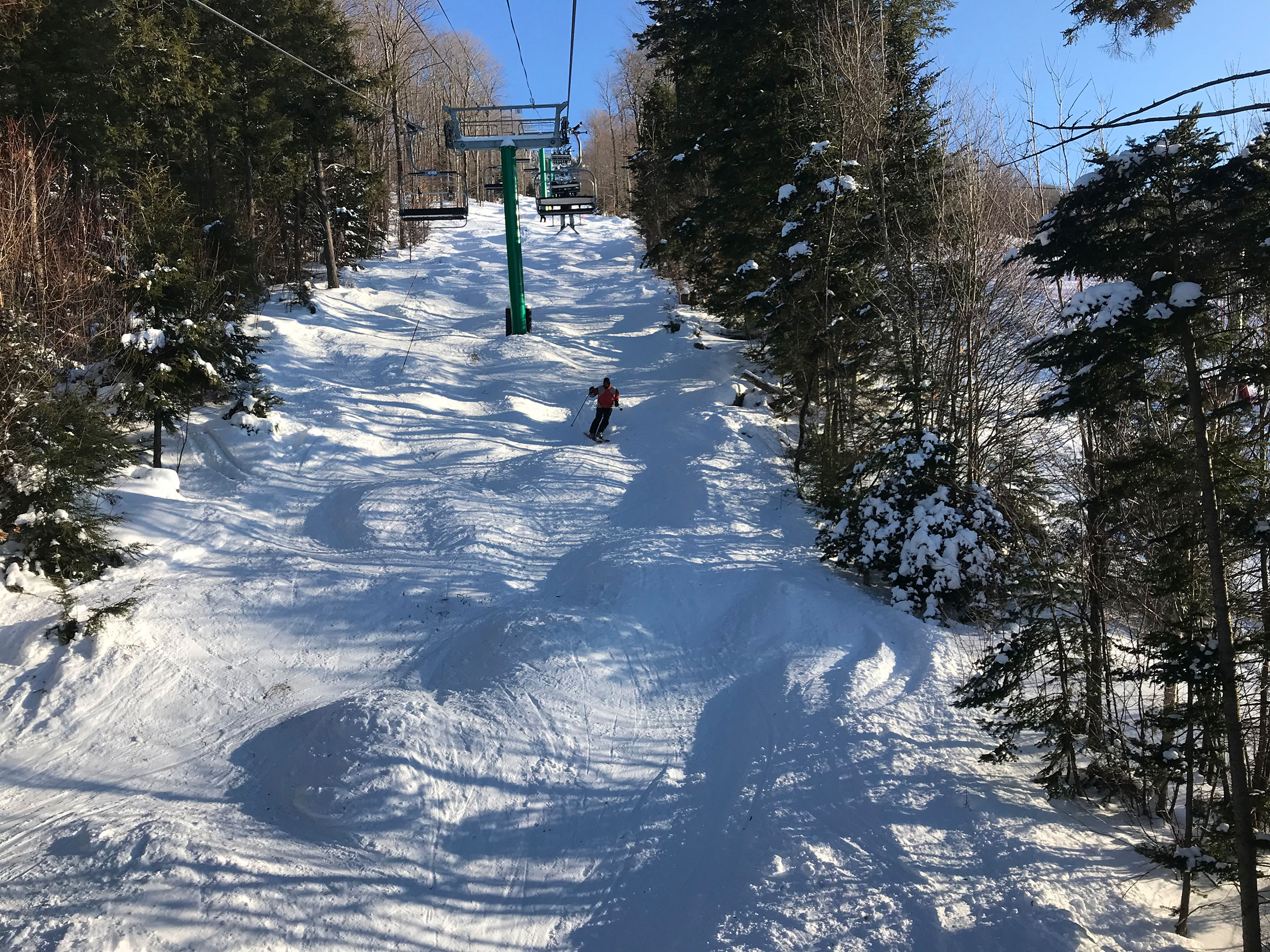 Living ten minutes from Burke Mountain and working from home, I find myself lucky that I can pretty much ski there anytime I want. I did not ski at Burke this weekend because it was President’s day weekend and I wanted to avoid the crowds. From my living room I have a direct view of the mountain. It was absolutely gorgeous blue bird day outside and it was very hard looking at this perfect mountain all day while working. At about 2:40pm I decided I had to take a break from my project and drive over to Burke to ski for the last hour.

I found parking right next to the Mid Burke Lodge. Although today was President’s day, I was hoping that by 3pm the crowds would have died down. I’m sure they probably did, but there was still lot of people around and a line for the lift. Riding up the Mid Burke Express I spoke with a women and her son who had spent the whole weekend at Burke. She had been coming to Burke for twenty years and told me it was the busiest she had ever seen it.

Straight to Moguls and Glades

Coming off the lift I made way to the moguls in Wilderness. I totally forgot that lots of people means very skied off terrain and boy were these moguls skied off. It was just ice and thin cover in between hard pack. Wilderness took me to Powderhorn, which was also very thin and icy. I decided I would take my chances in the glades and skied into Throbulator. I’d only skied this glade a couple of times this season, but in excellent powder conditions. The initial mellow part of Throbulator was skied off, but still fun to cruise through. Once I got the steeper part, there were exposed rocks and roots everywhere. In my mind, I had to plan my route 5-6 turns ahead of time to avoid any hazards. I ended up taking a minor spill avoided a rock but made out in one piece.

I had My Eyes Set on Rerun

On the lift ride back up the summit, I was in awe of how big the moguls had become on Rerun since last week. I was itching to give it a shot, hoping that the conditions were better then what I experienced on my last run. I took the old lift line down to deer run and then dropped into the chute leading to Rerun. As soon I entered Rerun I was hitting rocks left and right and sliding out on ice. I didn’t feel like damaging my skis today so I cut across to Doug’s Drop. This was a worse choice, the trail was solid ice and I was continuously slipping out. It was a good reminder that I need to get my skis tuned again. Coming out of Doug’s Drop I ended up on Open Slope, which was my first groomer of the day. This ended being the most fun thing I’ve skied all day.

Let’s Just End It With Some Groomers

I decided for my last run that I would just do groomers, so I headed straight to my favorite one, which is The Shoot. From there I hit Upper Willoughby to Lower Bear Then, then crossed over Warren’s Way back towards Open Slope. This made me pass by lower Rerun, which also looked like a blast from the lift. I decided to give it a shot and hope it was going to be better then upper Rerun. I still hit a few rocks, and it was pretty skied off, but it was good choice to ski, because it was a freaking blast.