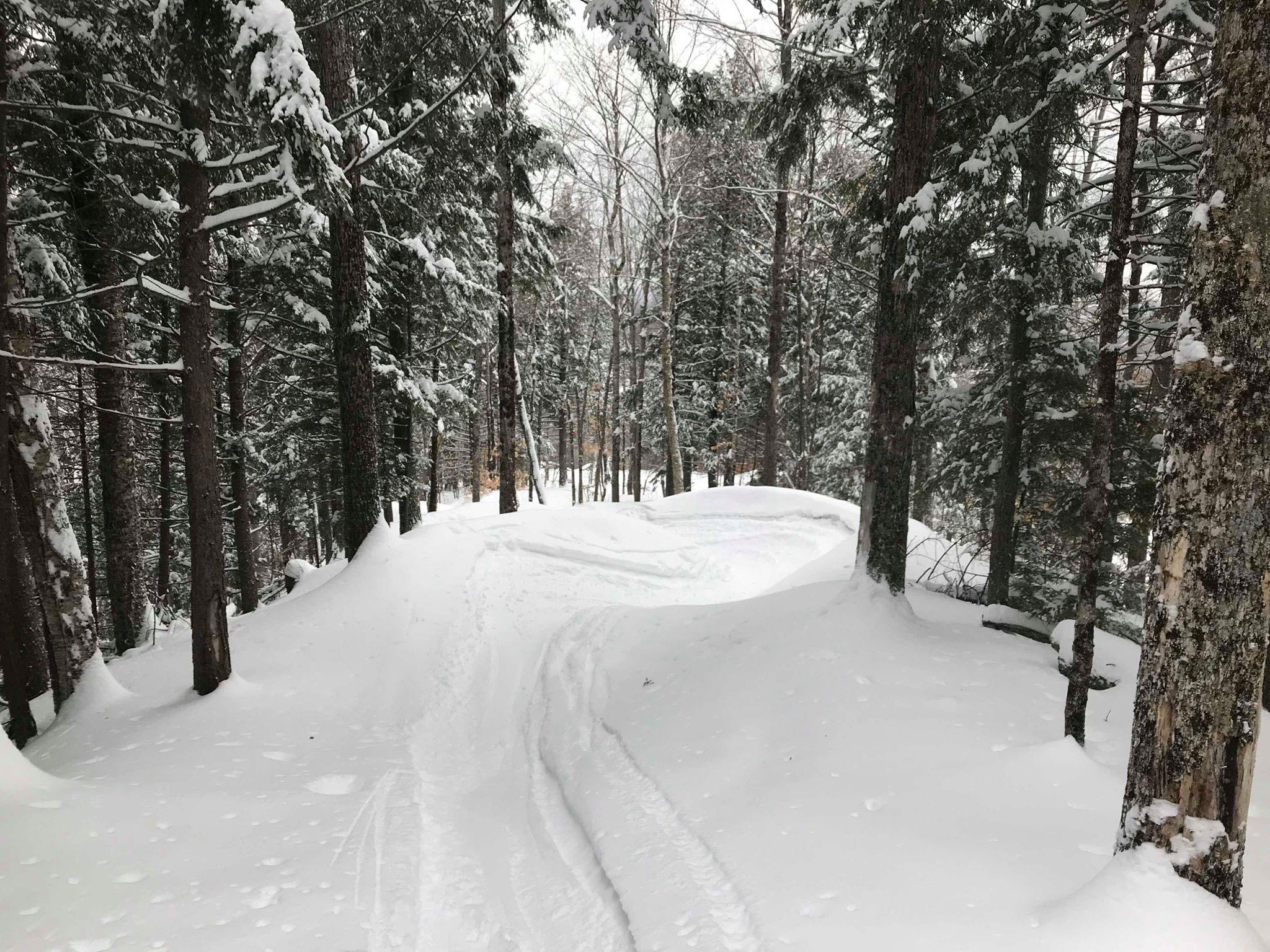 Late last night my friend Gabe Holm, from Thuro Shop in Brookline Mass., hit me up that he wanted to come ride Burke Mountain today. Gabe went to university in Lyndonville, worked at Burke and spent several years riding the mountain. I had initially planned on going to Jay Peak today, but couldn’t pass up skiing Burke with him and his girlfriend, Juliane.

With 8” of fresh powder combined with a holiday weekend, I expected it to be fairly busy. I met up with Gabe and Juliane around 9am and we did a few laps on the lower mountain. During this time, the line on Shelburne Express lift was not bad at all.

Going down Binney Lane, Gabe noticed that there was no rope up on the entrance to the lower Jester lift line. I’ve never been on this run, because usually it’s closed, so we decided to check it out. You have to climb up a hill before it starts going down again. You wind through a snake run, before being dumped out under the Shelburne Express Lift. I skied inside of a snowmobile track and started picking up some speed. On the last bump before the wooded bridge, I almost lost control, but instead of crashing into the creek, I saved myself at the last minute.

Playtime on the Upper Mountain

Juliane only wanted to ski the lower mountain, so Gabe and I made our way to the Mid Burke Express to go play on the upper mountain. The lift line was long for Burke standards; in fact, it was the longest I’d ever seen it. Within minutes, however, we were already on the lift making our way to the summit.

The first trail we hit was East Bowl, it had a mix of deep snow to play in, as well as areas of thin cover. With the crowds today, most of trails were tracked out early on. It was the most fun to stick to the powder covered sides and dip into the trees. I was pleasantly surprised to see that the Caveman Glades were open. Even they were fairly tracked out though, with thin cover. Even without idea conditions, we still had plenty of fun in them

Winding Down the Day

As we approached the end of the day, winds started picking up and temperatures dropped. Trails like Whilloughby and Big Dipper, that had been mellow for cruising earlier, became sheets of ice after the snow blew away. My goggles kept fogging over, making it difficult to tell the difference between snow and ice. There ended up being some pretty gnarly ice patches, where petrified skiers were sliding down them on their butts.

On our final run, I ran into a guy from the Ski The East Facebook group on Lower Whilloughby. He is a fan of these posts and it was rad to hear that people actually read them. On our final stretch to the base lodge, I was skiing behind a man and his child on High Meadow Pass. The man looked back for a second, not realizing his kid fell. He ended up avoiding hitting child, but couldn’t save himself. Check out the clip above!