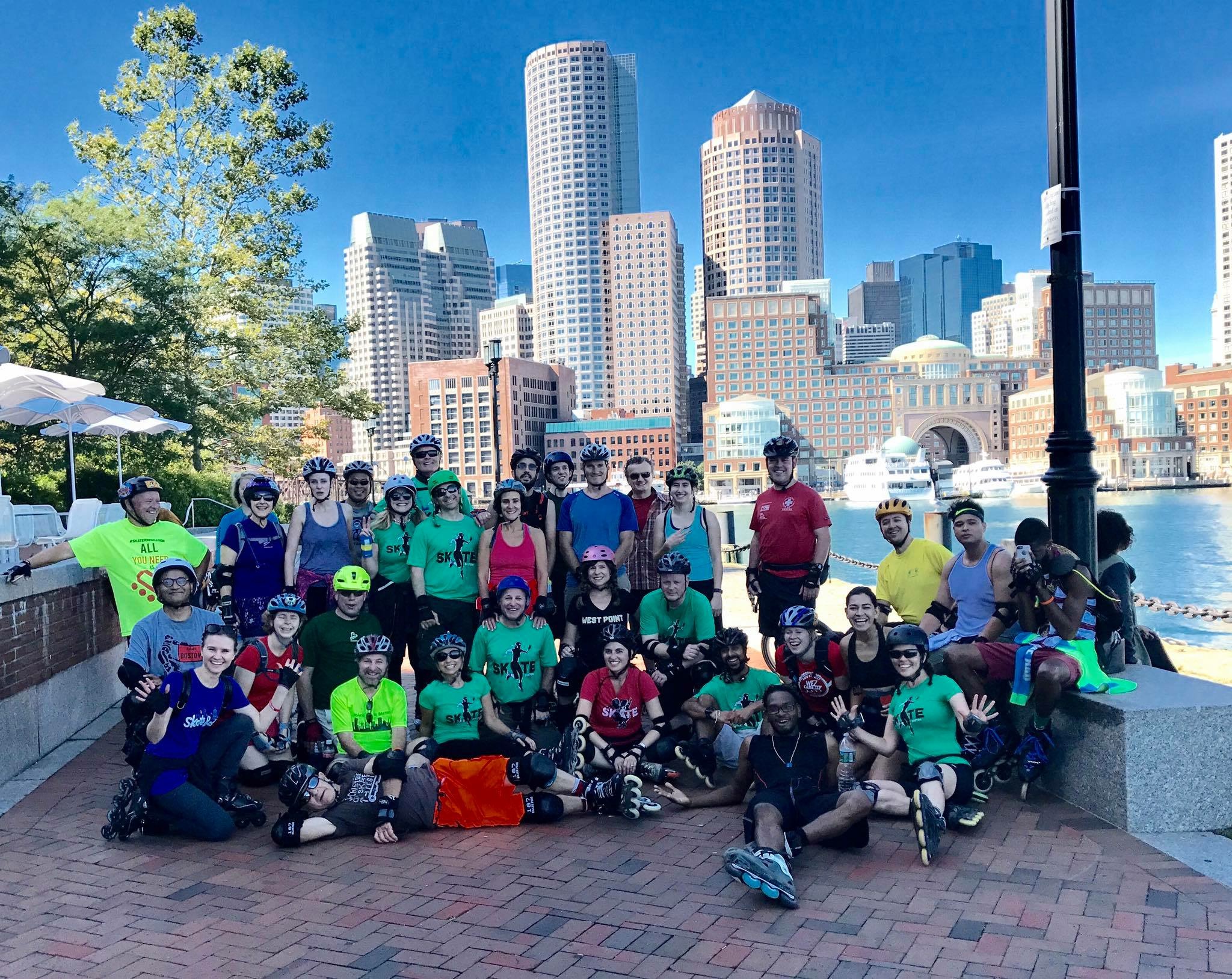 I was first introduced to the skating community at last years Big Apple Roll event. I’d only been skating a few months, but I was welcomed with open arms and made friends out of skaters far and wide. I knew I’d found my people, so for this year I decided to go to every social skate weekend I could. The last one of 2017 was in Boston this past weekend.

Skate Boston starts with a Thursday night skate hosted by Thuro shop. The shop stays open late so that skaters can stock up on anything they need after the Thursday night skate is over. Gabe Holm, the owner and recent inline downhill speed world record holder, runs quite possibly the best skate shop on the East Coast. It’s hard to not to find a part he doesn’t have, and his extensive knowledge of the sport lets you know you’ve come to the right place. Gabe spent four hours with me on Friday morning, before his shop even opened, outfitting me with a whole new setup, that I’m confident will serve me well in my upcoming races.

The next morning Skate Boston held a unique event, Skate IA Skills Clinic , that was not part of other social skate events this year. Sonic and Trish ran an entire day’s worth of training in slalom, aggressive and urban skating for only $50, down from their usual rate of $85. Registration took place at the host hotel that afternoon. (Speaking of the host hotel, it was the Boston Park Plaza, which was so fancy that when I rolled in I was sure I was in the wrong place and was about to be kicked right out. Surprisingly, they were completely cool with us skating through the lobby and the halls.) Hanging out at registration is always one of my favorite parts of a skate weekend. Greeting skaters from Toronto, Miami, D.C., Philadelphia, and many other cities, reminds me of the deep ties in the skating community. No matter how much time has passed between skate events, we’re always ready to lace up again like we were all just skating together yesterday.

Colleen, the woman who runs Skate Boston, had a whole host of goodies for skaters at registration, including a sweet Life is Good water bottle, candy, glow sticks and stickers. Unfortunately it rained all day Friday so the Friday night skate was called off. That did not keep the skaters from still having fun. We went out to Rock Bottom for dinner and then a group of us went to the Chez Vous roller disco afterwards. Chez Vous was the perfect atmosphere for skating on a rainy day; not too crowded, a fantastic DJ and a nicely maintained floor.

Saturday morning started with the Rollerblade 10K race, which I chose not to participate in because I had a new set up that I was just getting used to. It took place on the only segment of decent pavement that exists on the Charles River Esplanade. Finding a skate-able bike trail in Boston is a like searching for Atlantis. The roads were still wet from the night before causing quite a few people to fall down on sharp turns, but in the end, they all survived and made it to the 10 am meetup spot. The next skate was the 12.5 mile “higher learning” route that explored many of Boston’s college campuses (there are THIRTY-FIVE colleges in Boston!). We ended the skate at Quincy Market, where we were supposed to grab lunch, but the place was packed and it was a little like playing bumper-tourist getting in and out, especially on wheels. After lunch, we sailed off on a 12.9 mile skate through Cambridge before ending up back at the host hotel.

Mitch is famous for brewing beer all year for Skate Boston, and it was time for a well-deserved trip to the “Brew Room.” Dinner at Fire and Ice followed shortly afterwards. Like all Saturday night skate dinners, the laughter and drinks flowed freely. The atmosphere was filled with stories of social skate weekends past, new friendships forming, and the excitement of being around a group of people that understand your favorite hobby. Again, the gang returned to Chez Vous to show off their skate dance moves and roller danced the night away.

For those that didn’t disco a little too hard the night before, or those that grabbed a cup of coffee and rallied, there was a 9:30 am Sunday morning skate. This skate was “Parks and Rec” themed and went through various parks along the Charles River Esplanade. This skate paused near Harvard Square to drop some skaters off for Cambridge Skate Fest, a freestyle and slalom skating competition. NYC’s very own Sonic took first place in the slalom competition.

A short, 7-mile afternoon skate rounded out the weekend before most people departed back home. As always, it’s hard to leave another social skate weekend, especially the last one of 2017!
Skate Boston was expertly planned, with routes efficiently led by locals. Turns were marked with great care, and if there was a hill, local skaters went ahead to block off any intersections that might interfere with our descent. Each skate had a lead and a sweep, and I wasn’t in the back, but I don’t think anyone had an issue keeping up with the pace, which was appropriate for expert and beginner skaters alike. Colleen did an amazing job finding local restaurants that accommodated a variety of diets and were friendly towards the skater on a budget. The host rooms weren’t terribly expensive, but several skaters found others to split rooms with to make the experience more budget-friendly.

Thanks so much to Colleen for planning another successful Skate Boston event!