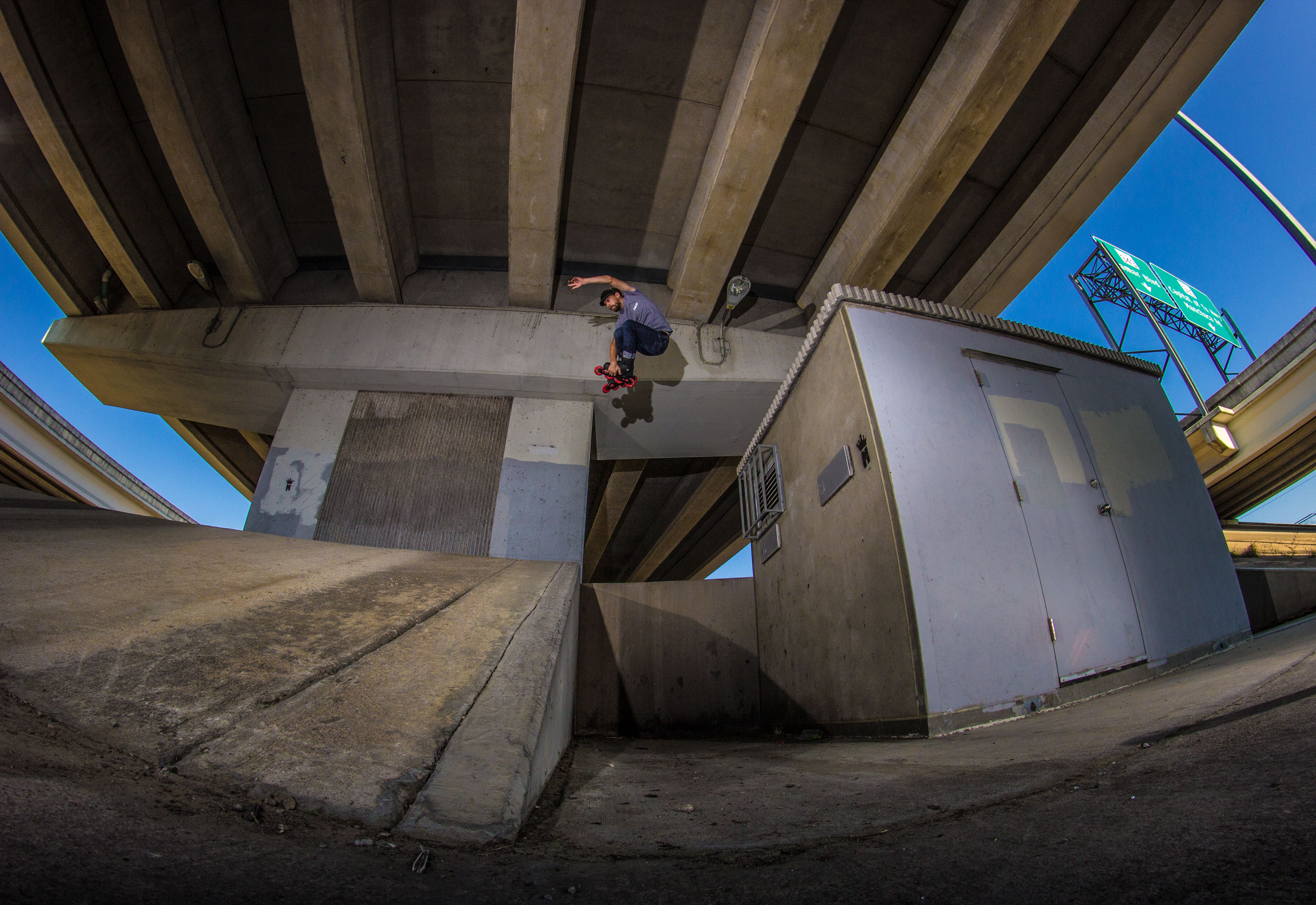 Mick Casals is a 29-year-old aggressive inline skater living in Austin, Texas, USA. When it comes to skating, Mick is really good at it. I’ve spent the past fives years skating and traveling with Mick and he continuously blows my mind with his creativity and style. He recently purchased some K2 r100 frames to put on his Razor Cults and has been doing some really fast, creative and really cool skating in them.

You currently live in Austin, but where did you live when you first started skating?

I was born in San Antonio, Texas. That was where I lived when I got my first pair of skates in 1996. Back then I would just skate around the block and jump off curbs.

When did you start aggressive skating?

It wasn’t until I moved to Seguin, Texas for Middle school. I was outside my school and saw some dudes grinding a curb with Soap shoes. It turns out they all rollerbladed, so I started skating with them and getting into doing tricks.

Coming from aggressive skating, what do you consider the smallest wheel size that counts as Big Wheel Blading?

I would say 72mm wheels. I do not think 64mm wheels and the Ground Control “Mega” frames that people are skating count as big wheels. They are just, almost big…

Have you skated a 72mm setup?

Yes. I skated on the Ground Control “Big” frames and they were really fun. I liked them a lot!

How do the GC “Big” frames compare to smaller wheeled aggressive frames?

I don’t find the “Big” frames harder to skate except when doing topside tricks on ledges.

Which do you enjoy more, the bigger wheeled aggressive frames or the smaller wheeled ones?

I like a mix of both. I do like the length of the bigger frames, not necessarily the height, but the stability that comes with the length is really nice.

When was the first time you tried skating some actual big wheel freeskates?

It was when I was living alone in Waco, Texas for a year. I was getting pretty bored living there because there were no other skaters in Waco to skate with. I ended up ordering a pair of Powerslide Imperial 3x110mm skates to explore the trails in and around Baylor University.

Mick Casals with a mute air around the corner. Photo by Joseph Gammill

How did skating around on freeskates compare to what you were used to with your aggressive skates?

The maneuverability of them was pretty crazy. You could really carve and do some cool foot work. They were also really fast which I liked. The few times I skated them around Waco was super fun, but unfortunately I bought them a size too small and they hurt my feet really bad. At first I planned on doing some distance skating with them, but I just kept finding myself still trying to find tricks to do, and not really focusing on the distance aspect. Basically I was just skating around town to find and look at spots to aggressive skate.

I prefer the longer length of the 4×100. They are super stable and fast, which I like. I think if I skated them as a flat setup and not rockered at all, that they would be hard to skate. I have them rockered a little bit, so they feel just as maneuverable as the triskates did.

After skating on big wheels have you noticed any changes to your skating when back on your aggressive setup?

Definitely! I feel like they have been a tool, that has taught me to do a lot more on my blades, that I never even thought about doing before. They made me realize how to do different movements with my feet, that I never focused on in the past.

Mick Casals with a wall ride over the stairs. Photo by Joseph Gammill

Have you messed around with any mushroom blading?

No, not at all. It hasn’t even crossed my mind. I do not think I am good enough to do all that wheel slide stuff. I can’t really say that I’ve wanted to try to slow down and skate smaller obstacles. Since skating these K2 frames I’ve been trying to skate mainly bowls and skate parks. I find it really fun to pump as fast as possible around bowls with these frames. I do love watching the things that the mushroom blading guys do, but I don’t know if I can do any of those crazy tricks like citric acid slides. For my foot size, the 100mm K2 frames are too long for me to do that kind of skating. If I had a 90mm setup I think I would start doing more of those style tricks.

Are there any big wheel skates out there that you would like to try out?

I’d really like to try skating in a better-made boot. Maybe sort of carbon skate, like the Seba’s. Once I started skating a frame with 100mm wheels on the Razor Cults boots, it made me realize how flexible those shells are. They aren’t made for that kind of skating at all. I ruined a pair of Cults using the K2 frames with 100mm wheels on them. They made the boots super floppy and basically I destroyed them. I would love to skate a Seba boot with a 90mm Wizard frame setup on them and see how they feel. That combination, however, is just too expensive for me to ever get.

Are there any other tri-skate setups you would get?

Tri-skates for cruising and skating around town is awesome, but I would not want to do any tricks with them. I like having soul plates so I can still do makio grinds. I also prefer the long 4×100 frames so that I can do those really weird channel 1 and channel 3 stalls. Stalling between the wheels on tri-skates feels really strange to me.

What do you think about off-road skating?

I haven’t tried off-road skates yet, but they are the only tri-skates that I would really love to skate. The thought of being able to skate on BMX pump tracks and launching giant ramps seems amazing to me. Getting enough speed and being able to hold it, like a BMXer does, is something I want to experience.

How much time do you spend skating on your 100mm setup compared to your normal aggressive setup?

I’m skating the 100s probably 25% of the time. I took them to Atlanta with me for the A-Town Stomp and didn’t skate them the whole trip until the night before the competition. I brought them with me to the skatepark, put them on and skated them for 30-40 minutes, just so I didn’t feel like I brought them with me, on the trip, for no reason.

What would the perfect frame for you?

I would love it if someone came out with a 90mm rockerable frame with an h-block for grinding. Pumping around bowls is super fun, but being to grind as well would make it that much better. When skating in a bowl with big wheels you can get so much speed and so much more air without all the huffing and puffing. I just like skating bowls and launching things all the time now!

Is there anyone skating big wheels that you like to watch?

I still love watching Joey McGarry and Todd McInerney do all their stuff and Leon Basin of course. Besides that I haven’t been paying too much attention to who is doing what out there. I’ve seen some cool edits online, but do not remember which ones they were, or who was skating.