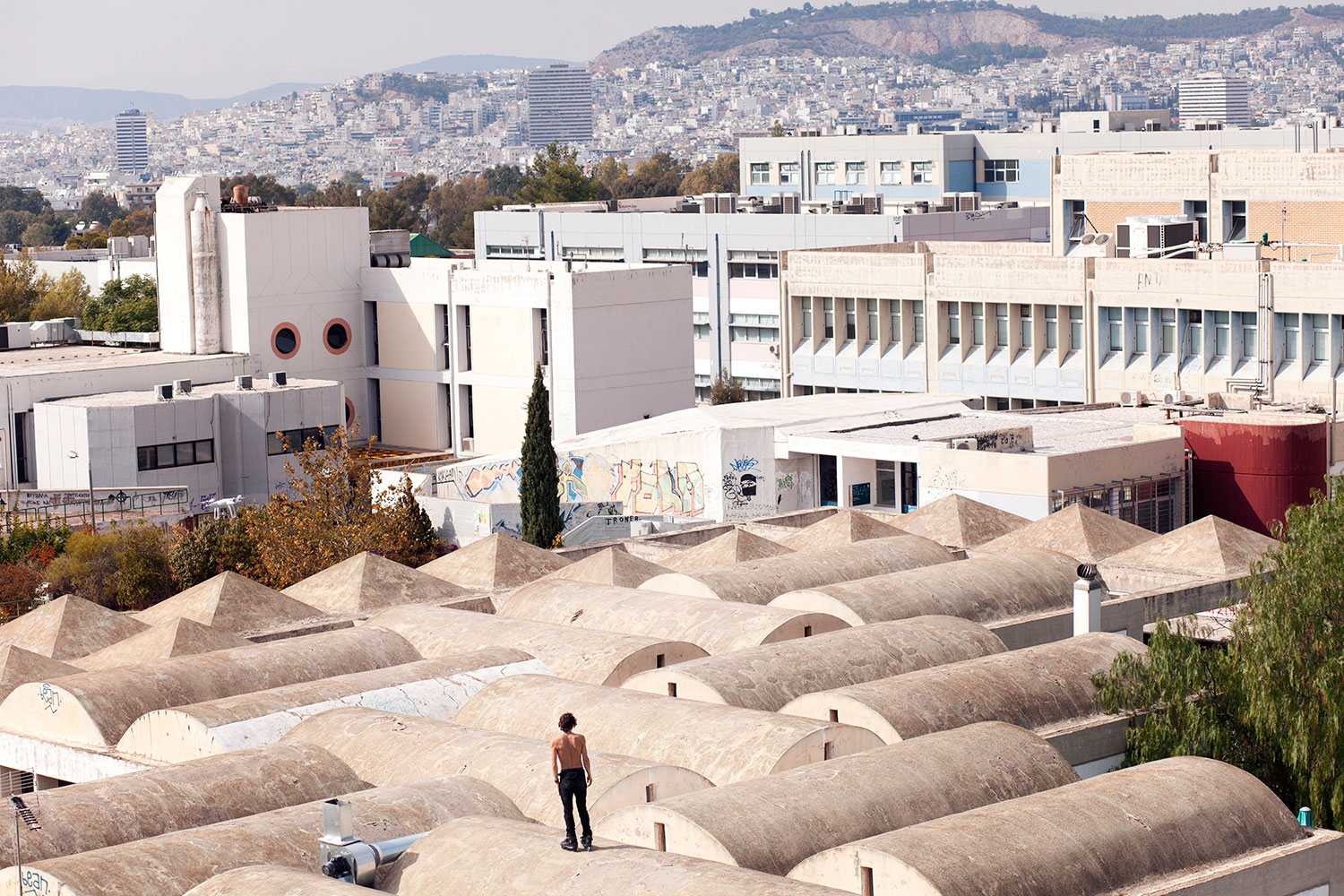 Dominik Wagner is a 36-year-old inline skater and photographer based in Amsterdam, Netherlands, and Berlin, Germany. Dominik spends most of his time living in Amsterdam with his girlfriend but until he fully establishes himself there he must still frequently travel to Berlin for work.

How long have you been skating?

I have been blading for 26 years.

How did you get into photography?

Through blading, I have been surrounded non-stop by videographers, photographers, and all sorts of creative people while working on projects. Still, as a skater, I picked up a video camera like most skaters do but never did much with it. In my early twenties, I studied economics and was unhappy with that decision. I wanted to do something different and more creative. I still don’t know exactly why, but at that time, I thought photography would be a cool thing to do. So, I bought a camera and started playing around with it. I quit my studies and dedicated a whole year to building up a portfolio and applying to several photography academies across Germany. Almost every academy I applied to accepted me, which allowed me to choose where I wanted to live, so I decided on Berlin!

What gear are you currently using?

How long have you been shooting skate photography?

That’s not easy to answer because I was shooting blading with a very documentary approach for a long time. Of course, I would also photograph people doing tricks, but it was never what I would call skate photography. I started taking real skate photography on the Cayenne Project tour in Greece in 2016.

What was your first published skating photo?

I am not sure which was my first published skate photo, but I think it could be the picture of Worapoj Boonnim doing a 180 over a bush while Richie Eisler was filming him during a trip in Thailand back in 2012; I made a whole travel story for Be-Mag back then.

What magazines have published your photos?

I have had a few stories and pictures published in Be-Mag, Fise-up Magazine, One Magazine, Haitian Magazine, and Skitch Magazine. Unfortunately, there are not many print magazines related to blading left; since 2014, I have self-published a couple of projects!

Have you worked together with any skating brands?

Yes, I have been working with a couple of brands but not as much as I would like to. I used to work a lot with The BlackJack Project, doing Lookbooks for new lines or providing photos for online content. I am helping out Kyle Sola with photographic content for Sola Equipment. This year I started working with Rollerblade, documenting the testing of 3D printed prototypes for the new Blank skate, which they will release next year.

Out of the projects that you have worked on, which are your favorite?

Working with the Cayenne Crew has been amazing! I don’t think it can get better than traveling to super cool countries with the best skaters in the world! The trips were intense from time to time, but which tour is not. Surrounded by good friends, I get to document the best skating in the world in front of my lens, and if I really like a spot, I can skate it myself. I also love that I can add creative input into the final product! The Cayenne Project combines all my favorite things, skating, traveling, and photography

Who do you enjoy collaborating with the most?

I enjoy collaborating with the Cayenne Crew for all the reasons I mentioned above. The whole project is a team effort. It could never be the same with other people; everyone involved is a master of their craft, and then you have somebody like Karsten Boysen who keeps pushing you to the limit. I feel blessed to be able to be part of the project!

Working with Kyle Sola is always very uplifting; he is a very forward-thinking person and always gives me new perspectives on my work!

The Cayenne Crew in Taiwan

Is there anyone who you’ve wanted to shoot with but never had the opportunity?

Nobody in particular or maybe too many names to mention, but I also have to say that I am usually thinking about projects in a bigger picture, and not about one specific person to just get that one shot!

I would love to do something more in the direction of what Dom West did with “Streets of Lagos,” going to a place where you wouldn’t even dream about finding skaters there and documenting the skate scene.

Do you have an all-time favorite photo you’ve shot?

Yes, in a way, I do, mostly because it sets the beginning of my approach to a personal style. The photo is from a project I shot in NYC as my thesis; I documented the NYC skate scene and made a photo book called “Wasteland.” I call the photo Surf Av because that’s where I shot it, and the street’s name is also visible in the picture. What makes the image so unique to me is that the whole composition works on different layers. At first, you will probably see what I call a cityscape or urbanscape, a very eye-catching red Pontiac Firebird (at least I think it is, I am not a car guy) in the middle. Then on a closer look, you see a skater (Ryan Many) doing a wallride underneath a building standing on stilts; all-round this scene, you see other skaters waiting to be next or just hanging out.

Even though the composition is in a golden cut, all the lines point the view in the left direction towards the skater’s action. Next to that, there is also the layer of color, I would not describe the photo as very colorful, but there are red, green, and yellow dots that match each other very well. The red car and the red traffic light, the yellow lines on the street and the yellow hoodie of one of the guys, the green street sign (that says Surf Av) and the green stilts, all of this circles around the main action. So, in the end, the shot works pretty well without the skating in it but combined, it creates something astonishing.

Fun Fact, the moment I captured the photo was also when I met my dear friend Kyle Sola for the first time. You can see him in the blue shirt on the left side of the photo.

What is the most challenging photo you’ve ever taken?

I cannot say which particular photo was the biggest challenge, but I find shooting big stunts in low light challenging. Usually, I shoot skating with available light only, and I don’t want to bring any extra equipment like strobes and so on. I want to travel light to be more flexible when it comes down to capturing the action. On the Cayenne Tours, I get pretty lucky because Benni Büttner, one of the two filmers for the project, brings his LED panel. It does help to have some sort of light source to see with at night. But still, shooting with slow shutter speed combined with the high pressure of missing the shot when somebody is doing risky maneuvers has cost me lots of nerves in the past!

How does skating compare to how it was when you first began?

I have been skating for a very long time now. When I started, the hype was massive, blading was everywhere in the mainstream media, and there was lots of money to make. Back then, everybody was still so young, I was very young, and I had no idea what the hell was going. How do you get into a magazine or in a skate video? How do you get sponsored? To be fair, I wasn’t too concerned with those things back then; all I wanted to do is to skate!

Later on, when I became more involved within the skating industry, it seemed like most people were already on their way out of the sport; thinking about it, it was a pretty depressing time. Magazines were dying, skate shops were closing, and every year there were fewer and fewer events!

The big difference now is that the sport has created an independent scene, for bladers by bladers, something like Them Skates is the best example. Sure everybody is kind of old now, and barely anybody can make a real living from blading, but that also means the kids from back then are grown up now, with real jobs and a genuine appreciation for the culture within our scene. A scene that transformed into a worldwide network of exceptional talent in every direction imaginable!

Where do you want to take your photography into the future?

I want to keep on professionalizing myself as a photo designer. For the last couple of years, I have been working for advertising and fashion photographers, creating light setups and assisting with the set’s digital workflow. Through this, I have learned a lot and have been involved with some pretty cool work! So I hope to establish myself in that field in the near future!

Is there any photographer who influenced your approach to shooting photos?

I am following what’s going on in photography these days pretty closely, getting lots of inspiration every day, especially from some of the people I am working with. The person who had the most significant impact on me was a teacher at the photo academy, Sabine Schründer. Not necessarily because of her personal style, but because she pushed me to start documenting the blading scene, especially capturing quick and easily overseen moments!

Who is your favorite photographer?

I can’t say who is my favorite; I am really into the portrait work of the old masters like Irving Penn, Diane Arbus, and Richard Avedon. I love the conceptual aspect of Hiroshi Sugimoto’s work, and then again, the photography of Bruce Davidson, especially his book “Brooklyn Gang, “has always been very inspirational for me! At the moment, I am really into the stuff of Nikita Teryoshin; the mix of humor and social criticism is just fantastic.

What kind of photography are you doing outside of skating?

I aim for a career as a professional photographer, so I am always keen to create new projects for my portfolio. In the last couple of years, I mainly focused on sports, documentaries, and portraits.

Has COVID-19 changed how you go out skating and shooting?

It didn’t change that much; of course, we are trying to keep a certain distance, and the high fives turned into elbow bumps. The wonderful thing is that this crazy time has brought so many people back into skating. Blading is one of the few activities you can still do pretty freely without many restrictions!

Are you taking any precautions while out against COVID-19?

I am keeping my distance, I am trying to avoid super crowded places and skateparks, and of course, I wear a mask wherever it is obligated! Apart from that, I need to provide a negative COVID-19 test result for every photo shoot, so I am getting tested very frequently.