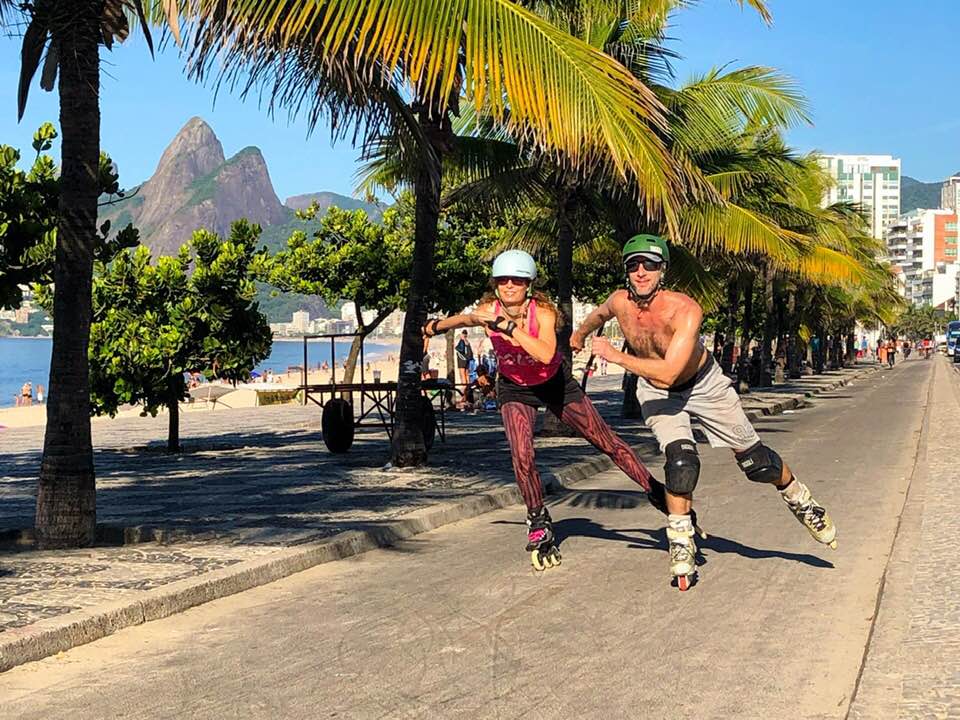 At the beginning of November 2018 I left the UK and embarked on my first World Teaching Tour taking me to 14 cities in 10 countries over 8 months. I’ve just visited and taught in Lima, Peru, city number 11. Still to come are Mexico and the USA (San Francisco and New York City) before I head home to the UK in June.

It fascinates me to notice the different ways that inline skating is encouraged and supported in different cities. The number of active instructors and skate schools is a good indication of what stage of growth the sport is experiencing in each country. The existence of a street skating scene points to authorities at least not actively discouraging the sport.

It is a great privilege to travel the world doing what I love and connecting with old friends and family while making many new connections. I’ve been touched by the kindness and openness shown to me everywhere I’ve been and I love the sense of pride that skaters have when showing me their cities. There is no better way to see a city and to get a feel for a place than meeting its people and rolling through its streets.

This article will hopefully act as a resource for skaters traveling to these cities. Check out the list of local instructors, street skates, skate shops and Facebook groups I linked up with in each city at the end of the article.

My Tour began in Dubai and Abu Dhabi where skating seems to be quite new with no certified instructors in the region. There are some great places to skate and as expected for a modern city, smooth surfaces abound such as the Dubai water canal boardwalk, near Business Bay.

I also enjoyed skating the Meydan cycle track where I watched Dubai’s evening Light Show across the desert. Very surreal.

In Kampala, Uganda’s capital, I was able to support the Super Sonic Skate Academy with skills training for their instructors and ongoing mentoring through my online training courses which are proving invaluable to the school’s increasing professionalism and development.


Africa’s main obstacle to growth is access to equipment with almost no manufacturers currently serving the region. I hope this changes soon as I think Africa will be the next emerging skate market now that South America is booming.

Singapore has had an active skate scene for over 20yrs with many ICP certified instructors and Examiners several of whom I met while we were being certified back in 2002. Singapore is a fabulous location with great smooth surfaces, beautiful parks and the super modern Marina Bay and Gardens by the Bay should not be missed on skates.

Singapore’s Saturday Night Street Skate was super fun with a very friendly young skate crowd with some of the best slides I’ve seen. Coming into Marina Bay at night at the end of the street skate with the lights and reflections was a truly awesome sight. I felt like I was in the future…

I hadn’t skated in Australia for 17yrs when I spent my first few Skatefresh winters in Brisbane getting more teaching experience and escaping the UK winter slump. I believe Australia is one of the very best places to skate in the world. Their cycle tracks are smooth and they are everywhere and there is a lot….of….space…..

In central Sydney ICP instructor James O’Connor has been teaching for over 15yrs under the Sydney Harbour Bridge facing the Royal Opera House. He received a grant to run his skate school there which reflects a very supportive city council (contrasting with London where a license to teach in Hyde Park is extremely expensive). I find it fascinating to note these differences in how the sport is viewed by ‘authorities’ around the world.

In the Sydney suburbs ex-Skatefresh and ICP instructor Peter Schaeffer runs YouSkate.com.au and I was jealous of his local park, 12 months of sunshine and a van full of skate equipment which he takes to his schools and groups.

In December I ended the year in Brisbane with a Skatefresh weekend Trip which was organised and marshalled by local skaters who came to Rio with me in 2017. Brisbane is an awesome city to skate in (despite the hills) with lovely riverside paths, cycle tracks and lots of smooth to choose from. Their early Saturday morning Brekkie skate is the best way to start a weekend. Highly recommended.

In Brazil I taught in Rio de Janeiro, Salvador and Curitiba. Skating is growing fast in Brazil despite fewer than 20 certified instructors in the whole country but the growth in Facebook groups is staggering. Skating is extremely social and in every city there are multiple groups catering to different skate interests and locations.

Buenos Aires was a wonderful surprise with a thriving skate scene with street skates possible every night of the week and many events and races during the year. The city is flat with predominantly good surfaces although cycle paths get unexpectedly crappy

I was assisted in Buenos Aires by ICP instructors Sergio from Rollers7 and Lorena from Córdoba school Activity Roller. We had an awesome time touring the city and filming with perfect autumn warm sunny weather, March is a good month to visit.

I met the infamous “Tio Huber” who runs the Buenos Aires Thursday Night Skate and popular Facebook group Argentina Rollea where you’ll find everything you need for the city on wheels.


South America in general is experiencing a boom in skating with both children and adults. The Disney show “Soy Luna” I worked on in 2015 as Head of Coaching has had staggering success and is probably responsible for the majority of girls who are addicted to skating worldwide but particularly in South America.

However I think skating is booming in South America primarily because many cities choose to close roads all day on Sundays for residents to use for leisure and sport. This creates a huge incentive to skate providing weekly open spaces and distances for urban skaters to enjoy on their wheels. I think Europe, Asia and North America could learn something from this example. I am a huge fan of reducing car use and one way of doing this is making Sundays at least partly car-free.

Lima has perhaps the best skate weather ever, Summer high of 33 degrees C, Winter low of 17 degrees C and being on the edge of a desert, No Rain!I noticed a much younger demographic on street skates and a thriving market of up to 10 skate schools. I was assisted by Jonas, founder of R8 School and RollersPlace shop.

And so next I head to Mexico City, with active skate schools and many Facebook groups, events, competitions and multiple spaces where skating is permitted and encouraged. I’ll be eating as much Guacamole and Mexican food as I can in between workshops!

The Tour culminates in the USA, the home of inline skating and I’ll be heading to San Francisco to teach a weekend and also to skate with the very famous and respected ‘God Father of Skating’ David Miles who runs the Church of 8 Wheels, a legendary roller rink inside a converted church in San Francisco.

I’ll be joining their post Carnival dancing in the park after my workshops on 25-26th May. I’ll also be joining the Thursday and Friday Night skates in San Francisco and am extremely excited about this (although praying for not too many steep hills for my injured hip’s sake….)

In New York City of course!

After a weekend teaching I shall welcome a group of mainly European skaters for a 5 day Trip discovering New York on skates. Our Head Marshal will be the one and only Sonic Arnav who is perhaps the most prolific, varied and dedicated skater I know. He was responsible for showing me the Big Apple back in 2016 when I first visited (and he filmed my NYC Street skate video that so many people love).

The NYC Trip kicks off on 5th June with New York’s Wednesday Night Skate which is etched in my memory forever – catching glimpses of the Empire State building all lit up, or other iconic scenes and buildings is so bizarrely surreal. We will be in safe hands behind Sonic and I’m so looking forward to seeing my old and new Trippers in such an epic location.

There are still places for workshops in San Francisco and New York and the New York City Trip. Details below.

Personally one of the most fulfilling parts of this Tour has been meeting many of my online students and YouTube followers in the flesh and having them in class. I’m always pleasantly surprised when I meet them as they already skate well and I know they’ve done some work before I get there. But it is their gratitude and praise for my work which touches me most. To know that my ideas, theories and trainings are actually being used to produce positive results makes me feel deeply satisfied. I don’t think a teacher can ask for more than that. Certainly not this one!

Skatefresh celebrates 20 years in business in 2020 and more travel destinations are planned to celebrate this epic milestone. This Tour gave me a taste for being on the move and seeing the world while sharing my love of skating with others. Let me know if you think I should visit your city. Maybe see you next time around.