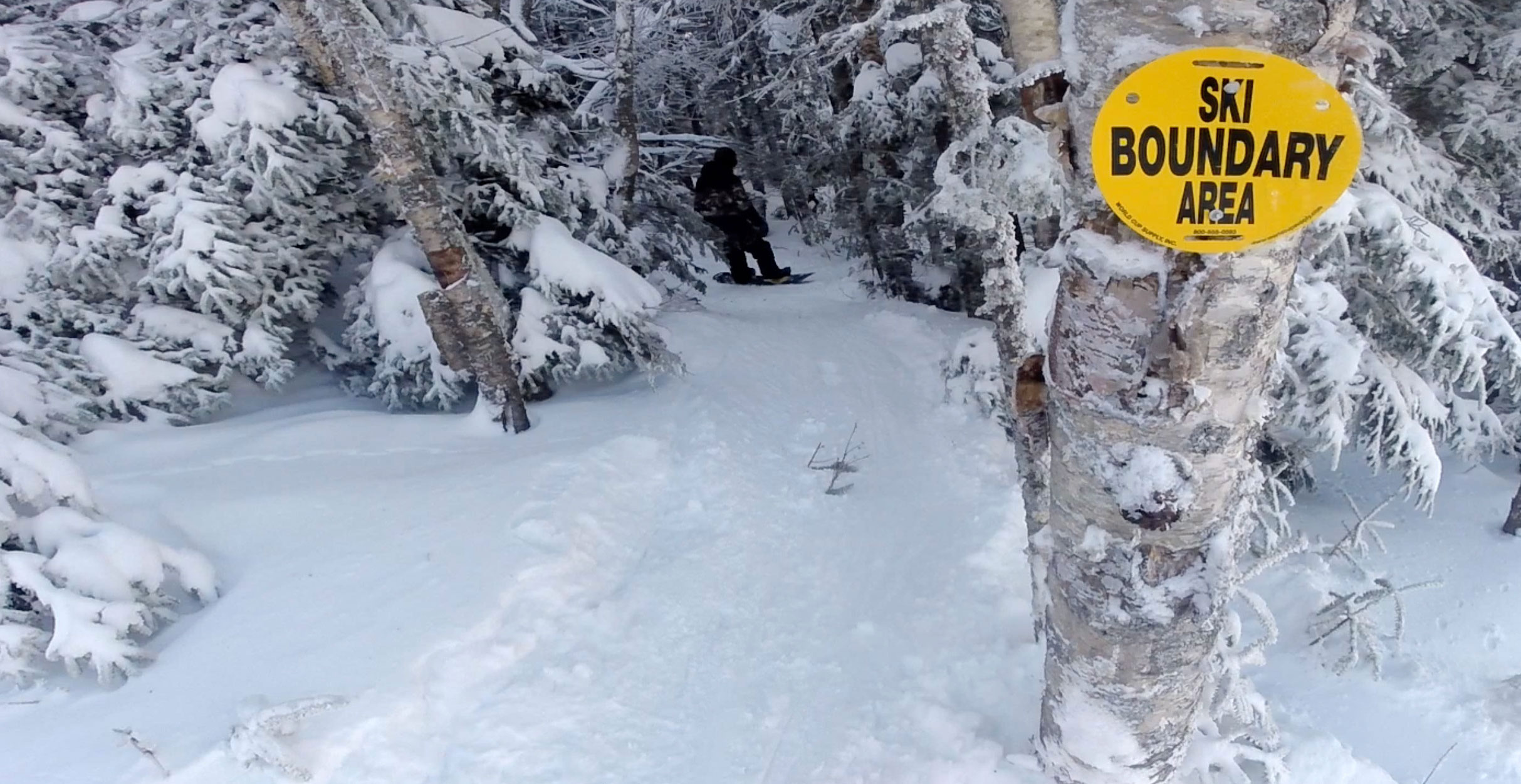 This past Sunday, I asked a fellow board member at the Lyndon Outing Club, Dick Tomasko, if he wanted to go check out the post storm conditions at Burke. He happens to live on my road, so I picked him up and we made our way to the mountain. It was -14 degrees Fahrenheit (-25.5 Celsius) when we arrived at Burke and our beards were instantly iced over.

We started out by stretching our legs on Binney Lane on the lower mountain. Next we checked out the condo trail in hopes of finding some powder stashes. All we experienced was a hard packed surface that was skied off. The low temperatures made the snow really hard and grippy.

Unmarked Glades off of East Bowl

Riding up the Mid Burke Express, you could see how much snow had fallen on the run below. There were lots of fluffy moguls, many with rocks still sticking through, causing a potential core shot for some unlucky soul. Dick wanted to take me into an unmarked glade off of East Bowl. The run up to East Bowl was very sticky and slower then usual. The cushiony moguls I experienced on Thursday, had now turned into hard pack that was difficult to navigate through. A third of the way down East Bowl we broke into the trees and hit a trail that was quite a bit of fun. Again, the surface was hard and skied off, but there was plenty of untouched powder all around in the glades it to get into.

A Couple of Quick Groomer Runs

Dick wanted to go make some turns on the groomers, so our first run was down Carriage Road, to Deer Run, to Big Dipper and ending on Little Dipper. All of these trails were perfectly groomed and fun as hell. We did one more run on the groomers hitting Lift Line, the Shoot, Upper Willoughby, Lower Willoughby and the terrain park.

On the lower mountain, Dick wanted to show me some unmarked glades and mountain bike trails to skier’s left of Bunker Hill. The entrance to this terrain is as soon you unload from the Shelburne Express Lift to the right. I’d never been in these woods before and was very excited to see what they had to offer. I was instantly blown away by how awesome this trail was. I was zipping through the trees, having the time of my life. I went back to the base lodge to grab my GoPro, so we could do one more run on camera. (Check the YouTube clip above)

I had two accidents on that run. One of them my ski got caught in a branch that was sticking out of the snow and it ripped it off my foot. The second fall caused me to get stuck parallel next to a fallen tree and I almost got stuck under it. I had had trouble getting my skis off, but eventually I was successful. I continued the rest of the run in constant glee.

Back to the Upper Moutain

We headed back to the summit and went down the shoot, which is one of our favorite runs. This took us to the ledges, which was covered in chunky ice and crud. We made our way to the base and headed back up for our last run. The plan was, we were going to check out The Jungle Glade, because it is the only marked glade that I haven’t skied yet at Burke. It’s been closed all season and it’s also fairly remote double black diamond, so I hadn’t wanted to go skit it by myself.

Out of Bounds and on to the Red Trail

Excited to finally check out the Jungle, we headed down Willoughby until Dick cut into woods. He entered the woods way before the Jungle even starts and blew past the Out of Bounds sign. I followed him, thinking that he was taking me on a different route to The Jungle, which he didn’t. We ended up on the Red Trail, which is a hiking trail that connects the lower parking lot of Burke to the Summit. I hiked this trail this summer, one month after breaking my back. It was not a good decision on my part, because the trail is very challenging and even without a bad back, it was one of the most difficult trails I’ve ever hiked.

Knowing that we ended up on that very same trial on skis, made me super nervous. I fell multiple times just getting to the trail from where we entered the woods. The Red Trail is very skinny, with exposed rocks, roots and branches. It has many drop-offs and steep areas. At one point I broke through snow into a creek and got stuck. Once me made it to the shelter at bottom of the red trail, we continued into the woods, missing the correct trail we should have been on. There were so many small tree saplings that kept catching my skis, causing me to fall.

I ended up on a spot with a rocky cliff and decided it was just to sketchy to ski down. I decided to take off my skis off and shimmy down it. Well, one of my skis got away from me and slid down the cliff before getting stuck in a bush. I began to climb down the cliff, but slipped causing my body to twist face first, down it. It was absolutely terrifying, but I ended up not getting too hurt. The snow was waste deep and I was having trouble retrieving and then getting back on my skis.

Once I finally succeeded I made it about 10 feet before hitting another branch under the snow causing me to face plant. At this point I was getting really frustrated and my body was fatigued. I was mentally and physically anguished.

The trail is nearly 3.5 miles of challenging terrain. We had gotten through the most difficult part, but my legs became jelly and I had to stop and shake them off every 30-40 feet. We finally made it back to the base lodge. I was ecstatic! Even though I had so many issues, I was excited I conquered such a gnarly trail.

A Sense of Accomplishment

I was thoroughly impressed that I completed a trail like this in my first year of skiing and felt it wasn’t far beyond my ability level. I would never have skied it on my own, and probably would have never skied it had Dick not taken me on it. He said the conditions were much worse then usual and wouldn’t have taken me, had he known.

Although I don’t plan on doing this trail again anytime soon, I am thankful that Dick challenged me to do it, giving me my first out of bounds and back country experience. When I got home I was absolutely spent. I had to take Advil for the pain, made heating pads for my back and ended up in bed for over two hours to recover. It was the same exhaustion I experienced when going on my 40-miles distance skates.