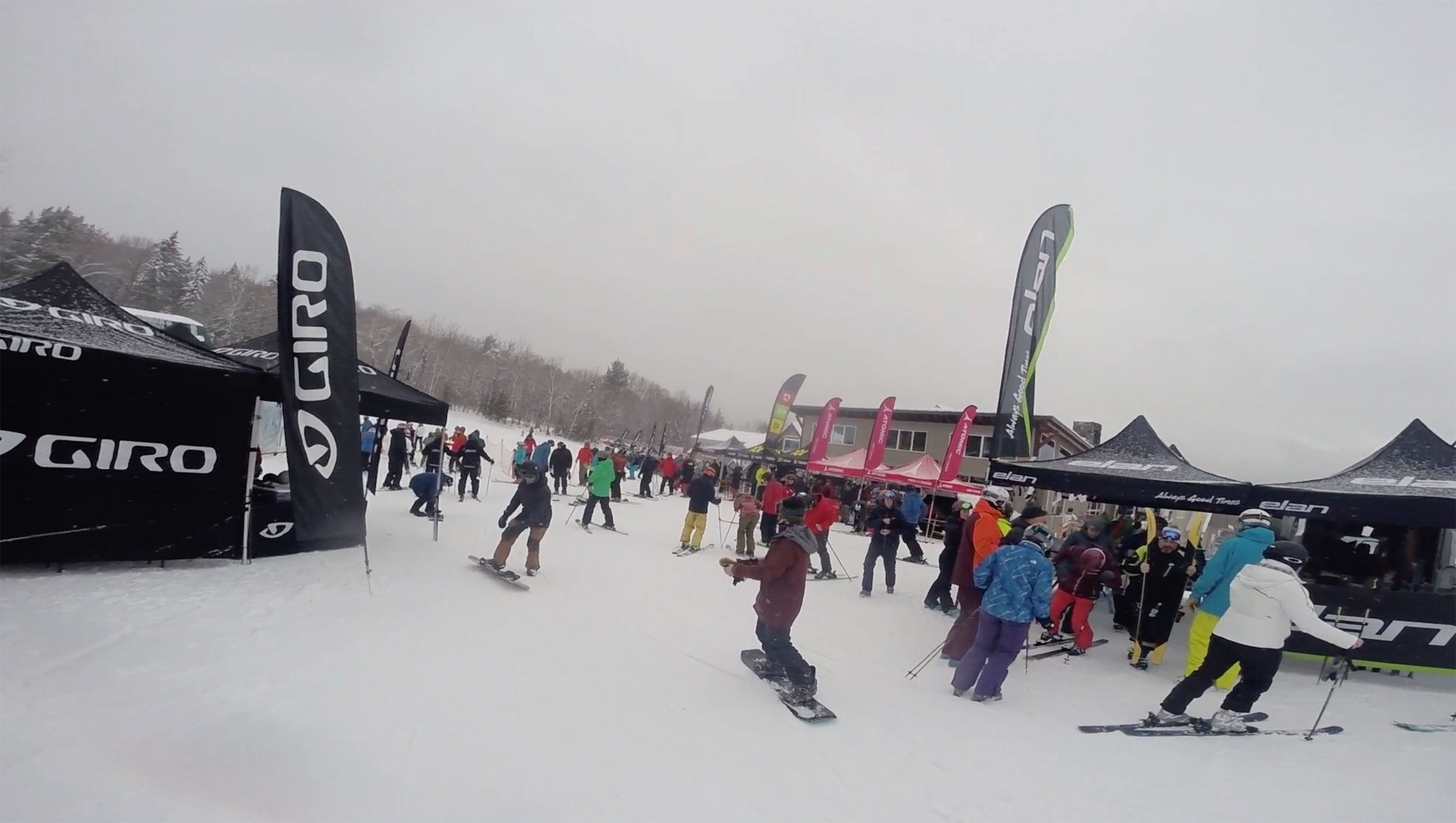 I drove an hour south to New Hampshire to meet Gabe Holm from Thuro Shop and his friend Jonathon at Waterville Valley for the On Snow Demo Day event. Gabe and I attended the same event, a few weeks ago at Pico Mountain. My first Demo Day event was at Stratton last year with Gabe and Jonathon. It was my first season of skiing and my sixth day ever on skies. I was still early in my learning and although we did ski some blacks, I wasn’t fully confident yet on steep and technical terrain.

I arrived to Waterville Valley at about 8:30am and parked less then 50 yards from the entrance. As I’m walking to the lodge, I noticed the guy in front of me was wearing a Vicious Bearings “Venom” Backpack. I was pretty shocked, because Vicious is a company I founded back in San Diego in the mid to late 2000’s. I asked the guy about the bag and he said he’s had it since he was a kid. I’m not sure if he bladed or not, but he didn’t really care that I did.

At registration I received my demo badge, ski pass and two $12.00 food vouchers. I found Gabe and Jonathon and we made our way to the demo area. At Pico, I demoed all the skis that I was interested and only wanted to test out goggles today. I demoed only Smith goggles during the last event, so time I wanted to switch it up. The Giro booth was calling my name and I picked up a pair of their new top of the line goggles.

We made our way to the White Peaks Express Lift. Some of Gabe’s industry friends were in line with us, so we met them at the summit of Mount Tecumseh. We started off on Periphery, which was un-groomed and full of deep soft powder. This is exactly what I was hoping to experience today. Dumping out onto lower tippy and lower periphery, the trails became pristinely groomed boulevards of untouched corduroy.

We headed back up White Peaks Express and Gabe wanted to take the High Country T-Bar all the way to the top. I’ve ridden T-bars many times before and never had an issue on one. This time however, the T-bar slid off my butt and I ended grabbing it with my arms. As I held on for dear life, I didn’t realize how steep the hill was and my shoulders felt like they were being ripped from the socket. As the pain intensified, I dropped one of my ski poles.  Luckily the young agile man behind me was able to pick it up and hand it to me at the top.

I was a bit taken back by how short each trail was. On one run, we skied Scramble, Ruthless Run, Main Street, White Caps, Terry Trails, Old Tecumseh and Lower Old Tecumseh. They could easily of combined them into one name. I feel like they only do this to bump up their trail count.

A cloud had covered the mountain as we headed up the lift for our third run, instantly freezing over my goggles. I couldn’t see a thing and had to clean them at the summit. Heading down The Chute, my goggles iced over yet again. It became challenging to ski without being able to see. I tried not using the goggles, but the ice in the air was pelting my eyeballs and causing my eyelashes to ice over.

I decided to get some lunch, hoping the cloud would clear away while I eat. When I came back outside, the conditions were even worse. Looking over at Green Peak, which is the smaller mountain at Waterville Valley, there was nothing but clear skis.  I made my way onto the Green peak Triple, sitting down on a chair covered in ice and snow. This was one of the slowest chairs I’ve ever been on and took forever to reach the summit. The ice and snow under my butt began to get really cold and I was quite miserable.

I did two runs down Green Peak before looking for Gabe and Jonathon back at the base lodge. Gabe walked out the door as I had just taken my skis off and he was ready to go back up. At this point, the main mountain, Mount Tecumseh, was still covered by a dense cloud. We decided to switch out goggles and head over to the Oakley booth to try theirs out. All the goggle reps say the exact same thing, claiming their newest goggles are the best and clearest goggles on the market. I was excited to try out these supposedly amazing goggles. We boarded the Green Peak Triple for the slow, long ride to the summit. By time we reached the top, a cloud had moved in and covered Green peak as well. And top it off, my goggles were completely iced over again. This time I gave up the goggles and skied Green peak three times with no goggles at all.

There aren’t too many marked glades at Waterville Valley, at least according to their trail map. I convinced Gabe and Jonathon to check out the black diamond glade off of Psyched. Coming into the glade, the trees were spaced out nicely. Then all of a sudden it became very steep and skied off, with lots of exposed rocks and roots. This led us into a blue glade, with some “natural” park terrain features.

I had time for one more run before I had to head out to Lebanon, to meet my girlfriend for dinner. For my final run, I chose Ciao, which was a moderately steep run, which wasn’t to difficult, besides the fact the fact, that couldn’t see anything. By time we reached the base lodge my legs felt like Jello, so it was the perfect time to call it a day. I returned the Oakley goggles without ever being able to see out of them. I must say, that the Giro goggles I tested were pretty damn awesome. I’ve never experienced that kind of clarity in vision with any of my goggles.