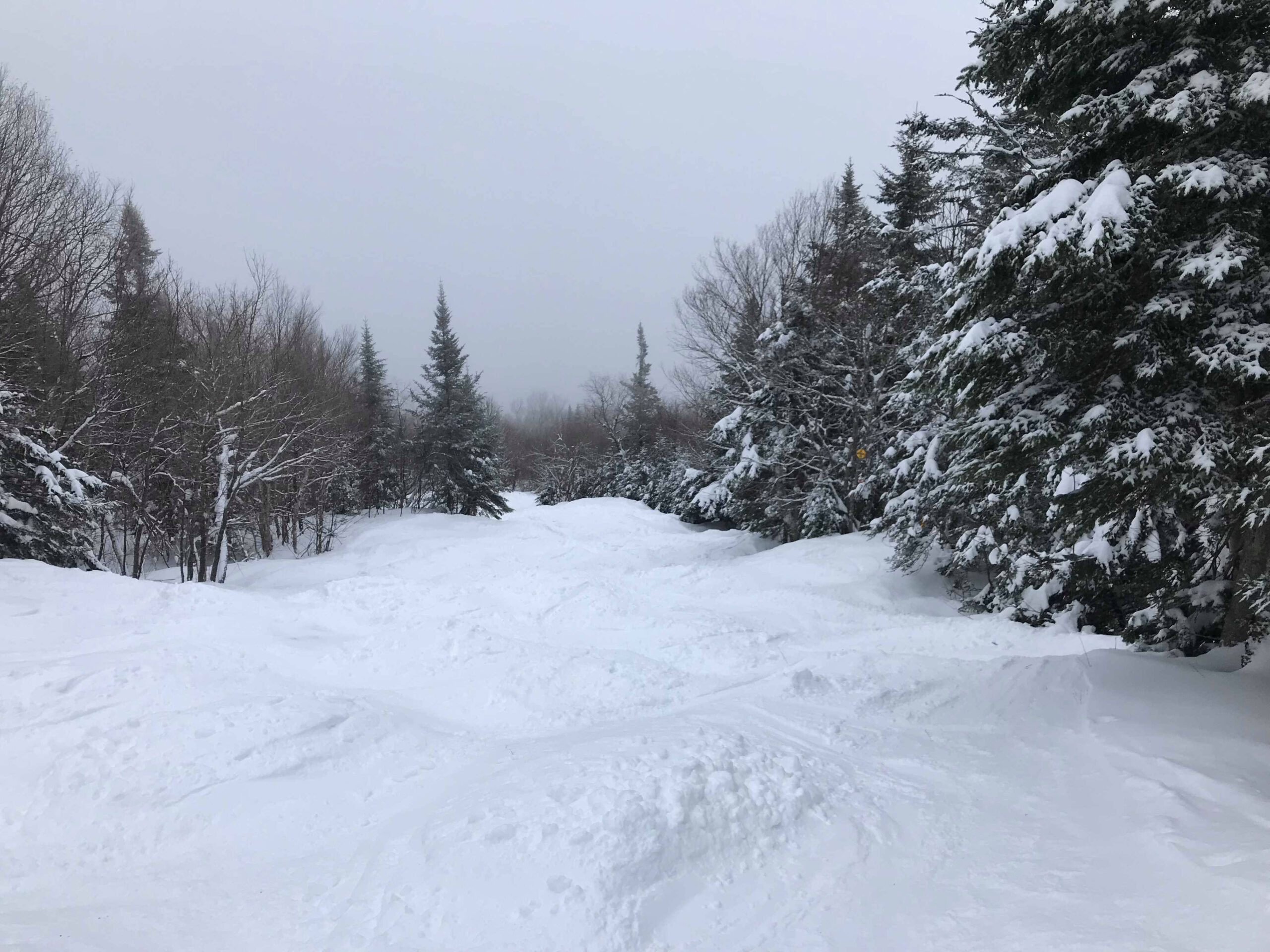 Wednesday night we received 5” of inches of fresh snow, so I had planned to wake up early and make it to Burke Mountain for first chair. I ended up working late, sleeping in and not making it to mountain until noon. I really enjoyed the sight of huge fluffy snowflakes falling, while booting up in the base lodge. I went to check out what trails were newly opened and was pleasantly surprised that some of my favorite glades would be skiable again today.

Straight into the Trees

The first glad I wanted to hit was Caveman, which was plum full of fresh snow. As soon I entered the glade, a dozen under ten year old Burke Mountain Academy students entered the trees and starting shredding on all sides of me. I was thoroughly impressed that every single one of them was way better than me. I let them pass and directly behind them were a guy and his girlfriend. He had some excellent technique skiing through the trees, so I watched him a bit to absorb what he was doing into my brain. Once they moved on, I began my decent, picking up on some of his technique, which made a pretty big difference skiing the bumps and trees. I really love Caveman, and have progressed my skills every time I’m in there.

Next up was Scooby Doo! I entered the glade the same way I did last time, but last time there was more snow that covered a drop-off over a root. I didn’t realize that drop-off was even there, until going over it and losing my left ski. I didn’t even notice the ski had come off until about 15 feet down the path. As soon as I turned around to get it, the couple I’d seen in Caveman passed by me again.

Scooby Doo is a much less traveled glade then Caveman, so there were plenty of stashes of untouched powder to play in. Popping out of the glade I ended up on Mountain Marsh and then cut into the Marshland Glade, which was also very much untouched. I was super stoked to come out onto Little Dipper and having it be covered in huge whale mounds of snow. It was my first time to see anything like them and they were so fun to ski over.

The Conditions Begin to Worsen

On my third ride up the lift, it began raining and instantly turning to ice. By time I reached the summit, my pants, jacket, goggles and boots were covered in a layer of ice. Once I managed to de-ice my goggles, I headed into East Bowl, which was a fluffy mogul utopia. I didn’t see one other soul, the whole time I was in there. It was absolute delight to be able ski East Bowl in such excellent conditions again.

The conditions were severely deteriorating on my fourth and last ride up the lift. My goggles completely iced over on the outside and fogged over the inside. I also started getting some cramps in my legs. I decided to end the day with Upper Power Line, which was completely skied off and with exposed grass, rocks and ice. I then made my way down wilderness, to powder horn, cutting into the flaming eddies glade and then back into Little Dipper, so I could shred the huge piles of snow from the top all the way down to the bottom of the run.