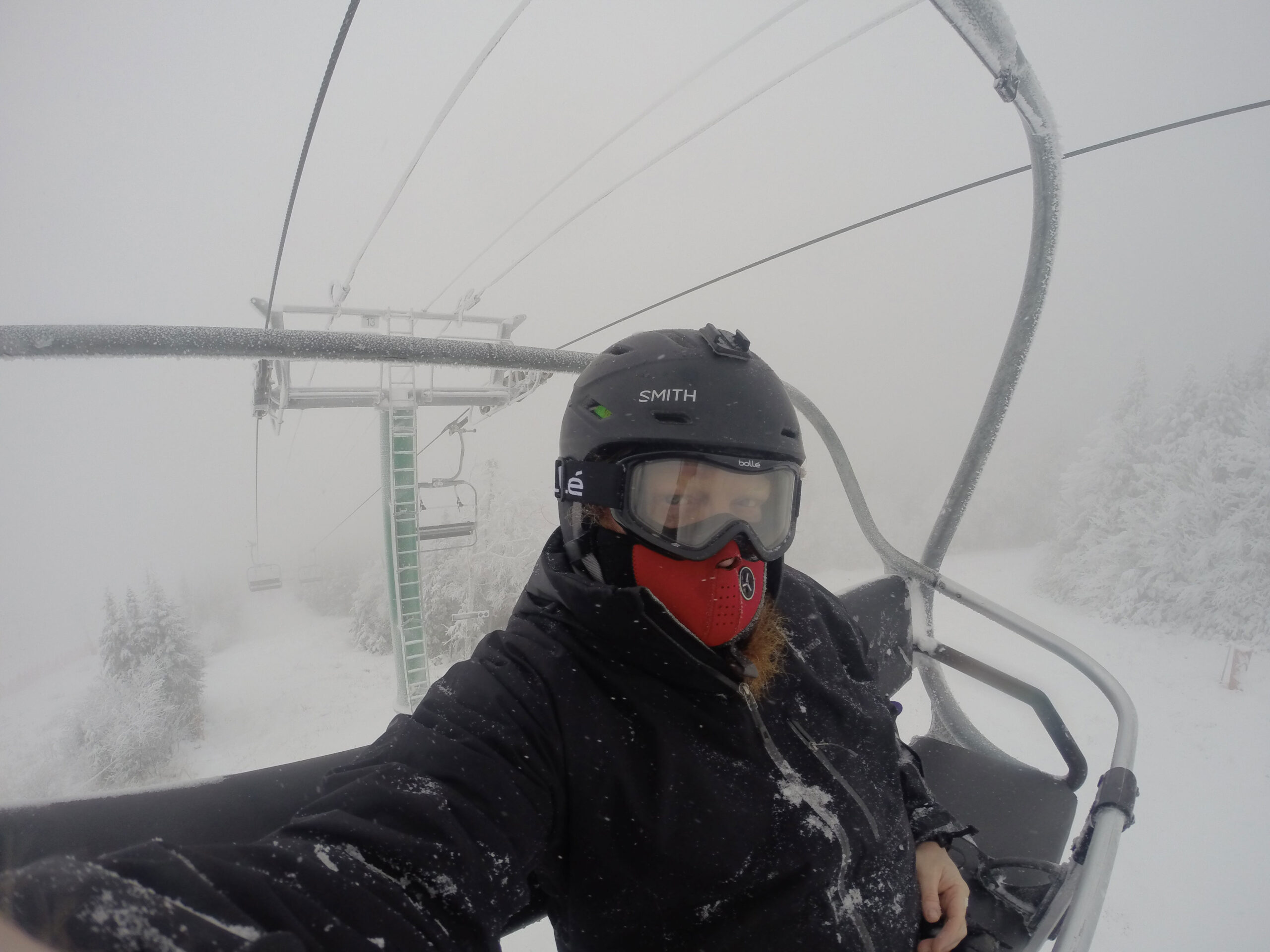 All of Burke Mountain‘s natural terrain has been closed since last weekends rain, thaw and freeze cycle. They have had a little bit of snow this week, but not enough to make any sort of difference. Today, however, Burke was expecting 6-8 inches of snow to fall to add some fresh powder on top of their few open groomed trails.

I woke up this morning to heavy snowfall with a good three inches already on my porch. After running some errands I made it to Burke by 10:30 am. I knew I would miss some fresh tracks getting there so late, especially since the lifts had opened an hour earlier today to support the Eastern Super G Races on Big & Upper Dipper. But even getting there so late, there was still plenty of untouched powder to hit on my first run on the lower mountain.

The lower mountain was fairly warm with clear skies, so when I loaded on the upper mountain lift, I had no idea I was heading into the darkness of thick fog. It was a day and night difference between the two parts of the mountain. On my ride up, a mix of small ice pellets and big fluffy snowflakes, blown by cold wind, were pounding my face.

Between the Super G races and Burke Mountain Academy training, several of the trails were closed including Upper & Big Dipper, Upper & Lower Warrens Way and Carriage Road. This left only Upper Foxes Folly, the Shoot, Upper Whilloughby, Lower Whilloughby and Lower Bear Den open. I decided to start my first decent down Upper and Lower Whilloughby and it didn’t take long for the visibility to take a turn for the worse. Since so few trails were open from the summit, everything was pretty tracked out, with a mix of large snow piles and icy surfaces. It would have actually been really fun on a blue bird day, but it was quite challenging not being able to make sense of what was in front of you.

After my first run I was tempted to go home, but I quickly decided, because the challenge of today was quite fun, to ski down every open trail. My second run was down the Shoot, which dumps you into Upper Whilloughby. Where it dumps you out, I noticed a really cool narrow trail through the trees, which cuts in and out of Upper Whilloughby. I’ve passed it so many times and never noticed it! The trail was a bit too icy for my comfort zone to do today, but it is on my agenda to check out after this weekends snowstorm. I made it back up and down the mountain one more time to cover the rest of the open terrain and then headed out to finish running my errands.

It turns out that the Super G race was canceled shortly after I left, I assume because of the weather, and they opened up Big & Upper Dipper and Carriage Road to the public. By this time I was already in St. Johnsbury and decided the drive back, under current conditions, wouldn’t be worth it. Northern Vermont is expecting a foot or more of new snow this weekend, dumping powder on top of both Burke and Jay Peak. It should be a spectacular weekend for anyone driving up north for the MLK holiday. Most of the natural terrain at Jay Peak is already open and after this storm hits, I am hoping it will revive the rest of their terrain as well as the natural terrain and glades at Burke.