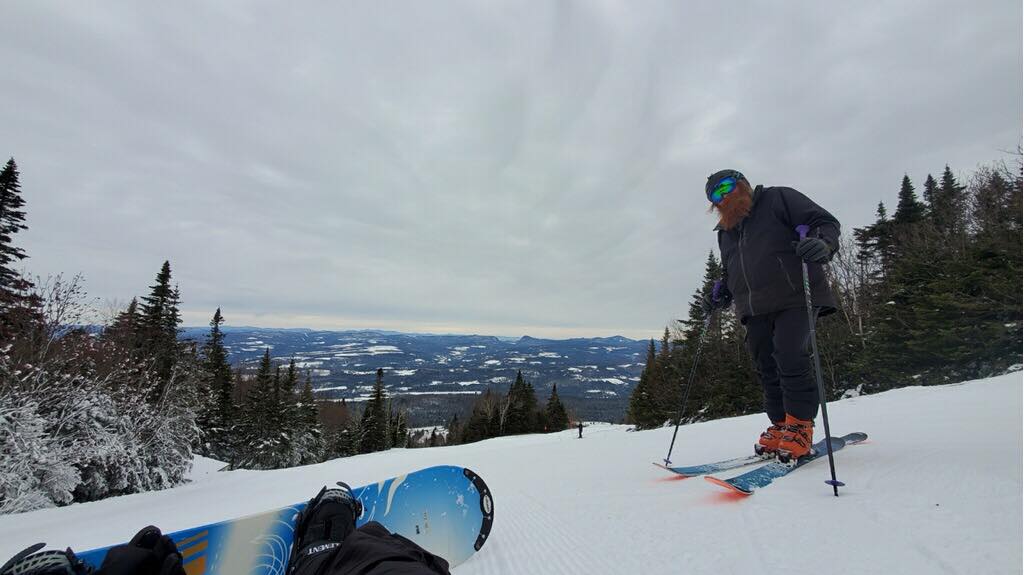 My very good friend, Jarrod McBay, flew out to Vermont from Denver on Wednesday to visit me for a week. This is his first time visiting me in Vermont since I moved here two years ago. Yesterday we met up with some of our other friends at Pico Mountain to attend the On Snow Demo Day. While he is here, I want him to experience my local mountains. The original plan for today was to head to Jay Peak and then ski at Burke on Monday.

The projection of what to expect weather wise this weekend has been all over the place. I was unsure if Burke will get hit hard from the storm, so I decided to take him there today while the conditions were still decent. Last time I was at Burke was on Monday and it was fairly icy, so I was expecting more of the same.

Starting off on the Lower Mountain

We started out on the Shelburne Express lift and WOW, the conditions on the lower mountain were awesome. There was absolutely no one on the runs and we had nothing but fresh cut corduroy to cruise through. After going down Binney Lane and Bunker Hill, Jarrod was ready to head to the upper mountain. I talked him into doing one more run, hitting the last 1/3rd of Jester, which is one of my favorite runs on the mountain.

And Then I Rain Into a Snow Making Pipe…

Jester was fairly washed out and super fast today. I ended up going to high on a berm and launching out of the run back towards Bunker Hill. I didn’t notice that there was a very exposed large metal water pipe, for snow blowing, hidden behind the berm. Cruising at a very high rate of speed, I ended up landing disaster front side grind on the pipe, slipping out and slamming my hip on top of it. Ouch! I rolled over and laid in the snow for a while, knowing that I would have some serious swelling. After a few minutes I skied back down to the lodge to check it out in the bathroom. It was very swollen, but there was nothing sticking out of the skin, so we were good to ride up the Mid Burke Express to the summit.

Just like on the lower mountain, the upper mountain groomers were immaculate. I’m not sure what kind of magic they are performing at Burke to turn icy trails, with no recent snowfall, into beautiful packed powder trails. We had the dreamiest runs down Upper and Lower Willoughby, The Shoot, Lower Bear Den, Carriage Road and Upper and Big Dipper. The only runs that were really icy, with lots of granular instead of powder, were Upper and Lower Warrens Way and Graham Slam. East Bowl, as usual, was a blast and only had minimal thin cover in a few places. Although we didn’t go into the woods off of East Bowl, they looked like they were full of some great, untouched powder.

It was really fun to get to ski at my local mountain with Jarrod. Tomorrow we are driving to Portsmouth, to take a break from skiing for the weekend and skate at Rye Airfield Skatepark. Monday we will be back in Vermont, on the slopes of Jay Peak, enjoying (fingers crossed) some backend snowfall from this weekends mixed precipitation.