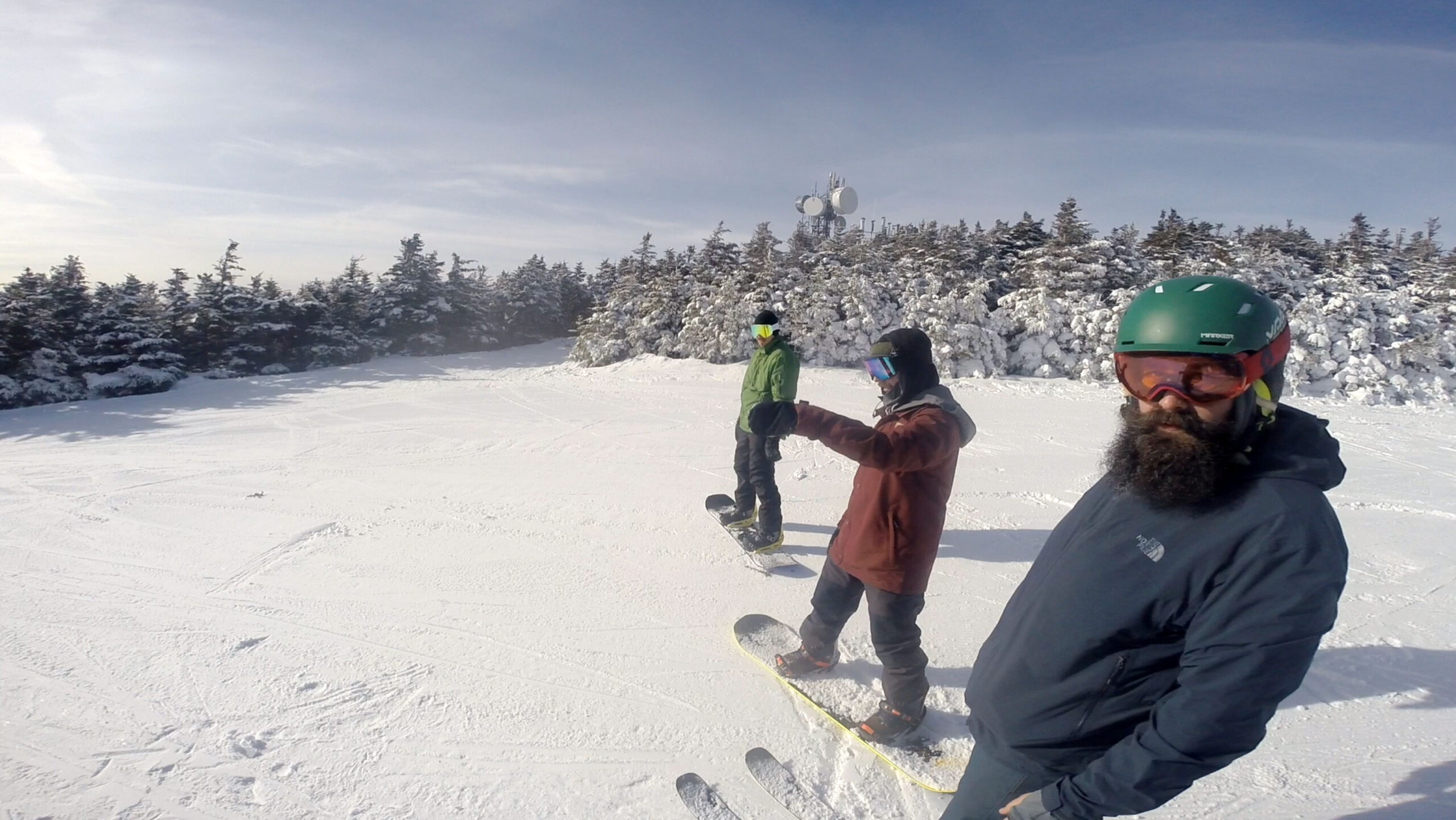 Since I started skiing last season I have wanted to check out Pico Mountain, which is the home mountain of my friend Myles Cotter-Sparrow. For those of you who don’t know Myles, his family used to own the legendary Zero Gravity Skatepark in Rutland, he currently works for Rollerblade and he helps me host the annual New England Blade and Camp (NEBC). I finally had the chance to ski there with him and my friends Gabe Holm (of Thuro Shop in Boston) and my longtime skating friend, Jarrod McBay (from Denver) on Thursday, for the On Snow Demo Day.  I went to Demo Days last season at Stratton and Loon and had a blast trying out different gear.

The Conditions and Arriving to Pico

I wasn’t sure how the snow conditions would be at Pico with the current poor weather in Vermont. Last week I’d driven past there and it looked pretty grim. Arriving at the mountain I could tell not much of the terrain would be open, but was looking forward to experiencing a new mountain.

We arrived at 8:30am and quickly grabbed our passes before making our way to the demo booths. I’ve been experiencing a lot of issues with my goggles fogging over this season. I have two different pair; both on the cheaper side, that outside of the fogging issue provide me with constant poor vision. I made my way over to Smith and demoed their high-end Smith I/O MAG™ XL goggles to see how they performed. As soon as I put them on my face I was blown away. I experienced the best vision I’ve ever had on the mountain in these. I would love to own a pair but can’t justify spending $300 on goggles that I would probably scratch in the first week.

Having skied for only a year, I’ve progressed fairly well. However, I’ve mainly skied by myself, learning from watching others on the mountain and trying to imitate the techniques of the racers at Burke Mountain Academy. Myles wanted to get me on some carving skis first, so that he could give me some pointers on working my edges. The first skis we demoed were the Nordica 75 GT. I’m skiing a pair of Blizzard Rustler 10s, so these were completely foreign to me. We made our way down Goldrush to go through some carving drills. While Myles’ coaching help refine my skills, I wasn’t very comfortable on these skis.

We headed back down the mountain and I switched them out for some Nordica Enforcer 93s. This time we rode the lift to the summit and skied down Forty Niner. Compared to the Rustlers, the Enforcers are not nearly as playful or forgiving. I took two runs down Forty-Niner on them before heading back to switch them out for some other skis.

Comparing the Blizzard Rustler 9s to my Rustler 10s

The next skis I checked out were the Blizzard Rustler 9s. I had demoed them and the 10s last season and loved them both. I ended up picking up the Blizzard Rustler 10s for this season, but now that I had skied them, I wanted to compare them to the 9s again. I was instantly confident and comfortable on them, so I wanted to check out some other trails. Myles took me into the bumps of Upper and Mid Ka and I fell in love with this trail. Although it was a bit icy with thin cover, I experienced full euphoria on this run. Next we checked out the Summit Glades and Summit Glade East trails. This run reminded me a lot of East Bowl at burke. I would love to ski these again in prime conditions.

The last pair of skis for the day I demoed was the Völkl Mantra 102s. I wanted to try them out because I had recently read an article that rated them as the best all mountain skis. I skied down Upper and Mid Pike as well as Forty Niner several times on them. I REALLY enjoyed these skies and am tempted to pick up a pair to add to my quiver. Although not as playful as the rustlers, they provided me with more control and I feeling of security at high speeds.

The open trail count may have been fairly low, but all the open groomers were in excellent condition and I had an amazing time on the mountain. Myles was right about how awesome Pico is and it reminded me a bit to Burke Mountain. As soon as they get some more snow and conditions improve, I will be back to explore the mountain with him.