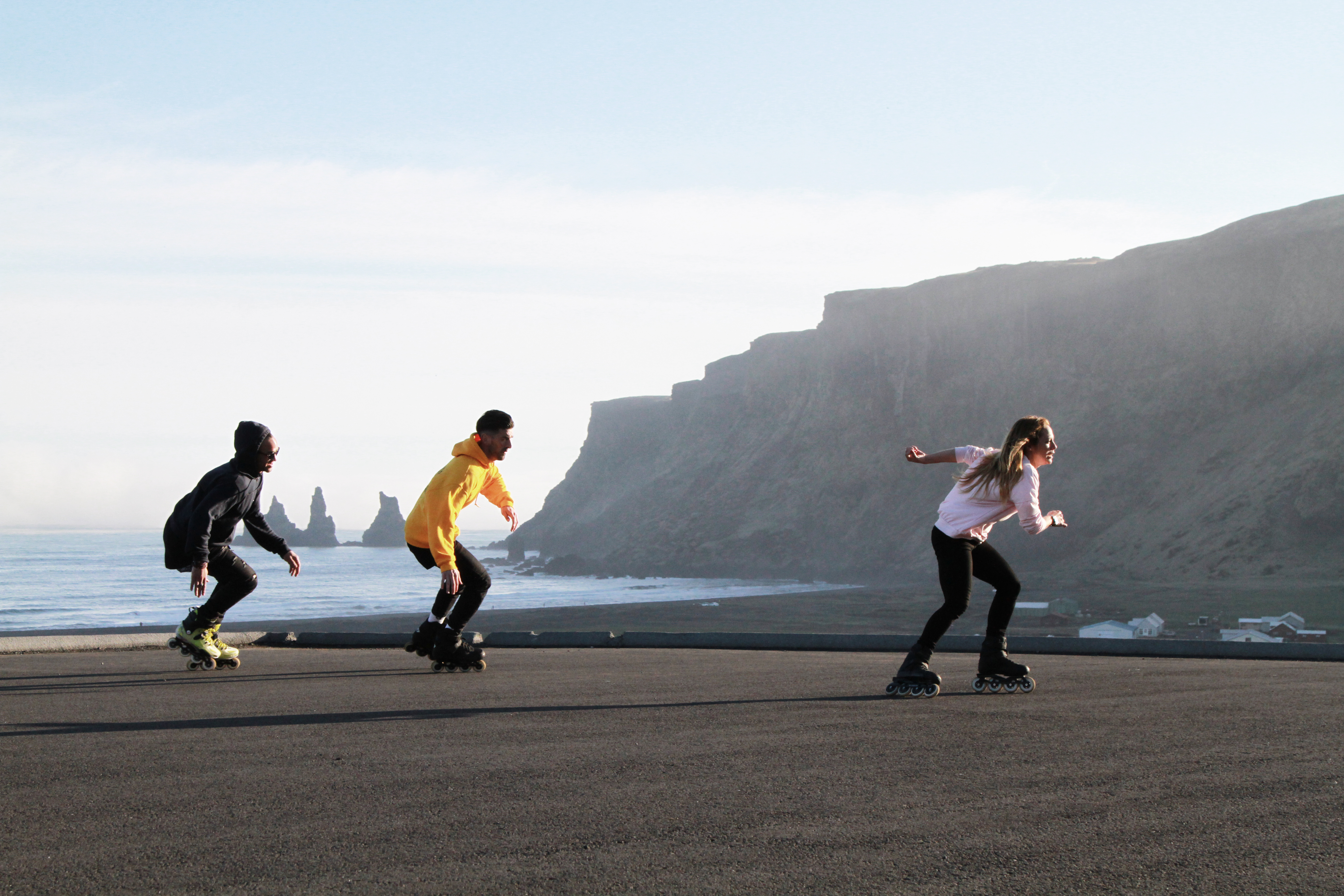 Sven Boekhurt and Niels Groenendijk have been working hard for years now creating and producing wonderful skating content for Rollerblade. They decided to convince Rollerblade to let them create an 80mm freeskate series, where they would travel to major cities around the world to not only showcase freeskating, but also the cities themselves. The Shanghai 80mm freeskate video they made received over a million views! Rollerblade was very impressed by this and it made them realize that the edits Sven and Niels were producing were working to promote inline skating. As a result of the success of the Shanghai video they were given the option to film in any two locations in the world this year. The first location that was chosen was Iceland.

Why was Iceland chosen for a freeskate edit? How did you guys find the locations to film at?
Sven: We gave Rollerblade a list of 4-5 potential places for us to film at, and they picked Iceland. It was also my personal pick, as I have been there before and knew how beautiful the scenery would be to showcase freeskating! We did research at home and made a plan of places to go to each day. This schedule was subject to change if we found something sick along the way. Which happened many times, especially when the sun was going down.
Niels: I have been working for Rollerblade for four years now and ever since the beginning there has been freedom in the concept and realization of the projects! We started with Cityexplorer and we combined our next project (80mm) with Sven’s Cityhopper project! Most of the concept Timmy Vanilli and I came up with. We suggest locations that Rollerblade was able to pick from. For this project we suggested Tokyo, New York, São Paulo and Iceland. Together with Sami and Sven of Rollerblade we decided on Iceland. I scouted some locations online, but having already filmed in fifteen cities, I realized the difficulty in planning locations for skating shoots. I knew that in a place like Iceland, we could easily drive around to find perfect locations to shoot at.

Iceland is one of the most majestic and scenic countries in the world. What was going through you head while skating and filming there?
Sven: I had such a happy feeling being able to stand on a mountaintop, in a country with no pollution, where the sky is so clear you can see as far as your eyes allow. It is hard to stop exploring when you think you have found some the most beautiful scenery in the world and you turn the next corner and it only gets better. Being in Iceland is an incredible adventure.
Sofi Carreras: Before heading to Iceland I thought I might not be able to skate and possibly die from the cold and extreme weather they have there. Once we arrived the weather conditions ended up being the complete opposite of what I thought it would be like. Some of my friends from Argentina had been to Iceland before and told me that it looked a lot like Patagonia. They were right and I did feel a bit like I was back home. The most incredible thing about Iceland is how peaceful the huge landscapes you come across are. The Icelandic people live in a place where nature comes first and its inhabitants respect and follow its rules. When you drive down the mountains, being the only car on the road, the large magnificent views make you feel so small. The scenery truly is amazing.

What was your favorite place you skated there?
Sofi: My favorite spot was a descent we made down the middle of the mountains. There was nobody on the road, the speed was perfect and allowed us to enjoy the scenery. It was so much fun!
Timmy van Rixtel: We drove up into the mountains until we saw people skiing. Then we started downhilling through some amazing scenery and experienced snow and sun at the same time.

How was skating through Reykjavik?
Sofi: Skating there was great! There are very few traffic lights and almost no traffic, making it easy and safe to skate around. We made a fun descent through the city and the people loved it! I do not think they have ever seen anyone blading through their city before. It is such a lovely city, when nightfall comes around; Reykjavik becomes a very special place.
Timmy: Everyone there was really friendly and loved seeing us skate!

How was skating in Iceland different from other places you’ve skated?
Sofi: In the past we have always skated in big cities, full of cars, noise and pedestrians. This time around we were skating in the middle of nature and it was absolutely perfect! The distances are long and the temperature drops suddenly at night, but with so many hours of light, you can make the most out of the day. Iceland gave us some incredible sunny days, although it is true that the weather changes every ten minutes. The great weather allowed us to take some amazing photos. We were very lucky!
Timmy: I could not get over the fact there that there are almost no trees in the city or the country itself. We were lucky the weather was good while skating there.

What camera / drone setup was used for filming this?
Niels: It was filmed on a Sony a7sII with multiple lenses, a Came-TV Gimbal and a Mavic Pro Drone.

What were your favorite shots in the edit?
Niels: I like the more cinematic shots, I love the shots of Sofi and the drone shots are just out of this world!
Sven: Flying the drone! It was so cool!

How has it been working with Niels on theses projects?
Sven: I have known Niels for twenty years through aggressive skating. We have been working together on video projects for several years now. We spoke a lot on the phone before this project and shared locations and ideas. The Cityhopper shoots we did together were more stressful since we had to plan and shoot two projects at the same time. This sometimes became a bit too much. I like the way Niels films and chops together the clips to create his final projects. The great thing about Niels is that he can make and deliver animations, logos, photos and videos for a project all by himself.

How was this project different then other projects you’ve work on?
Niels: On past projects we went to Brazil, Marrakech and Cape Town, which were either extremely hot, unsafe or had other challenges that made filming difficult. This was the easiest project we have worked on by far. Iceland is very safe and we had perfect weather. Having a rental car and Sven helping me film made everything come together effortlessly.

How was the food? What did you all do when you weren’t skating and filming?
Niels: The Food was so expensive! In fact everything there was super expensive, which is the only thing that would keep me from going back there again. During our free time Sven was doing the plank challenge, Timmy and Jeremy were listening to hip-hop or going live on instagram, Sofi was on her phone and I was working on my laptop.
Sofi: The typical food is based on fish and meat. You can eat whale, shark, seal or moose anywhere. I did not dare to try any of it though! Something very typical is the “Pylsa”, a hot dog that was very delicious! When not skating, we spent some of the nights going out and having drinks and discovering how the people here have fun. When not going out we would spend time together listening to music, reviewing photos and videos from the day or discussing the world of skating.
Timmy: The food was good but really expensive. We had very long days of filming and skating, so when we were done we mostly just chilled out and enjoyed the beautiful Icelandic views.

What was your favorite part of being in Iceland?
Sofi: The landscapes are so surreal that they make you feel like you are living inside a movie.
Timmy: I loved being together with the whole crew again, Sofi, Jeremy, Niels and Sven!

The Iceland 80mm edit and all photos in this article were created by Niels Groenendijk for Rollerblade™.
www.nielsgroenendijk.com | www.rollerblade.com