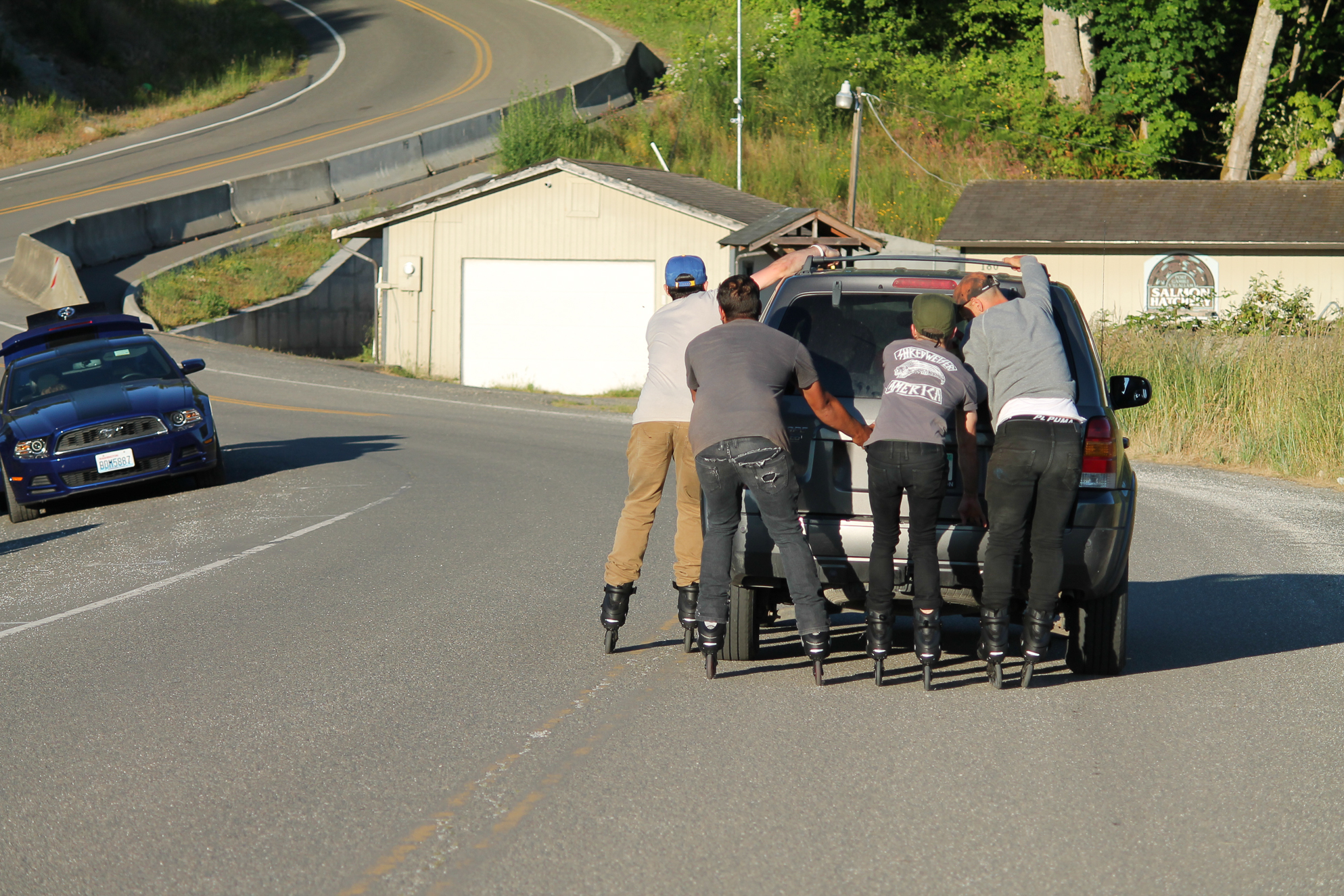 The North West Shred Tour is an annual rollerblading and camping trip that happened at the end of June in the state of Washington. This trip typically focuses on skating different skateparks in the Pacific Northwest, while camping in some of the most beautiful and scenic locations. This was the first year that there was a notable presence of big wheel blades, courtesy of Daniel Mohr and K2 Skates. I sent some questions to Levi Sebastian, Jeremy Townsend and Billy Prislin to shed some light on what went down on the big wheels this year at the NWST.

What made you want to try skating a big wheel setup?
Levi: The Big Wheel Blading Instagram! I’ve also been Powerblading. And now that I am getting older I’ve realized I love everything about rollerblading! Wheels on my feet, I’ll be good from there!
Jeremy: Insert Ricky Bobby voice “I wanna go fast”
Billy: It is harder to trip on sticks and stones and they are good for rough terrain. I have a background in inline skating, so I thought big wheel blading would be a more fun exercise and better form of transportation than riding a bicycle. I also like that I can skate in creative new ways with big wheels!

How many people tried big wheel skating on NWST this year?
Levi: Shout out to Daniel Mohr at K2 for bringing several pairs of 3 and 4 big wheel setups for us to try! The the day in Kingston we had ten to fifteen people try them on and bomb the S curve hill on the Indian Reservation we were staying on!
Jeremy: There was actually more than I could count!

Levi, Brad Oz shot some photos of you forest blading on this trip. What was it like for you skating a completely different terrain?
Levi: Wow, it’s basically the start of something new for myself. I get this strange rush riding organic material vs. our concrete jungle we have everywhere. Billy Prislin, Jeremy Townsend and I finished bombing hills, when we road up to the Portland dudes (shout out to every blader in Portland!). Brad had heard I was riding logs in the woods and he happened to have found a perfect downed log that worked as a drop in. Jeremy and Brad set up the lighting and after fifteen separate drop-ins, I laced that fast plant to drop in!

What was the most difficult thing you tried to skate on the big wheels on the trip?
Levi: The hill loops at our Heart O’ The Hills campsite. This is where all the forest skating went down. There is footage of myself first person front flipping into the woods. Looking back, we should have kept it going a few more loops!
Jeremy: I cruised around one of the parks but on the last night I did some hill bombing at a campsite in the Olympic Mountains. No clue what I was getting myself into and ended up frightened on the first go. At one point we almost t-boned a car backing into a site. Another time Levi Sebastian was trailing behind me with a camera and launched like a torpedo into some bushes at 30mph.
Billy: I didn’t really do any tricks or stunts on the big wheels. So the downhill we did was definitely the most difficult. It was fun and terrifying at the same time. Like when you don’t feel 100% in control. When you are flying around the turns they all feel pretty close you watch your feet hoping the wheels don’t slip out.

Did you have any falls?
Levi: Ha-ha omg dude! Too many! I love the forest for this though! It’s so forgiving and there’s this extra element of fun, because it’s all so new but familiar. I would say my front flip in the woods and also the large gash I received from eating shit on the Brad Oz shot where my worst falls.
Jeremy: On the big wheels no. I did however get talked into doing a flat 540 at the Port Townsend skate park that didn’t end so well.

What was the best park you went to for grinder blading?
Levi: Oh wow, Port Orchard was a great big skate park that had everything to skate. It is one of those places you just keep thinking of new things to do after you’ve already left the park!
Jeremy: Port Orchard skatepark. There was plenty to grind there, but I pretty much just sessioned the down ledges.
Billy: My favorite was Gig Harbor or Port Orchard.

Jeremy, how do you enjoy skating parks in trimax frames?
Jeremy: It’s not really my thing; I guess it would depend on the park though. The speed and flow is definitely chill though.

What was your favorite campsite on this trip?
Levi: In my opinion it was Kingston, Washington. Thanks to Aaron for asking the entire S’Klallam tribe if a bunch of bladers could camp on their reservation. It was a magic place of legal fireworks, beers, buds and fresh K2s for a morning of hill bombs with amazing people. The Tribal Police were cool with us downhilling and getting pulled by cars back up the hill.
Jeremy: Heart o’ the Hills for sure; we had to go back for seconds!

What was the best most amazing scenery on this trip?
Levi: This whole trip. Holy crap Washington…. your are beautiful!
Jeremy: One of the best scenic locations for me was when we crossed the ferry from Vashon to Point Defiance. The view of Mt. Rainer was also pretty epic.
Billy: The park with the blue coping! It was just a pristine beautiful park in the middle of all these trees and with fresh air!

After this trip do you plan on skating big wheels more?
Levi: Of course! This is just the beginning of more fun. I’m juiced!
Jeremy: Yes, I also have some Powerslide off-road skates that I need to bust out more!

Was there anyone else shredding the big wheels on the trip?
Levi: Jeremy Townsend hit the Kingston park pretty hard. But there really was not a lot of big wheel skating, which is totally understandable. I’m pretty sure Noah Neuber and Shawn Oberg had their coyotes with them but I’m not sure if they did anything.
Jeremy: Billy Prislin was ripping it on his Flying Eagle skates and I saw a hand full of other people getting down.

What skates would you want to try next?
Levi: Flying Eagles, I’ve heard too much about the, recently to ignore.
Jeremy: Hopefully Powerslide sees this…Imperial Megacruiser 125 😉

Best part of NWST?
Levi: That we have something like this around still! It reminds me of the ASA days where you get to skate with everyone regardless of skill level. Thanks to Daniel Mahr for bringing K2 demo skates on the trip and really adding an extra element of fun!
Jeremy: It was my first time to test out my rooftop tent so that was sick! It’s always good to get out with the guys for a few days. I was grilling up some epic meals too!
Billy: Just opened my eyes to skating in the northwest and some youth of the sport.

Where was the downhilling through the woods at that Jeremy Townsend posted?
Levi: Heart O The Hills – c and d loop baby! This spot was so legit myself, the Portland crew, Jeremy and Billy all stayed there again on the last night. The last night is when all the forest skating went down.