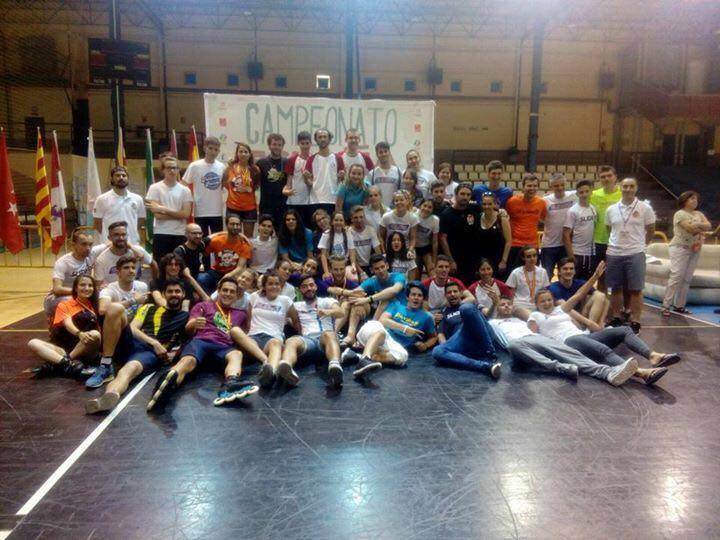 I had just finished traveling around Hong Kong, New Zealand and Viet Nam and I was home for two months. I felt that I would really like to visit so many friends in Spain, visit new places and do interesting stuff. At the same time, my club asked me if I wanted to compete in the Spanish Championship so I eagerly checked the calendar and started to plan in my head so many castles in the sky.

At first I thought about going by bike, stopping in some cities and finally reach Ciudad Real, where the Championship was going to be held. Soon I realized that I could organize something bigger. I could tour around Spain teaching freestyle slalom. I asked some people and they were very happy with the idea. In a matter of days I contacted many people and several cities were already confirmed.

Due to limited time I decided to just go through the East coast and some inner cities nearby, leaving the entire North, including the big region of Castilla y León untouched. I finally decided to go by car and enjoy the drive.

I got in the car, experiencing the wonderful feeling of freedom and lack of rush, the sun was slowly setting down, my favourite music was playing, and I lowered the windows. The adventure had already started!

To be honest, I left home with the feeling that many things could go wrong, even though I had all the dates and places confirmed. It was an adventure and the first time doing something like that so I assumed it wouldn’t be perfect.

During the tour there were moments when I was exhausted, having slept very few hours and having to drive early for a morning class in a different city, but for me it was totally worthy since I had the chance to spend time with my friends and to instantly make new ones. In almost one month I visited fifteen cities, drove 3,500 km, felt a different air, sometimes humid like the sea, sometimes dry like the Monegros dessert or deep inside Castilla La Mancha and lived one of the most memorable experiences of my life. I visited only half of the Spanish territory but I could totally appreciate the big diversity we have in this country. Also, as it is publicly known, I’m a foodie and Spain is a heaven for people like me! It is so diverse, so tasty and, in general, so healthy. From the Mediterranean cuisine, which I already know well, to the powerful dishes from Albacete, in Quijote’s lands, to the pescaito frito (little fried fish) in Cádiz and other delicious tapas in amazing places such as Granada and Sevilla.

Thanks to the visit I paid to my friends in Sevilla and our long and hot training sessions there the previous week, I arrived to the Spanish Championship in Ciudad Real feeling quite strong and technical, confident with my runs. I liked the floor and, while everyone was complaining about the heat, I was more than used to warm temperatures, so I felt great. I did well winning a first and second place in Battle and Classic respectively. It was a great weekend where I encountered some old friends and where I made new ones that I would meet on the following days.

Unfortunately, this competition made me realize that the sport in Spain is not developing as fast as one could imagine. In any other sport it would be impossible that someone that has neither competed nor trained for competition for the last 3 years takes the first place of a national championship in Battle. Obviously, it was not an easy to win, I gave it all, I had the support of my friends, I felt good and I had a whole new trick that unlocked the very same day of the competition, but still, I trained a lot one week before only. My rounds contained high technique tricks and combinations and I performed them clean, but before the competition I could not reasonably expect to win it after such a long break and such a short, although intense, training.

feel so lucky and grateful to have the opportunity to do such a great tour and have the trust of so many people that opened their doors to me, showed me around, organized the classes, etc. For me that was the best part of this trip: the people and the relations I made, closely followed by the skating through all these incredible cities, the slalom sessions, the hard trainings in the South and the renovated motivation to train and improve in the eyes of my skating friends. I feel a great joy in motivating people to achieve their goals and it happened a lot during this trip!

II am looking forward to repeating this amazing experience and to giving a try to the North and other areas of Spain that are unknown to me! After all, this tour allowed me to mix skating and traveling, two things that are in my DNA and that I do not conceive my life without.