Checking in with the Blade Ventures South America Tour 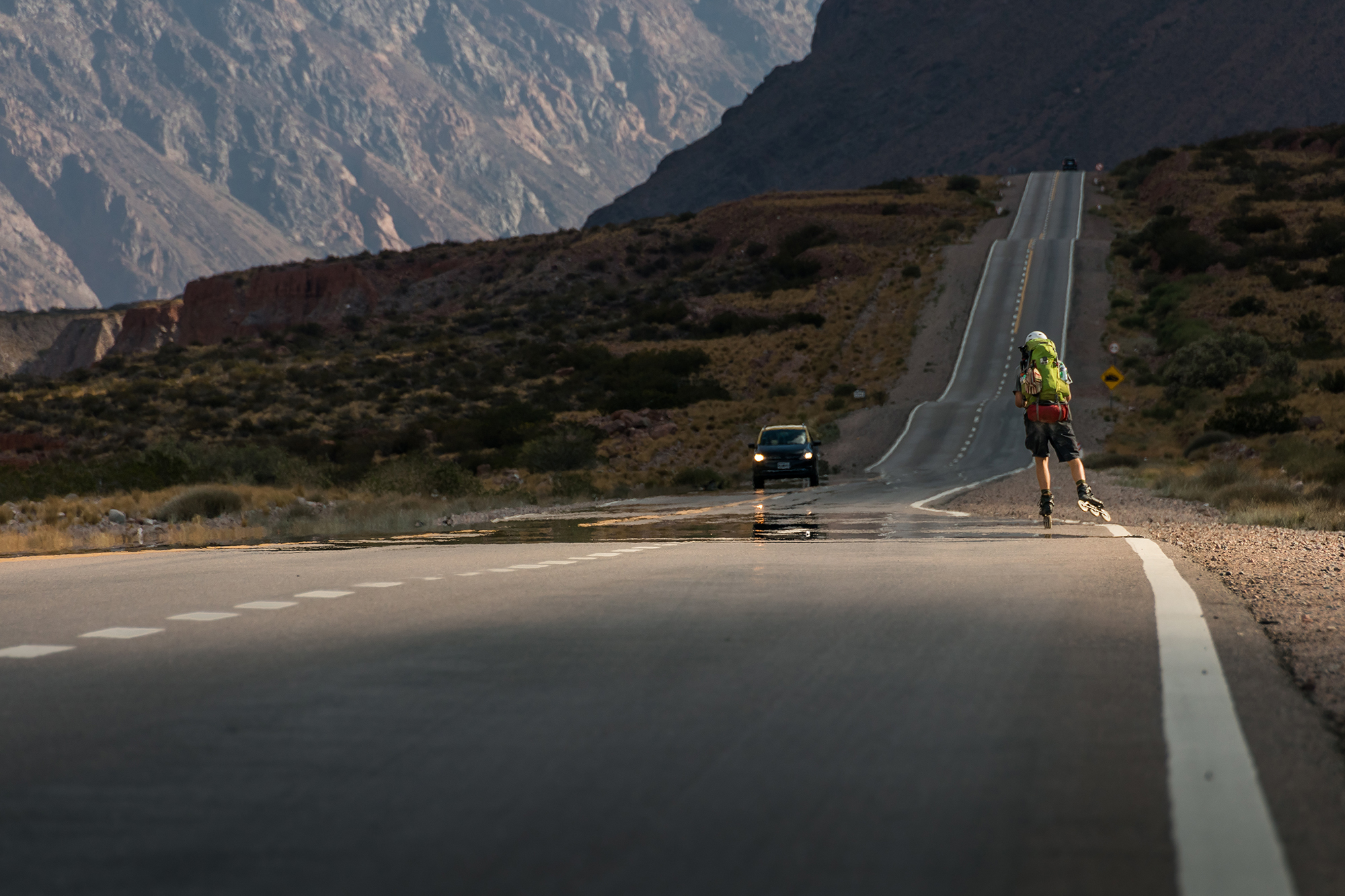 Marian Sorge and Santiago Lopez are well into their 7000km skate through South America. In between their long distance skates, they have been stopping in major cities to aggressive skate with the locals and Big Wheel Blade around to check out the sites. They left Europe Oct. 22nd and began their skate shortly after. I wanted to see how their trip was going, so I contacted Marian with some questions about tour.

How long have you been on the road? And Where are you now?

We’ve been on the road since late October 2017 – our journey as backpackers on wheels began in Rio de Janeiro, Brasil after we spent a week in Rio to film for an episode for our documentary and do some last preparations. Right now we have already crossed the Andes and we are moving along the coast north of Valparaiso in Chile.

Did the start of the trip go as planned or were there any problems getting started?

Más o menos! As they say here: more or less. We certainly had plenty of work to do back home in Germany. I myself was finishing my studies at the university, while working and preparing for this trip. Which included crowdfunding, communication, presentations, and all that stuff that you have to do proper to gain sponsors and partners for a somewhat odd sounding idea. That was the biggest challenge for sure so we were quite relieved as we actually sat in the plane heading to South America after 1.5 years of preparing for it.

What cities have you been to so far?

This was our route: Rio de Janeiro – Sao Paolo – Curitiba – Florianopolis – Porto Alegre, all in Brasil, then Montevideo in Uruguay, Buenos Aires in Argentina, heading west from there through smaller towns to the last bigger city before the Andes, Mendoza. After crossing the border to Chile at the most epic border possible we went through Santiago de Chile and now just left Valparaiso. Feel free to look it up in maps. We usually stay longer in the bigger cities to do some Aggressive Skating as well and to hang out with local skaters.

Has the trip so far gone as smooth as you had planned? Have you had any unforeseen problems on the trip?

I’d say it went fairly smooth I guess. Most of the problems we saw coming, no big surprises luckily. We’ve had some issues with our drone so we had to repair it in Germany and our third crew-member Peter who joined in Buenos Aires brought it to us. A lens got stolen in Brasil, too. We are a bit tight on the budget, because of unanticipated costs, but nothing that endangers the project.

How many miles are you averaging a day?

We have a good average of 50km (31 Miles). That is a good daily pace so your feet recover from it. Sometimes it’s less, sometimes it’s more. The max distance was 81km (50 Miles), which was intense towards the end. This is also how we plan the next day, we have a set destination. We usually make it. Body is fine again quite quick, feet hurt the most it seems.

Have you had any problems with your back or knees skating with a backpack?

With something like 22kg (48,5 Pounds) including water we are hopelessly overweight with all the gear and so on. Picking up the backpacks sucks big time, but once it’s all strapped it’s kinda ok. Luckily nobody has back or knee issues. Peter had some knee surgery a few years ago, but he also is fine. The back and leg muscles grow with the task I guess.

Has anyone been injured?

Yes, we’ve had some minor injuries. No real bad bails on the road with backpacks though. We hope that never happens! But from Aggressive Skating or from speeding in the city a few bruises. I painfully dislocated my thumb while surfing in Brasil, that kept me hindered for a good month. Santiago still has a painful wound in his palm from a fall and Peter punctured his hand in between his fingers while setting up tent. It should have got stitched but as the Argentinian hospital only had glue he declined to do so. No comments on that. We’ve got it all on tape. Apparently his trip is dangerous for our hands.

What are the best parts of this trip so far?

The ever changing landscape and how different it can feel. The change of perception when you enter a new place or when you see how it gradually changes, like skating South Brasil with hills and so on and then later you see open flatlands in Uruguay and Argentina, well, until you see the first Cordilleras of the Andes abruptly rise from the flats. The other best parts is meeting people. Lots of friendly and hospitable people. The surprises. Oh, and when the ground is nice and smooth, no wind from the front and no hills, little traffic or a wide side lane. That seriously makes one euphoric to be able to speed. That tunnel feeling is rare tho.

There have been many. Brasil has a lot to offer. The flatlands of Uruguay and Argentina are freeing in way, the openness is enjoyable. But a humbling and most impressive experience was skating in the Andes of  vast changing landscapes: hanging, harsh, dry, lush, dense, open. Cold, warm. Crazy formations and the overall magnitude of things are unforgettable. You come around a curve and you go like “oofff! Wow, seriously!?” Peter is a geographer and I also have some interest in geology – so we would read the landscape. Contemplating the time and the power behind all those processes which makes it even more exciting. The trip gets a bit geeky sometimes.

What was your most difficult day of skating?

Days with strong head winds are just bullshit. We’ve had one like this in Uruguay. That was not fun. Steady wind in the face and 50km of a very slight uphill, including speeding cars and harsh sun. That day ranks high. The other one was in the Andes. Different ball game. 10km felt like 30, we were seriously slow, even downhill. Pushing downhill! Long climbs at high altitude. No comparison to the day before.

Worst thing to happen on the trip?

Someone new joined you, who is he?

Yes, his name is Peter Eberlein. Seriously cool and clever dude with the right mind set. He also just finished his studies in geography, he is an excellent skater on big and small wheels and a good contribution to the group. Glad to have him. He carries two of our lenses, too.

We are heading north, next on the list will be the Atacama desert including an episode about the European Southern Observatory (ESO) south of Antofagasta. From there we will take a detour to Bolivia to shoot at the dry salt lakes of Salar de Uyuni, followed by Titicaca-lake and then crossing over to Peru. Should be an interesting part.

Are you nervous about any parts of your trip coming up?

Nervous no, not really. I guess we are a bit worried about how it will be skating the Atacama with no shade or much water. We have to plan these parts more carefully. But we are relaxed about not being able to skate certain bits since this was clear all along. The total amount of skating is aimed at about 7000km (4350 Miles) while the actual trip is more like 10.000km (6200 miles) because we knew some parts are simply not skateable.

How have the roads been?

Diverse. Most of them were skateable actually. Skateable is a stretchable term here. The pavement changes all the time and you have to be watchful for cracks, stones or random things in your way from tire parts to roadkill. Sometimes there is a side lane, most of the time there is none or it’s not usable because it’s just rough. In Brasil the roads have big climbs and downhills throughout the day, no long flats apart from the very South of Brasil. In Uruguay and Argentina on the way to the Andes the roads are very flat, so that’s good and efficient skating most of the times. Andes is a topic of it’s own and now in Chile we have hit the great Panamericana. We will follow this road for another few thousand kilometers. Right now the side lane is quite bad actually so heavy swearing all day is what there is left to do.

How many wheels and bearings have you gone through?

We have about one set of 125mm every 700km, so 10 sets for the whole trip.
But it depends on the surface and overall conditions, they would last longer but the worn down wheel gets slow too. It’s a good calculation considering the extra weight they have to carry all day. We have several checkpoints along the route where new wheels and bearings are waiting for us.

Have you met some cool people on this trip?

Oh, yes – plenty. We are meeting a lot of new people all the time and it’s great. Sometimes they are skaters in a city we cross, sometimes people we meet through couch surfing or friends of Santiago and sometimes it’s random encounters. Some of them turn out to be interesting and we feature them in the documentary or we record some interview so it’s not only us speaking. It happens quite often that someone is just asking about the skates when we pull over for a break or so. We say what we do and it surprises people and you get into a conversation easy.

Has anyone attempted to rob you?

Nope. We are careful and we pay attention. So far so good.

How do people on the routes react to you skating?

We get honked at quite often and most of the times it’s a friendly honk and they wave at you or give you a thumbs up. You get assholes too who honk to show you they are annoyed by your presence. When we pass people they usually watch you with a surprised look on they faces and sometimes you here them say „mira!“ – as in „look!“ We’ve been invited to TV-channels or radio stations and very often people want to take photos with us.

Any problems connecting to the internet? Cell service?

Yeah, there is some internet most of the times, of course in certain places where there is nobody you’ll find no WIFI. But it’s common for restaurants and so on to offer free WIFI. We have sim cards with local numbers and some limited internet for navigation and communication.