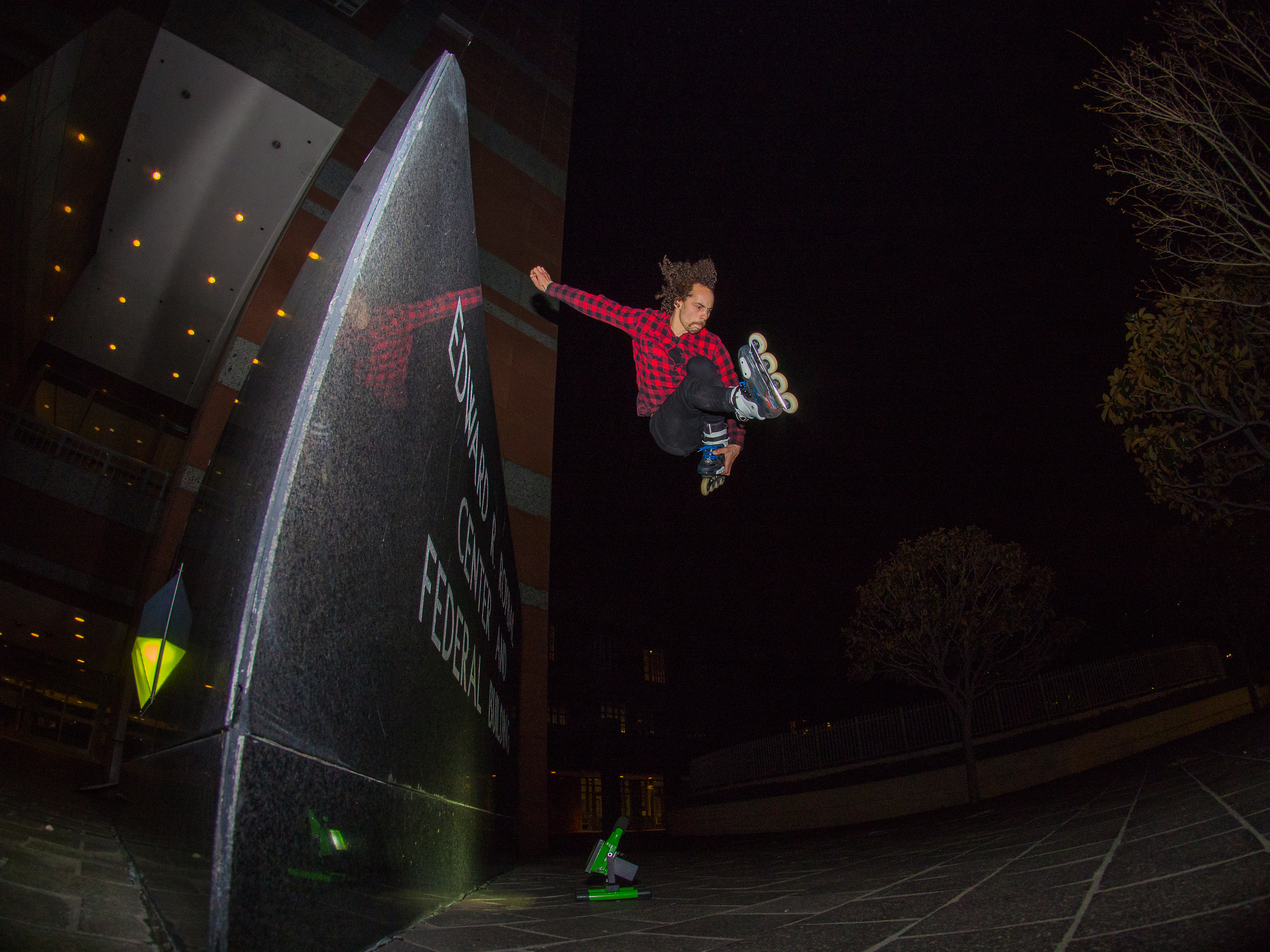 Sascha Simms is a 31-years-old aggressive skater from Keene, New Hampshire currently living in Northern California. Sascha has been skating hard and killing street spots for years now. But he really caught my eye, when I happened upon his NOGRINDS edit that he posted on facebook. Sascha scored himself a pair of vintage K2 recreational skates at the thrift store and decided to make a freeskating edit with them that was absolutely amazing. In fact, Rollerblade loved it so much that in NOGRINDS II he was rocking a pair of the new Rollerblade Metro Blades.

Sascha singing with his old band

How old were you when you started blading? How did you get into skating. Do you remember what skate you had?

I started blading at ten years old when I got my first skates. However I was a skateboarder between ages of 6-10. One of my neighbors used let me use his crappy pair of rollerblades and skating around in those made me really want to get a pair of my own. So on my tenth birthday my mom gave me the choice of a new board or a pair of blades. I already had a board, so my mom bought me a pair of Roces hockey skates.

This was long before I knew about aggressive skating and spent my days rolling around town and bombing hills. When I discovered the local skatepark, everything changed for me. Back then I was still skateboarding on and off depending who I was with at the moment. I didn’t start street skating for several more years. I continued skateboarding and rollerblading until I was about 19 or 20, which was when I decided to dedicate all my time to just rollerblading, and that is what I have been doing every since.

What is your current setup for freeskating and grinderblading?

A little bit of both. I always rode bigger wheels on my aggressive skates because I like the speed and feel of them. But when I came across the K2 skates for $10, I said “fuck it” and bought them on the spot. Once I put them on, I immediately remembered how it felt to be on blades meant for speed and precision. I fell love in love with that felling all over again. Making the edit was really all about just having fun on these skates and seeing how far I could take them. I wasn’t expecting all attention I received when this edit dropped.

Are there any freeskaters who have influenced how you skate on bigger wheeled blades?

Not really. My influences are on the aggressive side of skating. It’s been really interesting for me because I still have an aggressive street mentality when looking at things to skate. However the equipment is completely different so I take a new approach to things and whatever happens next is always new to me.

How would describe the feeling you have when skating on a freeskate setup versus an aggressive wheel setup?

The speed and precision of freeskates is unbelievable and not comparable to aggressive skates. Since I’ve been riding freeskates I’ve switched from an anti-rocker setup to a flat setup on my aggressive skates, just because I love the feeling of big wheel blading so much.

You’ve been doing a lot of flips in the NOGRINDS edits. Did you grow up doing gymnastics?

Yeah, I grew up doing Gymnastics as a kid. I wasn’t formally trained or anything but my dad was, so he helped me with the fundamentals and I figured out the rest. One of my dark secrets is that I was a cheerleader in High School and that furthered my ability to do flips.

How did you get sponsored by Rollerblade?

My friend Gabe Holm, owner of Thuro skate shop, showed Tom Hyser some of my edits. Tom dug what I was doing and sent me some Rollerblade Solo’s. Then he was really impressed by my first NOGRINDS edit and wanted to get me on some Big Wheels so he sent me the Rollerlade Metroblades.

How different does it feel skating the Metroblades after having skated the K2 fitness skates?

The K2’s were really old, so every time I would ride them they would rip or something would break. The first few weeks of skating them was great but by the end of filming NOGRINDS, I could barley stand, they were completely destroyed. With the Metroblades I could skate way harder and do gnarlier tricks without having them get floppy or falling apart. Plus having the stiff boot of the Metroblades made them much faster.

You’ve off-road skated on some wet and rough terrain on your 80mm setup. Have you tried a bigger tri-skate setup yet for off-roading, or any actual off-road skates?

(laughs) That was somewhat of an experiment and it just happened to work out! But yes, Gabe gave me a set of off-road skates to demo. I really enjoyed them and I would love to try them out more but they are pricey! I have a 110mm and a 125mm frame setup and really like the 110mm setup for cruising, but haven’t taken them off-road. Unfortunately, I don’t have a pair of skates to put the 125’s on.

How much time do you spend freeskating vs. aggressive skating.

I go back and forth between the two. It really has to do with filming. If I’m filming a Big Wheel Blading edit, then that’s all I ride. If it’s an aggressive edit, then aggressive skates only.

Do you do any distance or urban skating?

I’ve never done any distance skating for sport! But I have skated some serious miles just to get where I needed to be. Urban skating I got down on a lot living downtown Keene. It is so sick to bomb through cities.

Who are your favorite skaters to watch?

Who would you love to session a spot with?

Oh man! Probably Eugen Enin, or Richie Eisler. I think they would push me to try some stuff I wouldn’t have ever thought to do.

Where do want your skating to go in the future?

I would really love to keep progressing in a strange direction with my moves. Sometimes I feel a little stuck in my thinking towards what tricks to try. I really want to be able to make people view skating differently with what is possible on blades, freeskating or aggressive. I would also love to someday work on designing skates because I have a lot of ideas and am constantly messing with my stuff to make it better.

What is the favorite thing you have done on blades?

A 360 through this small opening in a gate in a small aggressive edit I did. And that back flip over the gate in NOGRINDS, as well as the 900 off the bank in NOGRINDS2.

What is your favorite city to skate in?

Burlington, Vermont. It’s all downhill and the street spots are amazing!

Will we be seeing a no grinds III in the future? Any projects you are currently working on?

Oh yeah! A NOGRINDS3 is totally going happen. Honestly NOGRINDS2 wasn’t everything I wanted it to be. A lack of filming gear and filmers made me kind of rush it. But right now I’m currently gathering clips for a proper street edit for Rollerblade.

Which are your favorite skate edits that you have put out?

Are you still singing in a band?

Unfortunately, I’m not in the band anymore. It was normal band stuff. The guitarist and I had a hard time working together and trying to juggle skating and the band was a little tricky. Plus, I wasn’t happy living where I was at, so I had to make the tough decision to leave. I’m not too worried though, I’ve been playing music since I was a kid, so I’m pretty confident I’ll find another band to work with out here.

So you recently made a trip out to Los Angeles, how was it?

I didn’t get to do as much freeskating as I wanted to do in Los Angeles because the city was getting crazy amount of rain. Now I’m back in California, but this time around I’m stuck in the woods in Northern California. Any chance I have to get to the city, I try skate with the Shredweiser dudes like Matty Schrock and Chris Dafick or some of the bay area dudes like Sean Keane and Cameron Talbot. I do fully intend on doing a lot of freeskating, because there is a lot up here to skate

Have you tried any downhilling with Gabe Holm?

Yea and screw that! Gabe is on a whole other level with his downhill skills! I almost died trying to keep up with him. I appreciate it, but it’s not for me.

All skate photography by Greg Somerset.