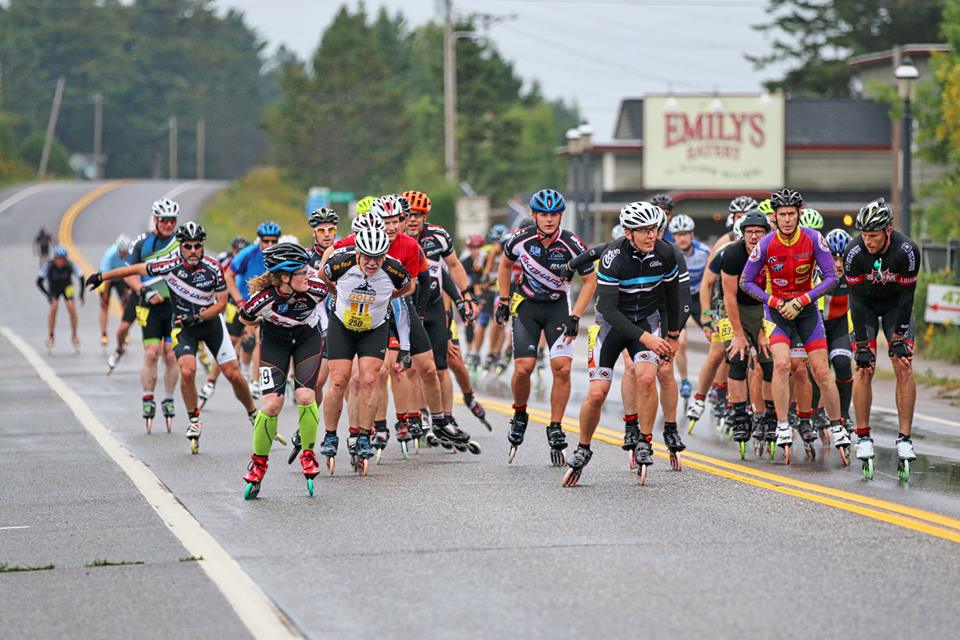 Longtime rollerblader Jarrod McBay recently made the trip up to Minnesota for the 21st Northshore Inline Marathon in Duluth. For the last 22 years, Jarrod has spent most of his time on blades street and park skating, but recently he’s taken a big interest in Big Wheel Blading. He and I had a chance a few days ago to sit down and have a chat about his experience skating his first marathon. If you’re a blader who has spent the last few decades grinding—and you have an interest in doing some cross-over onto a setup bigger than 57mm—take a look at Jarrod’s thoughts here. It’ll be right up your alley.

First time skating a marathon. What’s your overall impression?
It was amazing! It was amazing to see such a diverse age group and gender spread. Boys and girls as young as like 6 years old… men and women up to age, like, shit, I dunno… age 70 or something? Not at all what I’m used to, but it was totally awesome to see all those people on rollerblades.

That’s a lot of miles. How’d it go?
Tough. REALLY TOUGH. At first I wanted to go as fast as I could, but I quickly realized that I needed to keep a steady pace that I could maintain. I started to get really fatigued around mile 10, and then it just sort of turned to pain. It was brutal. It was also raining and wet, too. I couldn’t even bend over to take off my skates when I finished. My back was so tense!

It rained?! That suuuucks. How bad was it skating in the rain? Super slippery? Did you ever fall down?
Nah, I never fell down. I almost fell down once or twice towards end though! I was skating these Bont Red Matter wheels. They’re super sticky and they felt really great the whole time… well almost. Towards the end they felt a little sluggish. There were turns towards the very end that I had to take slower than I would have liked. Not sure whether that was the fatigue or if that was the wet roads. The paint on the road was really slick in certain spots.

What was the rest of your set up? And what’s the details on those Bont wheels?
I was wearing the Seba FR1s. I had Intuition liners in there. The frames were the stock 3×125 frames. It’s the standard 165mm mounts. Not UFS. The Bont’s were 125mm, aluminum core. They were super soft compared to what I’m used to. I think they’re like 80a or something. They felt pretty spongy to me—even squishy. Really good grip though. They still look new, like I just bought them.

Do you think that a good fit and the right skates for your feet is a bigger deal for street and park skating or for marathon skating?
More for marathon. I hear people complain about their feet hurting on street skates all the time, AND THEY STILL SKATE ‘EM!

Wait, doesn’t that suggest that people should be paying more attention to their street skate set-ups?
Yeah, immensely. I think people would be able to skate a lot better. Period. The thing is, the right skate and the right fit are important in both kinds of skating. The thing is that the consequences are different. In street skating, your skates can fit badly and not work well, but that only means that your skating is going to look like crap and you may get some blisters or whatever. In a marathon, the wrong skates could lead to a real injury in the worst case. Best case scenario for a crappy fit in a marathon skate is that you’re not able to finish. I’ve had some other long-distance skates that didn’t fit right. I got horrible blisters and hurt my legs and my back on the wrong shit. You really have to have the right skates.

So, if you’re taking to street skaters, your advice is that you gotta come outcho pockets and spend the money on the right skates?
YES.

What advice do you have for street skaters who want to get into BIG WHEEL and/or distance blading?
Do your research on frame set up, wheel set up, boots… everything matters.

Is this something people can figure out on their own or do they need to actually go talk to a dude at a shop?
Talk to a guy a shop, and also talk to skaters. Speed skaters are directly related to us. Same with downhill guys and freeskater guys… you know the “cone people”… talk to some of those dudes.

How about the old expression, “Turnabout is fair play”? Any advice for a marathon/distance skater getting into street/park skating?
(Laughs). Learn how to skate backwards. Learn how to trust your body to your skates.

WTF! Are there really people who skate a marathon in like an hour who can’t skate backwards?
I mean, I didn’t see anybody skating backwards. I bombed one of the hills backwards. Some dude was like, “I didn’t know there was a SHOW going on!” LOL. I saw some people have a lot of trouble with some cracks in the road. I was surprised. To me, skating backwards is pretty basic—at least for what I’m used to. I mean, the technique in distance skating is very different. The strategy is different too. Those guys spend a lot of time learning how to skate in packs and how to get really good power out of their strides. Skating backwards doesn’t really make sense in distance blading if you’re being serious about it. It’s just different. But if you’re going to get into street skating, skating backwards is like a thing to start learning on day one.

You’ve been Big Wheel blading for about a year or so. How have the distance skates—and the mentality that comes with it—affected your street skating?
I think it’s actually made me better. I see things differently in street skating. A stair bash sounds like hilarious fun—even to the point where I’d rather do that than hit the hand rail. I also think my fitness has improved. I feel like I can skate harder and for a longer period of time now. I also think my balance has gotten better. The biggest thing though probably is that I feel like I’ve kinda gotten back to my roots. I really love the feeling of just plain old rollerblading. You know? It’s like the pure essence of rolling. Last year I skated through all sorts of cities in Europe. It was so sick. I mean, I still love a good box session or whatever, but man… you know? Just the rolling part is so great!

Let’s talk about this fitness business for a minute. You’re no stranger to booze, cigarettes… other stuff… ahem… ***other stuff***. What it do?
I mean, this distance stuff has really made me want to get really fit. It makes me want to quit smoking—that’s for sure. It makes me want to get fit and knock off a lot of that other shit. Drinking though? FUCK YOU! I love me some DRANKS. I love beer too much to want to quit drinking beer. The smoking though… I really want to finally quit smoking.

That’d be great, man. I think a lot of us in street skating are going to find all these vices catching up with us soon. Especially those of us in our mid-to-late 30s or whatever. At the marathon though, were there beers at the finish line? Did y’all go out and rage afterwards?
LOL! OH YEAH. Mike Powell had it for free at the award ceremony. Some people got seriously lit. I mean, they had like plenty of pasta and stuff for people to get recharged or whatever, but I was definitely pounding beers at the end. So yeah, thanks for the beer, Mike! Maybe it was some brewery. Whatever. Whoever got the beer… CHEERS! I’m in your debt.

Okay, so here at the very end, who helped you get this marathon accomplished? Any shout outs?
Tracey White is probably the biggest one. He really brought me up to speed on what heat to enter and all that. Ben Price… he drove me around the whole time. Ben’s a rad dude. Mike Powell gave a shout out to BIG WHEEL BLADING DOT COM. That was dope. Also, this dude Anthony Anderson picked me up from the airport and got the Air B&B the first night and drove me to Duluth. I’m grateful for him. I’d never even met that dude before. We just clicked. Also, the guy Skeeter who organized the whole thing. He goes by “Skeeter Moore”… I think that’s it. He gets a serious shout out. It was a super rad event and I’ll for sure be back next year. This year my time was 1 hour 45 minutes. Next year I want to try to get it done in an hour and 15. I want to try to take a full half-hour off my time.

Good luck!
Thanks! Catch you on the flip side!