Home>Blog>BWB>Maureen Cohen Harrington of Washington, DC on Inline Skating and Life During COVID-19

Maureen Cohen Harrington of Washington, DC on Inline Skating and Life During COVID-19 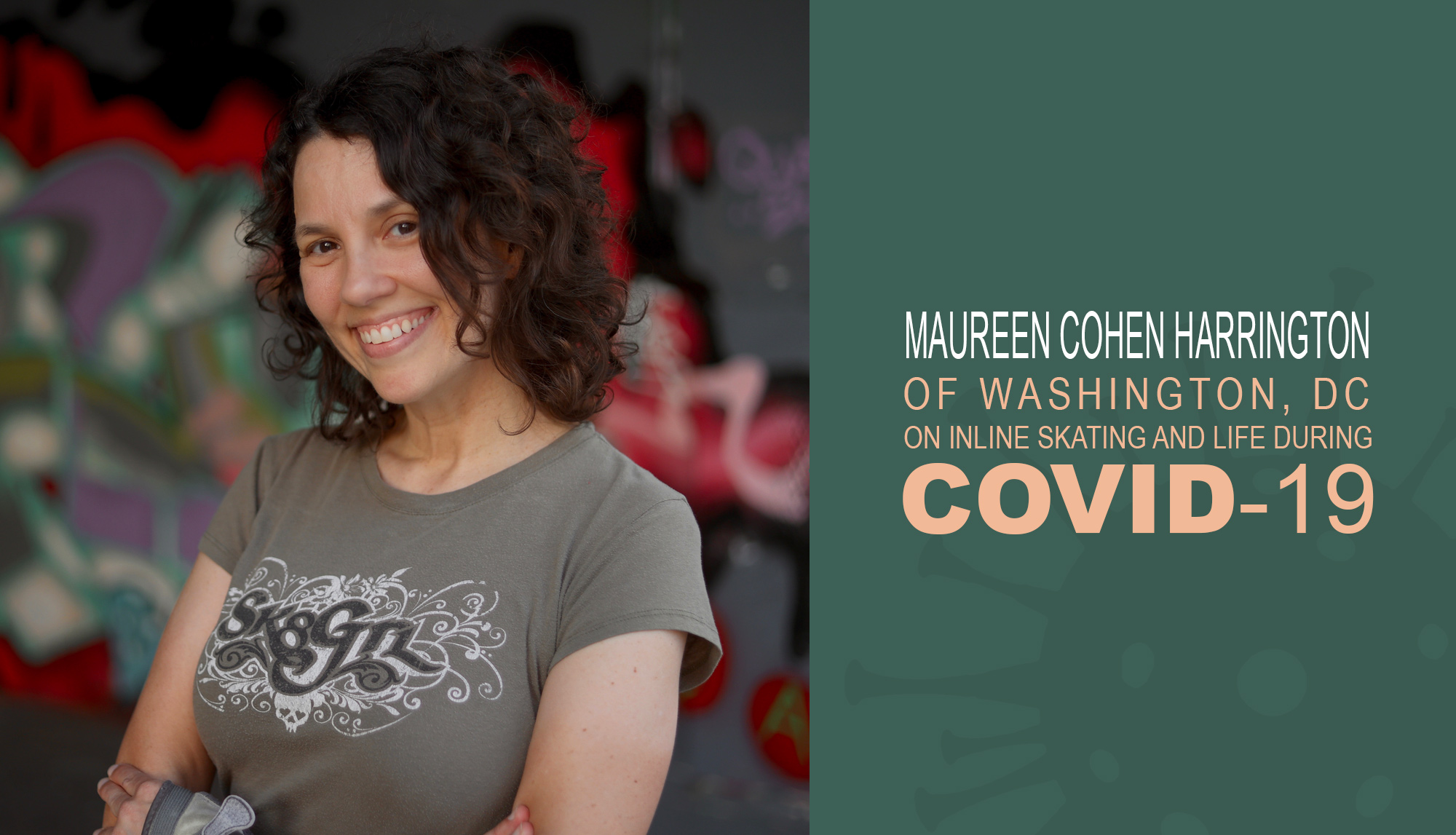 For the 97th daily installment of Big Wheel Blading’s Inline Skating and Life During COVID-19 series we talk to Maureen Cohen Harrington. Maureen is a 52-year-old inline skater and attorney living in Washington, District of Columbia, USA. She is a Senior Counsel in the Library of Congress Office of the General Counsel.

What steps did the USA and Washington, DC take to battle COVID-19 and how are things there now?

The USA doesn’t have a coordinated response, so I’ll focus on DC’s. On March 11, Mayor Muriel Bowser declared a state of emergency and a public health emergency. On March 24, she ordered the closure of non-essential businesses. On March 30, she issued a stay-at-home order (which, much to my surprise, specifically cited “rollerblading” as one of the “allowable recreational activities”). On May 29, DC entered phase one of reopening, though bans on gatherings of more than 10 people remained in effect. On June 22, DC entered phase two, which allows groups of up to 50. DC residents can now get free, walk-up testing for COVID-19 and antibodies.

I’ve been part of our community’s response. I’m on the board of Washington Area Roadskaters (WAR), and I’m one of our skate leaders. I’m director of SkateDC Weekend and WAR’s liaison for Skate of the Union (SOTU). WAR’s Inaugural Skate was originally scheduled for April 5, SkateDC Weekend for May 29 – 31, and SOTU for June 26 – 28.

SkateDC was the first city skate weekend in the USA to confront the possibility of canceling or rescheduling. We struggled mightily with what now seems like an obvious decision. On March 25, we announced that SkateDC would be postponed to October 9 – 12 (even that is now TBD) and canceled other WAR skates until further notice.

The first skate of WAR’s phased reopening was the one that I led on June 14, with a 10-person cap and RSVPs requested. After DC entered phase two of its reopening on June 22, we kicked off the season with the June 26 SOTU/WAR skate. (The SOTU races become virtual.) I led our Friday night monument loop. Masks or other face coverings were strongly encouraged. Those without them were to stay at the back. Despite the short notice and no out-of-towners, we had a good turnout, all with face coverings.

Group photos are challenging. We’re spread further apart and don’t rely on passersby to get photos of the entire group. But these and other precautions are small prices to pay for being able to skate together again.

Another challenge that WAR has faced is our group-up location. WAR traditionally meets in Lafayette Square, across the street from the White House. That stretch of Pennsylvania Avenue has been closed to cars since 1995 and is also home to a roller hockey group, White House Hockey.

Lafayette Square has received worldwide attention as the site of the June 1 military/police removal of peaceful protestors and Trump’s walk across the street for a photo op at St. John’s Church. (And later, for protestors’ attempted removal of the park’s Andrew Jackson statue.) Since then, the accessibility of Lafayette Square has been difficult to predict, between protests, activity at the adjacent and newly-named Black Lives Matter Plaza, military/police activity, and the ever-moving White House fencing.

Were you skating during the lockdown?

Yes. Initially, I skated in the spooky serenity of DC’s near-empty streets, especially at night. I’d often see only police and the homeless along my route. But even before DC’s stay-at-home was lifted, people were growing restless. Our sidewalks, trails, and even streets were increasingly crowded – including with those new skaters that we keep hearing about!

Streets are still my go-to, especially for group skates of any kind. Trails are too narrow and filled with too many people, many of whom aren’t wearing masks. I’ve skated on the Baltimore and Annapolis Trail with friends a couple of times recently, and I was tempted, for both socializing and speed, to get into a paceline. Streets are better for distancing.

Death, I suppose. Or a serious enough injury, but only for as long as it takes to recover from that injury. Or for the duration of a non-skate adventure, such as thru-hiking the Appalachian Trail or a cross-country cycling trip.

I feel like I was meant to have wheels on my feet. I got my first pair of quad skates as a child, and my first pair of inlines in the early 90s, even before commercials for Rollerblades started airing on TV. (It’s true! They did!) I’ve been skating with WAR since 1996, and my skate travels have taken me to many cities and countries. I used to do more racing (24-hour relays, A2A, marathons in the USA, Canada, and Europe, a 111K in St. Gallen, Switzerland…), but I was never pro/elite. I’m a street skater at heart.

So I’ve changed the type of skating that I’ve done over my lifetime. But honestly, until I read your question, the thought of stopping skating never occurred to me.

Not intentionally. I rarely do actual training. But I keep active. Since the pandemic, I’ve been doing less skating and more nature hikes and city walks with my partner, Jonathan Rosenberry. For improved social distancing, we’ve preferred less popular places, times, and weather. Rain hikes are the best! But in “better” weather, we generally stick to wider trails, like the C&O towpath. I’m also taking advantage of the stairs in our narrow, tall house. I’ll often do 40 – 60+ flights of stairs per day.

This will be a shock to all who know me, but I’ve been cooking!

Jonathan and I have also been watching my favorite TV series, “Buffy the Vampire Slayer.” Since I couldn’t introduce him to my beloved city skate weekends (though he earlier joined me for skate events in Miami, Los Angeles, Philly, and Cuba), I’m at least introducing him to this.

Normally, I overschedule myself. Chronically. So I’m not home much, and my time at home feels compressed by the life maintenance that has to be squeezed in between my activism, adventures, and day job.

My individually or officially canceled activities during the pandemic include the USA city skate weekends (DC, Philly, NYC, Chicago, Boston), the 82-mile Rhine-on-Skates, a skate/hiking trip in England and Norway, a 100K one day hike, a 50K running race, a mountain hiking/camping trip in Seattle, and a 77-mile fast-packing ultra in the South Carolina mountains. On a less athletic note, also San Diego Comic-Con, the Toronto International Film Festival, and the Animal Rights National Conference in Portland, Oregon.

Now, I’m home a lot. I telework. My time at home feels ample and amorphous. But I’m bonding more with my felines. And I’m more grateful than ever for where I am and what I have. Cue Dorothy from the “Wizard of Oz” saying “There’s no place like home.”

As a nation (and often as a world), we are facing the biggest challenges that we’ve ever faced. Some, including climate change, mass extinctions, and other environmental destruction, are much bigger than COVID-19. Yet here in the USA, we’re losing our ability to talk civilly to those with opposing views. We’re losing our compassion and respect for one another. Without that, how can we understand each other? How can we solve our problems?

This is one of many reasons why the skate community is so valuable. Skaters have a wonderful diversity of political and other opinions, ethnicities, races, nationalities, ages, educational backgrounds, day jobs, religions, etc. But we are connected by our skating. Which reminds us that we are connected in other ways as well.

We’re also connected to non-human animals. Their well-being is inherently important. But our using them for food and in other ways is harming our environment and our own health. It’s why we have COVID-19 and many other pandemics, as well as antibiotic-resistant bacteria. I stopped eating animals in 1984, and went vegan in 2013. Please consider going vegan, or starting on that path. See Challenge 22 and Free from Harm.