Home>Blog>BWB>Ben Price of Phoenix, Arizona on Inline Skating and Life During COVID-19

Ben Price of Phoenix, Arizona on Inline Skating and Life During COVID-19 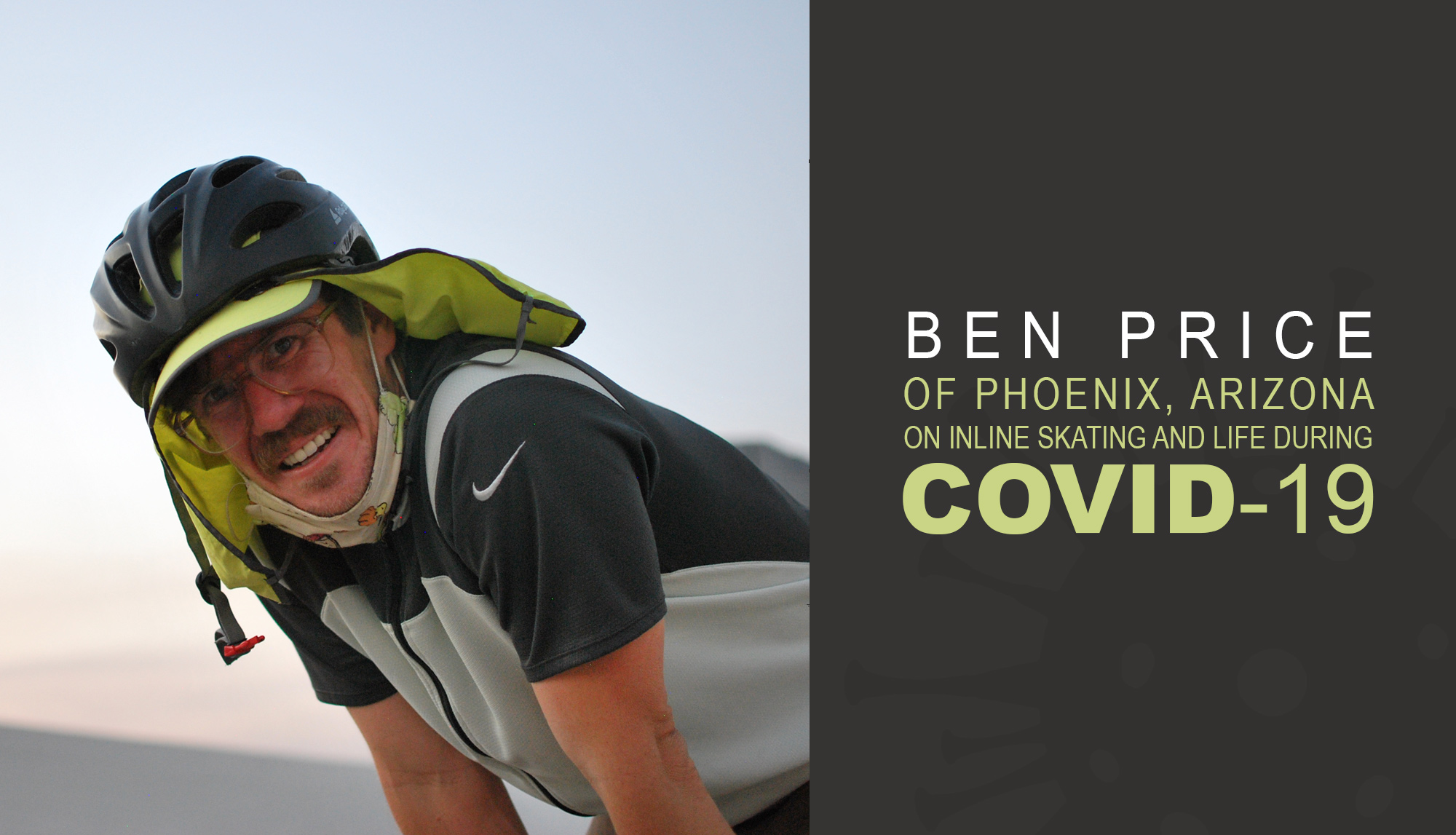 For the 86th daily installment of Big Wheel Blading’s Inline Skating and Life During COVID-19 series we talk to Ben Price. Ben is a 38-year-old inline skater and lawyer living in Phoenix, Arizona.

What steps did Arizona take to battle COVID-19 and how are things there now?

Our country basically pretended it didn’t exist for a while, until local officials started taking responsibility. At that point Phoenix’s mayor implemented a stay-at-home order, and then Arizona’s governor implemented a statewide order that supplanted the mayor’s order. When the governor’s order expired, for some reason the mayor was no longer able to re-implement a local order, so everything opened back up. At that point there was so much misinformation that like half the population took no precautions, saying stupid stuff like “if you’re scared of me not having a mask, then just stay home,” and so our infection rate spiked. The governor said it didn’t matter because we still have hospital beds (but didn’t said how much room we have in the morgues), but then was forced to reverse himself a few days later and allow cities to make their own mask rules. Now people are wearing masks everywhere, at least. It’s still really hard to get tested though.

Were you skating during the COVID-19 lockdown?

Yeah! Because I’m teleworking, I started dropping my fiancée off at work each morning and then skating home – it’s almost a straight shot on the canal paths. So I’ve been skating more distance, but I also built myself a dream grind box and I’ve been skating that, and skating around my neighborhood some too. And I’ve done some virtual skate community stuff, which is an interesting set of new opportunities – marathons via Endomondo, games of SKATE via Instagram. I’m probably skating more than before, though I’ve only skated in person with another person once (hi Brent!).

I guess a neurological disorder might do it. I’ve already made the transition to wearing a helmet, so I’m probably in this until my body won’t.

Maybe, but I’m not sure what cross training is.

Mistrial on the rail using Them skates with Oysi flat frames.

Working a lot, fixing my house, a bit more reading and cooking more than normal.

Before this, I kind of oriented my plans around having coffee shops or bars as endpoints, and I was just getting the hang of skating with the Phoenix scene at Thursday night skates. Those are gone but my life feels a bit calmer, which is a very nice thing.

Skating to work on Seba Marathon skates with 100mm Mushroom

Ha, in general? I hope the jackasses in my state don’t get my fiancée killed, first of all, by overrunning our hospitals with contagious disease. We’re planning on getting married in July, and we’ve already downgraded the wedding twice, so hopefully we can pull off our current extremely-stripped-down plan. Beyond that, I’m really anxious about America being on a path away from the rule of law and justice and toward the rule of power and disinformation. It’s crazy how unpredictable our future now is. But the protests give me hope that our generation is ready to fight to make things better.

I think it’s a bit scattershot. Ryan Buchanan did a really impressive job of being willing to shut down Thursday night skates, but as things have worn on there’ve been more small sessions and it seems like things are somewhat normal again. I’m giving it time because I have more exposure and more risk that a lot of people do, probably.

Skaters should refer to the afterlife as “going on to the land where everything slides nice.” Ride big wheels because it’s your superpower and it’s like flying. A unity is when the backslide foot is on top, and there’s a reason we don’t say alley-oop royale. Undercover needs to pour more 59mm bullet profile wheels for Oysi setups. Gino’s East is my favorite deep dish. Fek.