Home>Blog>BWB>Mike Ward of Duluth, Minnesota on Inline Skating and Life During COVID-19

Mike Ward of Duluth, Minnesota on Inline Skating and Life During COVID-19 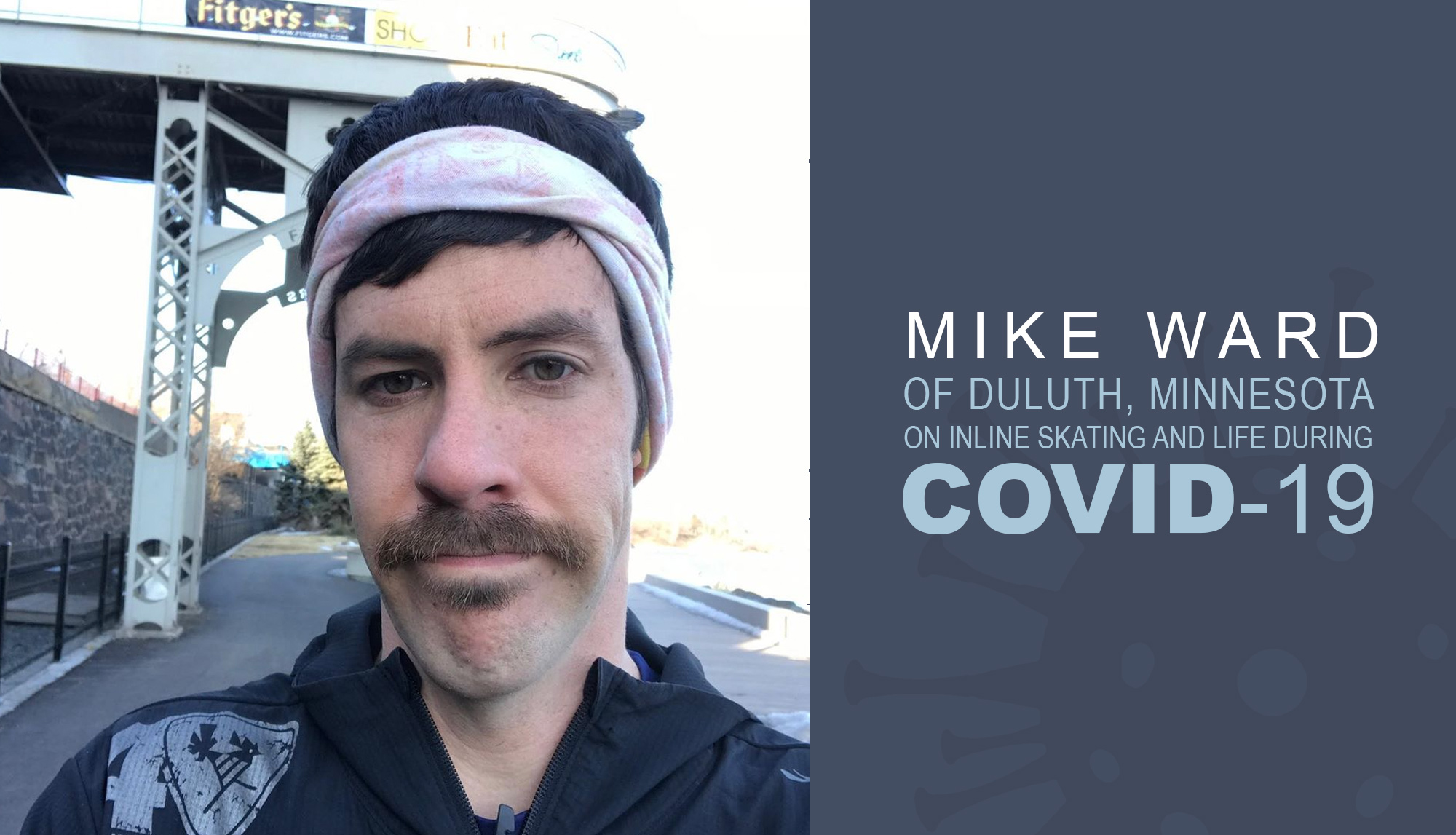 For the 76th daily installment of Big Wheel Blading’s Inline Skating and Life During COVID-19 series we talk to Mike Ward. Mike is a 31-year-old inline skater, multi-sport athlete and the race director of the NorthShore Inline Marathon living in Duluth, Minnesota.

What steps did Minnesota take to battle COVID-19 and how are things there now?

The whole country is kind of on a state-by-state basis. There is so much news out there that it is hard to decipher what steps anyone is taking. Minnesota is starting to ease stay-at-home restrictions. In Duluth, there are very few cases, but the Twin Cities (Minneapolis and St. Paul) are generally a few weeks behind bigger major cities like Los Angeles and New York, while Duluth is generally a few weeks behind the Twin Cities.

Yes and yes. Well, I’m not actually skating at this exact moment but trails and roads have been open in Duluth, in Minnesota and Wisconsin and many people are taking advantage of that as a way to get out of the house and do something productive.

Where have you been going to skate?

I have actually been skating at the local college, the University of Minnesota- Duluth. Since the spring semester was moved to online only, the roads around campus have been pretty barren! It’s a nice windy, relatively flat 1.5 mile loop that I’ll roll on.

I don’t foresee this happening, but if the Minnesota guidelines changed to forbid outdoor activity, I would certainly comply. I don’t have an extra-wide treadmill (or any treadmill) so a ban on the outdoors would make skating very, very difficult

How has COVID-19 affected the world of organized racing events? Will NorthShore be canceled or postponed?

COVID-19 has changed all mass events, maybe forever. There is definitely no end in sight with how all mass events, including races big and small, will proceed until a vaccine is developed. I have kind of seen a domino effect. March events started toppling, then early April events. When events at the end of April canceled, went virtual, were postponed, May events started reacting. Once events at the end of May started going, June events start going. And so on… I think the same thing will happen on opening back up. When one event goes back live, it will be a green light for other events to follow suit. We have yet to see that happen. I have heard of some smaller 5k running races go, but with drastic modifications. Wave/time trial starts, no-touch race production, no food, no water, loop courses only, and so on. That’s a good start but that sort of heavy modification isn’t applicable for all events. There are SO many elements to NorthShore that modifying every single piece of the puzzle would be extremely challenging.

That being said, we are looking to mid- to late-July to make a final determination on what we will and can do. That is kind of the last minute to order the supplies we need to produce the race, the last minute to submit permits, organize contractors and volunteers and staff. We’re in this tense middle ground right now where we don’t really know what will happen between now and July and can’t really make any sort of determination until then.

Yes, I am pretty concerned with the entire race culture. I wonder if we’ll look back in 20 years at the “golden age” of races… I believe that the global pandemic will change things forever, even if it’s just subtle cultural changes. Will people be less apt to pay money to gather in a large group? Who knows.

I think money makes the world go ‘round, and the City of Duluth and local businesses of course want to reduce the limit on gatherings as much as possible within sensible safety guidelines. I mean, there has been red tape and regulations like fire codes and such forever, in the name of safety. Will new regulations or limitations become the norm? I don’t think so. Maybe for 2020 and maybe to early 2021. I think when (and if) a vaccine or treatment is developed and administered to the global population, limits on gatherings will be lifted as soon as humanely possible because of the major economic impact that mass gatherings garner.

If it does get cancelled, do you plan on holding any virtual online events that weekend?

We are strongly looking at producing virtual events regardless if NorthShore goes on “as normal”. I personally believe that virtual race options will become the norm for ALL races. We have already seen that over the past years with mass events with caps like the New York City Marathon (running race). Like I mentioned in your previous question, I think that the social acceptance of mass gatherings has already changed forever, to some extent, and people who don’t feel comfortable being in a huge group of people will request alternate options to be involved.

To be honest, inline skating is cross training for me! I tend to focus on running more than skating, and it’s such a great cross training activity for that. It works my neglected muscles like ankles and hips, plus I can get bonus low-impact aerobic time.

I am a multi-sport athlete more than anything, though. Endurance junkie here! So I wake up and decide what sounds fun: inline skate, trail run, stand up paddleboard, bike. I’ve been doing a TON of single-speed gravel biking lately.

I have too many hobbies as it is, but I just started a garden in my front yard. I’ve half-assed tried to grow vegetables a couple times and failed. This time I spent the money and time to ensure that my crops would grow and so far, so good. In northern Minnesota, the climate isn’t excellent for robust crops but I am excited to eat food that I can grow in my yard. I saw a glimpse of what a food shortage could look like… I am a major bean eater and couldn’t find lentil beans for the life of me right when this pandemic hit. It was terrible. So now I have lentils growing!

Mike with NorthShore staff and volunteers cleaning up their adopted section of Scenic Highway 61.

I am working from home instead of the NorthShore Inline Marathon World Headquarters. My scope of work has changed somewhat, but it’s been a pretty minor change all in all.

In addition to being Race Director for NSIM, I co-own a small race timing company here in Duluth. That work abruptly and completely ended in March. We typically time a race almost every weekend from May through October, so that is very bizarre and unfortunate. It’s nice to have weekends back but definitely not a good time to be all-in on the events industry!!

I am highly concerned with the status of my greatest passion, racing. Last year, I was race director for 3 races, timed about 40 races, participated in about 10 races, volunteered at about 5 races. Races are my life, and to see that entire world come crashing down in the span of 7 days in mid-March has been really hard to handle.

My career revolves around races so a big concern is putting food on the table and roof over my head, obviously. But also, I am concerned about what the future of races looks like. Nobody knows. Time will tell. It’s hard not to speculate.

People are skating, that’s for sure. It’s really good to see. I think people are generally following local guidelines. I think that a lot of exercisers are familiar with working out solo, and I can only speak for myself when I say we appreciate and cherish that solo time. I don’t think the pandemic is having as detrimental of an effect on endurance junkies, at least when it comes to training and day-to-day activity.

We (NorthShore Inline Marathon) put on a virtual event on Mother’s Day where we asked people to go out and skate for an hour, then send in their photos. We got over 70 photos back! That was awesome to see. Lots of solo skaters.

We are getting plenty of inquiries about the 2020 NorthShore Inline Marathon and Skate Fest. We’ve tried to get as much info out there as we can, but we are kind of left in the dark too. We’ve pledged to keep our website www.northshoreinline.com updated as soon as we have news. People can also check our Facebook page and subscribe to our email newsletter for news and updates.

Experience My Trail was so fun! How cool to see over 70 photos from skaters (and runners and rollerskiers) from around the country. Check out the hashtag #experiencemytrail for some close up shots… Keep skatin’ y’all! #nsim2020