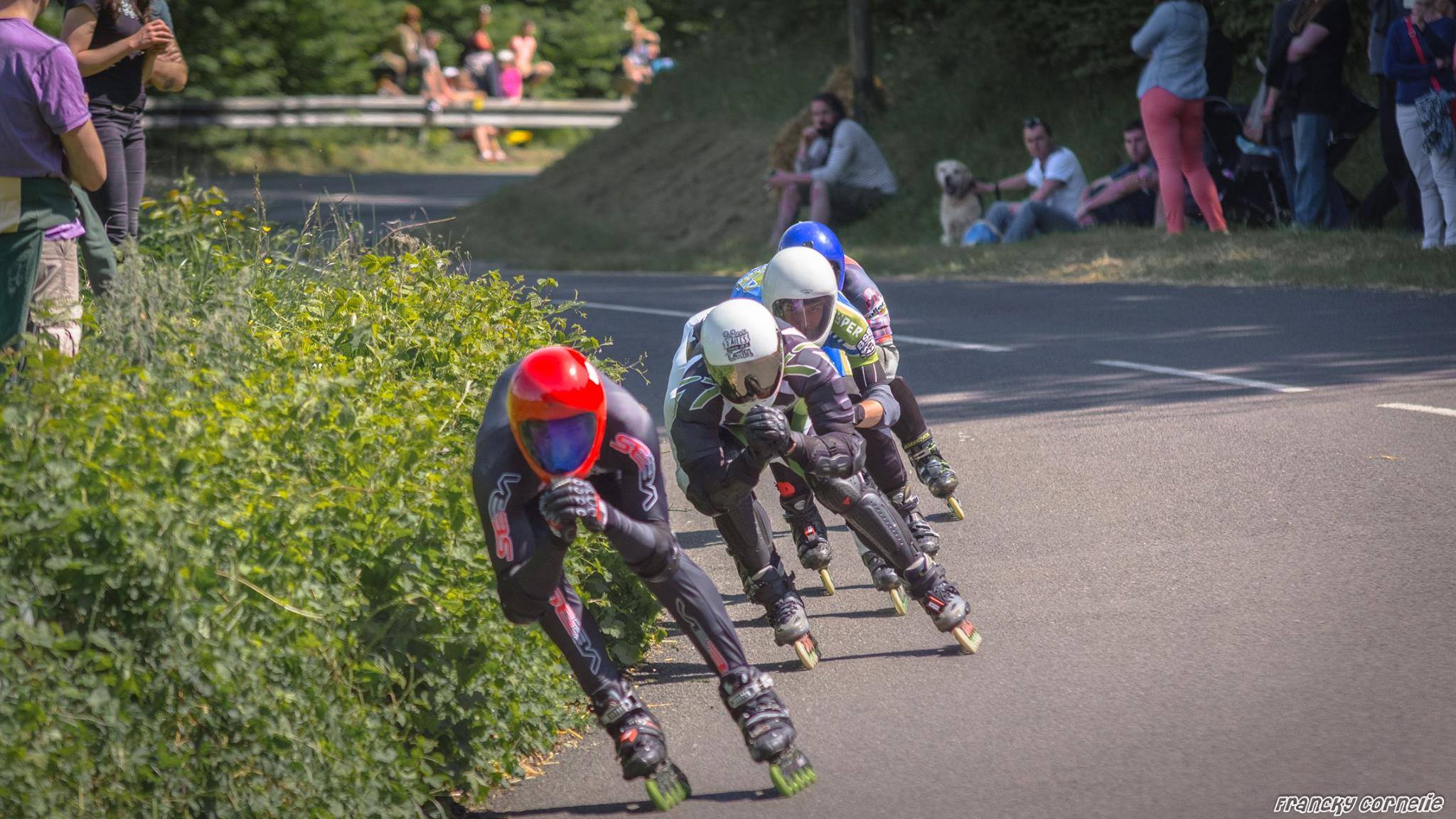 Etienne Herreros is a 26-year-old downhill skater from Lyon, France. He is ranked #3 in the world for downhill time trials. This past July he won first place in both the time trial and inline cross events at the IIDA World Cup in Sora, Italy. He is currently sponsored by EOskate and RollerN’co. Etienne is currently headed to Nanjing, China to compete at the downhill event at the 2017 World Roller Games.

What is your current skate setup?

How long have you been rollerblading?

I started rollerblading at the age 5. I began skating seriously in 2001 when I was 11-years-old.

What were your first skates?

My first skates were the Roces Majestic 12, an aggressive street skate. They were heavy but well made skates. They allowed me to achieve everthing that I wanted to do on skates.

I started downhill in 2006, when I was 16 years old. I had the chance to skate in Lyon, where there were many pro riders and downhill enthusiasts. Back in 2006 downhilling was flourishing and the skaters of that generation were amazing! I was inspired by Benoît Gamba, a big name in rollerblading as an organizer and an all-around good guy.

What was your feeling after you finished your first downhill run?

I felt the joy of finally dominating a hill that a few months earlier would have terrified me.

Do you do any other kinds of skating besides downhill?

When I was younger I had plenty of time to practice slalom, aggressive skating and hockey with friends, who like me loved all aspects of rollerblading in general without having to make a specific choice. I started racing in 2008 and managed to place in some competitions. I started to link the skills I learned from racing to downhill and vice versa.

How often do you go downhilling?

I try to train twice a week.

How many people do you skate with on a regular basis?

The number of participants has fallen greatly in the last few years. Now there are only 2-3 people per session here in Lyon. That can have its upsides and its downsides.

How did you get into competitive downhilling?

I followed the lead of the big named skaters that I grew up around and was given the oppurtunity to register and compete in a competition. At my first event, I was excited that I would finally be able to skate a course with no cars on it. When competing I would dwell on the results afterwards. I wanted to do better in future races. This motivated me to practice and keep placing higher and higher at events.

What do you do to train for downhilling?

Rollerblading with a capital R! One can only be good at downhilling if they are versatile and practice different forms of rollerblading. The best way to achieve this is by learning useful skills from other disciplines of skating.

How many downhill competitions are there?

I am not sure how many actual events there are around the world. The main events I know about this year are in Sora (Italy), Ambrose (Italy), Teolo (Italy), Sotchi (Russia) and Nanjing (China)

What are your favorite places that you have been to skate?

Aside from Lyon, the most beautiful downhill ride I’ve done was in in Lausanne, Switzerland. In terms of simple, natural beauty, my repeated trips to Italy have allowed me to visit some emblematic locations full of magic. Sightseeing in Venice at night, just before a competition that was not far away the next day, was a relaxing experience! The descent that has the strongest symbolic connotation for me is “the dole” in Switzerland. It is a place where the best European skaters gather to skate 14km ​​slopes. There is no pleasure that can compare to the feeling you have on this mountain.

What is the worst injury you’ve had?

Unfortunately, due to age, my worst injury is also my most recent. I had a fall in Ambrose, Italy this past July where I injured my left shoulder with multiple tendon and muscle lesions. This injury was a reminder that our sport is dangerous no matter what your skill level is.

What protective equipment do you wear?

I wear all the mandatory protective equipment required for World Cup runs, which are a helmet, knee pads, elbow pads, crashpads, gloves and a spine protector.

Five wheels allow for better stability at high speeds compared to four or even three wheels. They are also much more efficent when doing slides, which is how downhillers brake to slow down. They are designed to be as low as possible but still really stiff, allowing better reaction and tight, dry braking! Five wheels add more efficiency in braking.

What do you think about the popularity of tri-skates?

I’ve never tried it, but my initial feeling would be that two wheels less and the height of the skates would make for less efficient braking with the sliding time significantly slowed down.

What are your biggest downhill successes?

I have had many downhill victories that make me proud. To be able to ride with, compete against and then being able to beat some of the biggest names in downhill is always a challenge. To make it to the podium against so many talented skaters is always highly satisfying.

Which countries have the most downhillers?

Spain, Italy and Germany have the strongest scenes for downhill. The sport is growing and developing heavily in Latin America. Spain is built as a stronghold like Italy or Germany, obviously in Latin America the sport develops very well and many are new skaters. It is unfortanate that there is no strong connection between Europe and America. Most riders are not crossing the ocean for the competitions on the other side of the pond.

How many people are usually competing in downhill events?

Most events average anywhere between 40 to 80 skaters.

What is your favorite event?

In terms of downhill I prefer circuits like Lausanne or Lyon, however the most organized event is in Padova TEOLO, Italy. They do an excellent job managing the event, supporting the riders and providing lifts.

Was it hard to learn to slide at such high speeds?

You need to take small steps when learning to slide, little by little you increase your speed before sliding. With this method, I did not notice any difference between slides at slow speeds compared to the high-speed slides I do now. The technique is the same.

What advice would you give to anyone who would like to start the downhill?

Before downhilling, learn to slide (brake) on flat ground at low speeds. Do not go for a fast slope right away. Start slowly. As the Italians say “chi va piano, va sano e va lontano”, which translates to “If you have an easy-going and relaxed approach to life, you’ll live more healthily and longer”.”

Special thanks to Jonathon Holler and Tony Martins for help with the French translations.