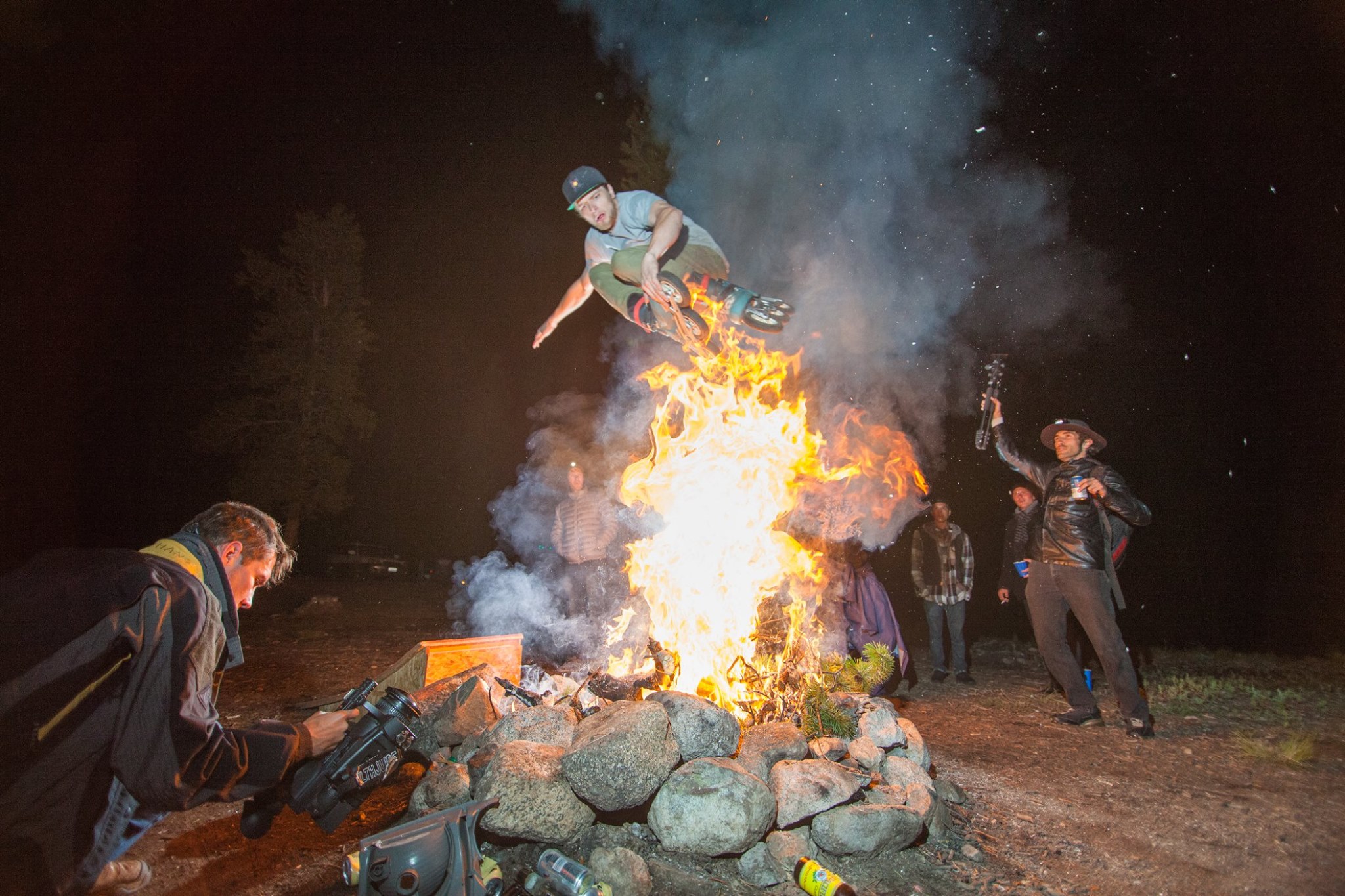 There have been many great contests and events in our sports history but none have withstood the test of time like the Colorado Road Trip (CORT), which is celebrating it’s 20th Anniversary this summer. During CORT skaters from around the world gather in the Rocky Mountains to skate several amazing concrete parks during the day and then camp at majestic spots in national forests. After skating you can relax in hot springs or cool off in various lakes and rivers.

Many people make side trips to go hiking and there are plenty of people skating through the campsites on their off-road blades. I spoke to Luke Bender, who has been keeping the Colorado Road Trip alive all these years, about the trip’s history, some of his favorite moments and what one should expect as a first timer. I really hope that those of you who have never been, or those of you who haven’t been in years, will make it to 20th Anniversary from August 2nd-6th. It will be an experience you will never forget!

How did the Colorado Road Trip get started?

Tyler Higgins and Sayer Danforth started CORT as a final camping trip with friends before moving off to college.

Did you ever imagine the Colorado Road Trip would last this long?

We had no idea it would last as long as it has, but we always joked about a future where there would be children and we would be too old to skate. We aren’t quite there yet, but it is not far off.

What have been the biggest changes over the years?

The biggest change over the years had to be the shift from moving camp every night to staying in the same location for the entire trip. Over the years the attendance has grown considerably starting out with only five people to one of the biggest years having over 130 people.

Any special plans for this year? What is route?

The only special thing we have planned as of now is going back to the original route which hasn’t been done in over 5 years, but who knows what might develop between now and then. I think we will have to change one of the old campsites due to houses being built where we used to camp.  

What should people expect who’ve never been to a CORT?

People should expect anything and everything on CORT. We always start with a plan but you never know what is going to happen. If everything goes as planned you can expect great skateparks embedded in the beauty of the Rocky Mountains, hanging out with upwards of 120 people from all over the world with all different levels of experience and interest in rollerblading, crazy nights camping deep in the woods around a big fire and the opportunity to enjoy cliff jumping and swimming.

Where do most of the attendees come from? Do you get people from overseas?

The attendance seems to shift year to year but over the last few years Texas has had the highest attendance. We have had a few different people come from overseas but most of the CORT population is U.S. based.

You have had various camping locations throughout the years, why did you switch the route in recent years?

We first shifted from the original route so that when we completed the event the last campsite would only be two hours away from Denver, making the drive four hours shorter than previous years. Next we changed up the entire format to a single campsite for the entirety to help cut down on set up and tear down of camp as well as freeing up people to do things at their own pace since their camp was always set up.

How did you find all the campsites used throughout the CORT history?

For the first series of sites we just asked locals in each town and followed vague directions to remote locations and set up camp. The following years, Nolan Wojciechowski and I spent a lot of time driving up and down every forest road off of the skate park route looking for suitable campsites for 130 people. It turns out it’s very hard to find a site that can do that.

What was your favorite year?

I can’t really say one year was better than another, when every year so many different things happen. At this point they all seem to blend together.

What are some of your best memories throughout the years of CORT?

One of my favorite memories on CORT was the last year we did the I-70 route and the police showed up at the second campsite out in the middle of the desert. When the police arrived, they pulled up on 100 people setting up tents and starting fires and they asked, “whose is in charge here?” to which Mykel Fatali replied, “Rollerblading”. The bridge jump outside of Glenwood Springs is always very memorable with all the insane things people have done off of the bridge. Roilen Ivester did a gainer off the top of the bridge as well as Nick Rother doing a 540 from the top in the nude!

The best memories are those of late night hikes deep into the woods or up a mountain just for the fun of it. And just hanging out around the fire with old friends and being in the moment. One of my least favorite memories was when I was running down the desert hill at the second campsite at night. I jumped across a gully and landed face down in a giant cactus patch. Then I stumbled back to camp with my entire body stinging from the cactus needles. It turns out I was bleeding all over my hands and face. I stood around the fire for a solid hour while five people helped pull needles out of my punctured body!

What were some of the craziest things to happen throughout years?

The craziest was the machete attack one Sunday morning after a long weekend of getting on each other’s nerves. The two parties involved were from New Mexico. They started the morning off by threatening to kill one another. It finally escalated to Dom Gallegos getting slashed on the elbow and ribs with a giant machete. Dom was so nonchalant with the skin on his back flopped open. His ribs were exposed that he wanted to go to the first park to try and skate.

We convinced him to go to the hospital where he was stitched up and sent on his way home. The slasher took off on a high-speed chase through Buena Vista. He was eventually apprehended just shy of the Colorado/New Mexico boarder. I don’t remember what he was charged with but the entire event was nuts! Every year it is just crazy to see what happens when 70-80 rollerbladers show up at a skate park in the middle of the mountains and we take it over! The looks we get from the locals is priceless! It’s a pretty good chance the local police will stop on by to see what everyone in town is talking about! The locals at the park are usually friendly and excited to see the scale of CORT!

Is the Colorado Road Trip a rain or shine event?

Yes, every year concerned citizens create panic by posting weather reports with rain in the forecast. The reality is that we will adapt and find something to do.  We are committed to making the best of what we have. And in the end of the day the people that show up is what make the event, not the skating.

Have you been organizing CORT by yourself all these years or do you have people helping you?

There isn’t much that needs to be done other than posting up the dates on the Internet. CORT basically takes care of itself after that. I did have a big hand from Nolan Wojciechowski searching out new camp sites for the new route. Frank Stoner and Will Enzenauer helped me set up the massive tarp city last year.

Are there any rules on the Colorado Road Trip?

I would say the only official rule is NO MACHETES! Other than that, have fun and try to respect nature and the others on the trip.

What are the most common mistakes or things first timers don’t prepare for correctly when attending CORT?

I think the most overlooked thing is clothing to accommodate the ever shifting mountain weather. Most people dress too warm and end up freezing at night. The temperature drops to 35 degrees at 10,000 feet as well as not being prepared for rain! Also WATER!!!! Altitude can be hard to adapt to and drinking lots of water is crucial for survival!

Five essential items you should have on the road trip?

What is your favorite park on CORT?

My favorite park is probably Montrose because of the crazy long curvy quarter pipe!

A Very Cool Edit from the 2012 Colorado Road Trip

The official hashtags for your social media posts during the trip this year are: #cort2018 #cort20

bigwheelblading.com also plans on shooting a mountain blading edit this year during CORT. If you have off-road skates then bring them with you! If anyone wants to help film and work on this project contact us.

Check out the photo slideshow of the beautiful scenery you will be experiencing on the Colorado Road Trip.

This slideshow shows skateparks, campsites and fun times during the Colorado Road Trip.

Bigwheelblading.com’s mission is to help all the disciplines of inline skating grow by unifying our sport through. The entire sport of inline skating and only grow when we are all united. We are striving to create quality original content on all the disciplines of skating. This is only possible with YOUR support. If you like what we are doing and want to see more frequent and original content, like this story, then please donate anything you can.