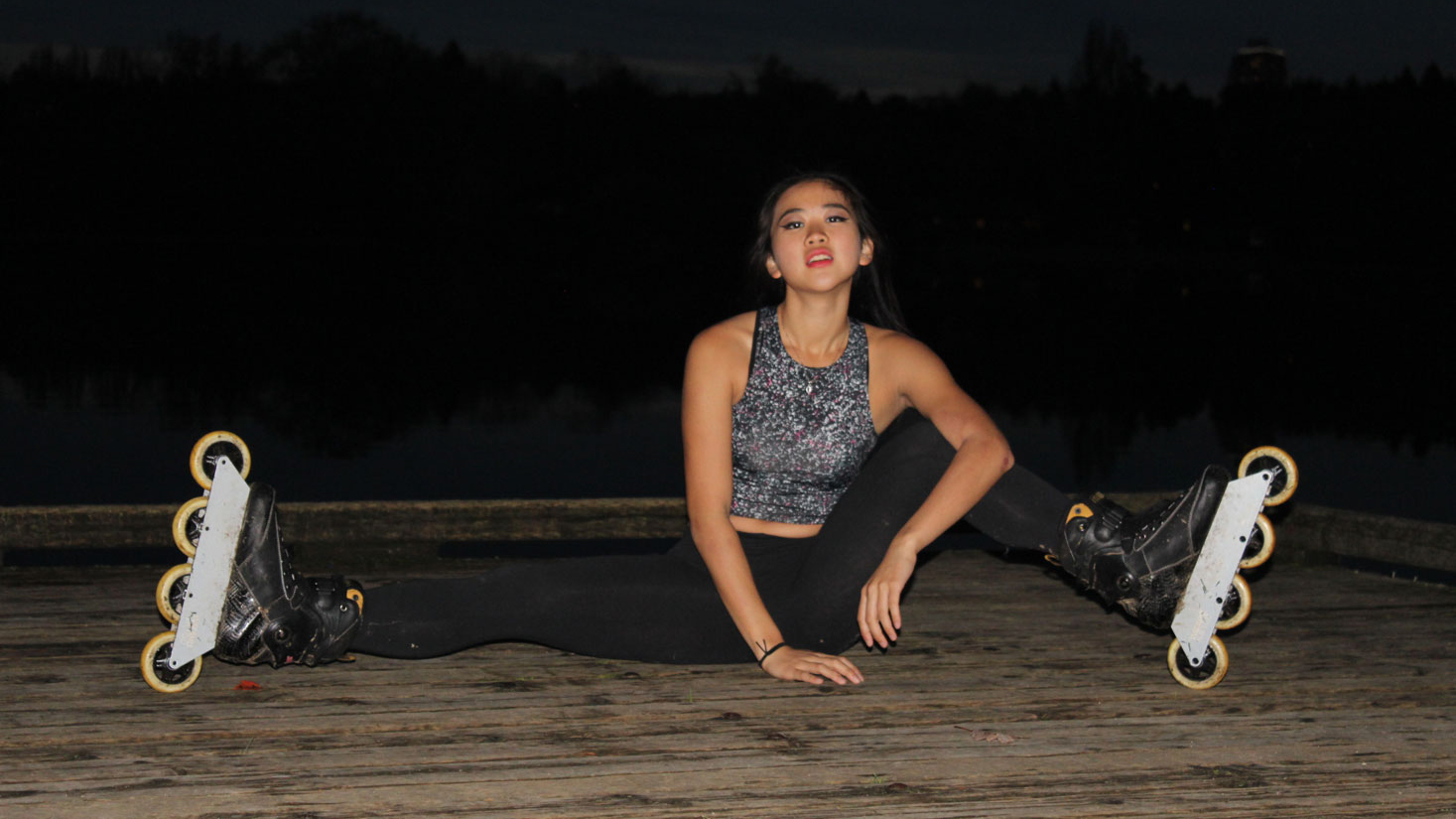 Yanise Ho aka The Bladress is a 22-year-old long distance inline skater from Hong Kong currently living in Toronto, Canada. She had never skated on rollerblades until last year when she decided to skate 540 miles from Savannah, Georgia to Miami, Florida without any money. In March of 2018, she plans to skate 11,000km across Europe through 16 countries to raise funds to build 16 schools in underdeveloped countries with BuildOn.

Did you skate at all in the past before learning how to rollerblade last year?

I did some roller-skating when I was a kid, but nothing really serious. So I picked up my first pair of rollerblades a year ago and started learning on the streets. I just started out of the blue and I didn’t know anyone who rollerbladed when I first started. I’ve always had crazy ideas pop into my head and I would just go and do it. I was rollerblading everyday that I was in Canada and I fell so many times learning how to skate. I ended up in the hospital one time with ten stitches and the next day I was back on my rollerblades.

What made you decide to skate from Savannah, Georgia to Miami, Florida?

Initially I was going to do something similar and walk across America, but I just thought that I’ve always been a slow walker and I’d be better off doing it with wheels. I decided to drop everything I was doing and flew to Canada and start training. The skate started in Savannah, Georgia because one of our team members from the Bladress lived there, so I stayed with her for a couple of days over thanksgiving before beginning the journey to Miami.

I have always wanted to do something like this because I’ve lived by myself for a long time traveling around the world. I’ve basically moved and lived in a different place every couple of months and I’ve seen nothing but the kindness of strangers everywhere I’ve been. It bothers me that people always have this notion about how the world is so dangerous, don’t trust strangers and are overly careful. I really don’t like that way of thinking and wanted to prove those people wrong. I wanted to prove that there is so much kindness out there. We just have to have faith, so I decided to do this trip without any money.

How long did it take you?

You did this trip without any money or pre-arranged places to stay. Did you just knock on people’s doors for assistance in lodging and food?

That is true, nothing was prearranged, and the only thing I had with me were my skates and some cloths. Almost every night I found someone to host me and rarely did I have to knock on somebodies door. I only did that once or twice.

How did you find people to host you then?

As soon as it would get dark I would stop skating because I didn’t feel comfortable skating at night. Wherever I ended up stopping I would start looking for people. But most of the time I didn’t have to initiate a conversation because they would already come up to me and ask what I was doing. In the south, especially in Georgia countryside, it’s so weird to see a girl rollerblading with a backpack down the road. So most people out of curiosity would come up and talk to me and I would explain what I was doing. Most people would be excited for me and would ask me if I had a place to stay or if I eaten yet. If not they would say, “let’s go!” It went really smoothly.

Did you have any problems with anybody?

Everybody was really nice, at least I’d like to see it that way. One time I got rejected and another time I got yelled at. She was yelling at me and scolding me, telling me I had no brain and that what I was doing was so stupid. She believed the world was so dangerous and was just saying everything against what I believed. In the end she actually hosted me and I spent the night with her. In the morning we had breakfast together and it just proved that there was pure friendship there and in the 80 years of her life she had never let a stranger stay in her home.

It was really heartwarming for me, because before I left her place she said to me next time I see someone traveling again with a backpack I’ll have a new outlook and perspective. It was one of the best experiences ever. She started sharing stories with me about her deceased husband and her secrets that you can only tell a stranger. I felt like I was doing something right.

How long did you practice for before you went on your trip?

I trained about four months. I would practice skating further and further and skated in the Northshore Inline Marathon in Duluth, Minnesota two months after I first put on skates.

Since your skate from Savannah to Florida, how often have you been skating?

So tell me about the film crew that will be with you on your Europe trip?

This project is not just about me, but also about all the people I’ll cross paths with. I’ve gathered a group of people, a producer, a videographer and a social media person. We’ll be together and throughout the journey I am hoping to find different homes and people to participate in the project by hosting me and sharing their food with me. This time will be a little different in that I’m not going to go without any money. The goal is to stay at different peoples houses, to exchange cultures and share stories and hopefully we stumble upon really interesting people that we want to interview and document.

Will your crew be staying in the houses too?

If the host allows that would be fantastic, but they are down to sleep in the car or stay in hotels sometimes. They are adventurous as well.

What skates will you be using for this trip?

For the European tour I haven’t actually decided yet. When I skated from Savannah to Miami I did it on Seba skates with Wizard frames. Afterwards everyone asked me why I used this setup, apparently they are not meant for long distance skating. I used them because Leon Basin was one of the people who taught me how to skate, and I really liked the frames when I was doing slalom. I decided I would take those skates with me and didn’t bother getting another pair. In the end I made it with those, so it’s made me feel stronger because I had to push harder with that frame.

Does the Bladress have any big skates planned before the Europe tour?

I’ll be in Hong Kong for a month and then I plan on skating 500 miles from San Francisco to Los Angeles in November to raise funds to build a school in Malawi. The purpose of The Bladress is to raise funds for schools for girls around the world. The whole production and film crew is composed of women. We want to prove if men can do it, we can do it too. Most of the world, including rollerblading, is mainly dominated by men, so we just really want to prove our point.

How do you know these women?

When I first started the project I thought I couldn’t do it in a month by myself. I remembered I had a friend back in high school that worked in film. She reached out to a producer and that’s how we came together.

The Bladress Being Interviewed on the Harry Connick Jr. Show