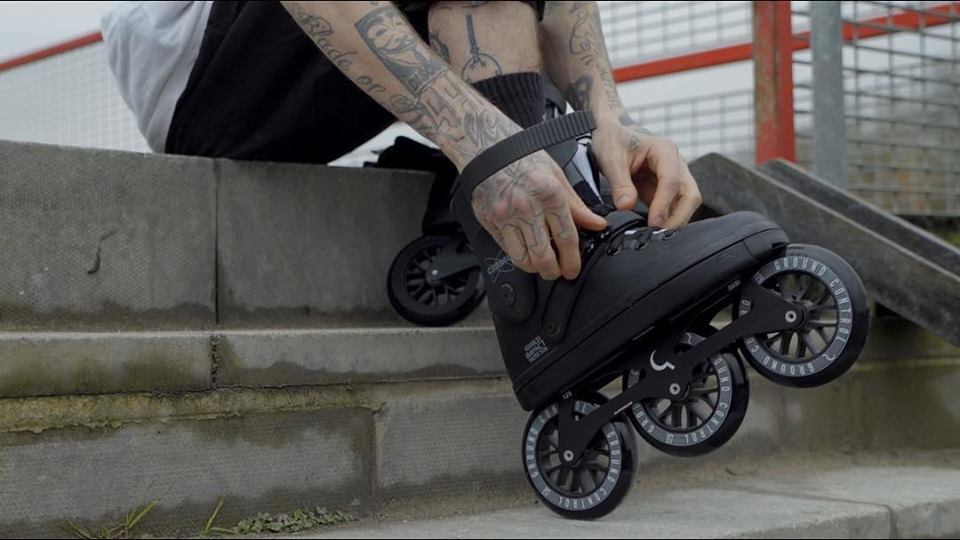 Alex Burston is a professional aggressive inline skater from Manchester, England. His sponsor, Sunshine Distribution, recently sent him their new Razors Cosmo freeskates and a set of the Ground Control UFS 3×3 freestyle frames. I’ve been pretty excited Ground Control stepped in to bring us a UFS freeskate frame option, in both a 3×125 and 3×110. I had a chat with Alex over Skype about these frames and his newfound love of Big Wheel Blading.

How long have you been skating?

I remember having those Fisher Price skates when I was 2-years-old and I’m 28 now. I’ve been going to the skatepark since I was 6-years-old, so for 22 years I’ve been skating aggressively.

So you grew up mainly skating park?

Yea and skating street as well, the first skatepark I went to was Bones in Stockport when I was six. It was nice to have a park nearby because there weren’t too many skate spots where I was from at the time.

As a kid, did you do any other kinds of skating?

I used to always be on my street, trying to go fast and skate down hills. At first I never knew skating was a thing really, I just did it. Apart from that, not really. As soon as I found a pair of skates that I could grind on, that was it.

Did you try skating big wheels before Ground Control released their 3×3 freestyle frames?

No, not really at all. I mean I tried some of my friends on, here and there, but I didn’t even skate a flat setup on my aggressive skates until the Ground Control BIG Frames came out.

What size wheels are you skating on the GC Big frames?

I skated them with 72mm wheels when I got them. Then I skated the GC MEGAS after that. But up until that time I was skating an anti-rocker setup[a] with 58mm or 60mm wheels on the outsides.

How did skating a 72mm flat setup compare to skating a 60mm anti-rocker setup you’d spent your life on?

It was definitely a nice change. You can maneuver a lot easier on the ground with the 72mm flat setup.

Did you have any problems doing tricks with the bigger frame and wheel size?

I wouldn’t say I had problems, but there were some little wheel bites that would happen, after all those years of skating anti-rocker. Other then that it was just me getting used to having a flat setup. The GC BIG frames are quite easy to skate because they have a nice size groove. But yea, it was definitely a big change, but it was fun, I kind of had to relearn a lot of things again and just do them properly. Bigger wheels just make your skating so much smoother.

Which Ground Control freeskate frame setup are you skating on now?

I got the big big boys, the one two fives, I couldn’t help it. I saw them and was like I want the biggest ones. Gimme them ones!

Are you skating them on the Razors Cosmo or Razors Shift skates?

I’m skating them on the Cosmo at the moment. I have both the Cosmo and the Shift, so I can keep my freeskate separate from my actual aggressive skate. Which is very nice.

The Cosmo and Shift skates are fairly similar right? Just with a different soul plate?

Well the bottom part is obviously different, the actual soul base and there is no soul slider on the Cosmo. It’s just a nice streamlined soul plate. It also has a strap that the Shift doesn’t have. I don’t know if it’s just me, but they seem a little bit thinner, the Cosmo seem a bit more aerodynamic, but that could just be because of the different soul plates. But I love them, I proper love them, I’m looking at them now.

What was it like the first time you took the 3×125 frames out for a spin?

The first time I actually tried them was last June at Barcelona Extreme when Marco Giehm had them as a test sample. That time was actually kind of scary because I’d never skated on wheels that big before. At first, I was like whoa, can I do this? I was going so fast and not use to being that high up off the ground. Then I actually got my own pair and basically straight away I took them out in my town, there are hundreds of hill bombs here to skate.

I took them out and loved them straight away. It is a bit scary though. You know you step down on a little curb and there is no middle space to plant off of because there are just three wheels. So there is a lot of things I have to get used to but straight away basically I loved it. You can easily go over all the cobbles and all the bumps. It basically feels like you are flying. You just have to be cautious.

The 72mm are definitely a great aggressive frame for skating around a town from spot to spot, like many people did when they were kids.

Definitely and that is the best thing about the shift concept. I used to do the same thing; I would skate around the city center nearly every day on an anti-rocker setup. I got the GC frames and big wheels and it just made my life so much easier.

Did you have any interest in skating 3×3 skates before you got yours?

I’ve wanted some for ages. After seeing it, you know the big wheel skating and the freeskating is coming up and kind of popping up in our scene. So I’ve been seeing a lot of that and have been gagging for them for ages. As soon as I found out GC was making them I was hyped. That was it, I was so happy. I’d been wanting them for ages and now they are here!

In aggressive skating you still have this faction that hates the idea of big wheel notion that it is lame. What do you have to say to those people?

I mean it’s skating, just skate. If you don’t like it, don’t hate and you don’t have to do it. If you haven’t got something nice to say then you don’t need to say nothing at all. But you are right, I have heard a lot of bitching about it. I think they just need to shut up and go skate.

Since you’ve gotten the Cosmo skates and 3×125 frames, how often have you used them?

I use them almost everyday. When I’m at home, basically I skate them 9 days out of 10. Some days I’ll skate the 3×125 frames to a spot and then shift them over to an aggressive frame, either my BIGS or anti-rocker setup depending on how I feel that day. And that’s it. It makes skating fun and having these options is perfect for me.

Alex Burston on the Razor Cosmo with 3×125 Freestyle Frames

What’s the furthest you’ve skated on your 3×125 frames?

I skated quite far, I skate around town a lot and I do little missions on my own sometimes, but I never really measure it. If it’s dry, I go out at nighttime and bomb some hill bombs, then skate up some more hills to go back down them. Typically I’ll be out for a few hours skating.

You should look into getting an app like Endomondo, which tells you how fast you go and how far you go and all sorts of other things.

Yea I’ve seen that, I think I need to get on that. And then I can do me jogging as well.

There have been several aggressive skaters, like Daniel Nielson, that have started skating in marathons as well. In fact, he skated the Razors Shift skate with GC 3×110 frames in the Berlin Marathon last year. Do you have any desire to skate in any marathons in the future?

I would absolutely love to skate a marathon! It is something I’m definitely going to be looking into.

Made by Kathy’s Custom Crochet in Chicago, Illinois

You blade, your lady Laura blades and I know your daughter hasn’t been born yet, but how long before baby Alice gets some blades of her own?

Alice is due to be born May 13th and we already got them mate. We got Alice skates! Not real skates yet but we did get some little crochet bootie skates that are a replica of my pro skate, the Razors SL! Laura got them made by Kathy’s Custom Crochet in Chicago, Illinois. Kathy did an amazing job; they look so nice and are really awesome!

What’s your favorite urban playground to skate in?

It’s kind of hard, but it’s also kind of easy, because it’s Barcelona. It has everything you want to skate, from hill bombs, to free skating, smooth ground and the aggressive skating, with all the rails and other stuff is unbelievable.

At the moment it’s Adrenaline Alley Skatepark in Corby. It’s where they are having the British Championships at next weekend. I don’t skate there enough because it’s about 4 hours away. But when you are there, you get lost in that place; it’s like a little town. It’s really good!

The pump track you were skating in your freeskate edit, is that in your town? What was it like?

Yea it’s not far at all, just a couple of miles down the road. It’s really fun; it’s better to skate on a dry day though. We went there when it was actually kind of wet and soggy from the day before. There are other ones that have been built all around the UK that are concrete. I love skating the pump tracks though on these big wheels, it is a lot of fun. It is very tiring though.

Aritz Ortega filming in Malaga, Spain for his 125mm edit.

Who is your favorite person to watch on big wheel skates?

Aritz Ortega has been doing some cool stuff lately. It’s been really good to watch him and he has something in the works coming out soon. I like to see Nick Lomax. Lomax smashes it. He’s a buddy of mine, we grew up in the same city. He’s doing 900s and flatspin 540s on the streets. He is crazy and really nice to watch for entertainment. Who else has been smashing it on the big wheels?

a. an anti-rocker setup is when on an aggressive skating frame the front and rear wheels spin normally and are in contact with the ground, while the inside wheels are generally 48mm hard urethane or plastic wheels used to increase the surface area for grinding.