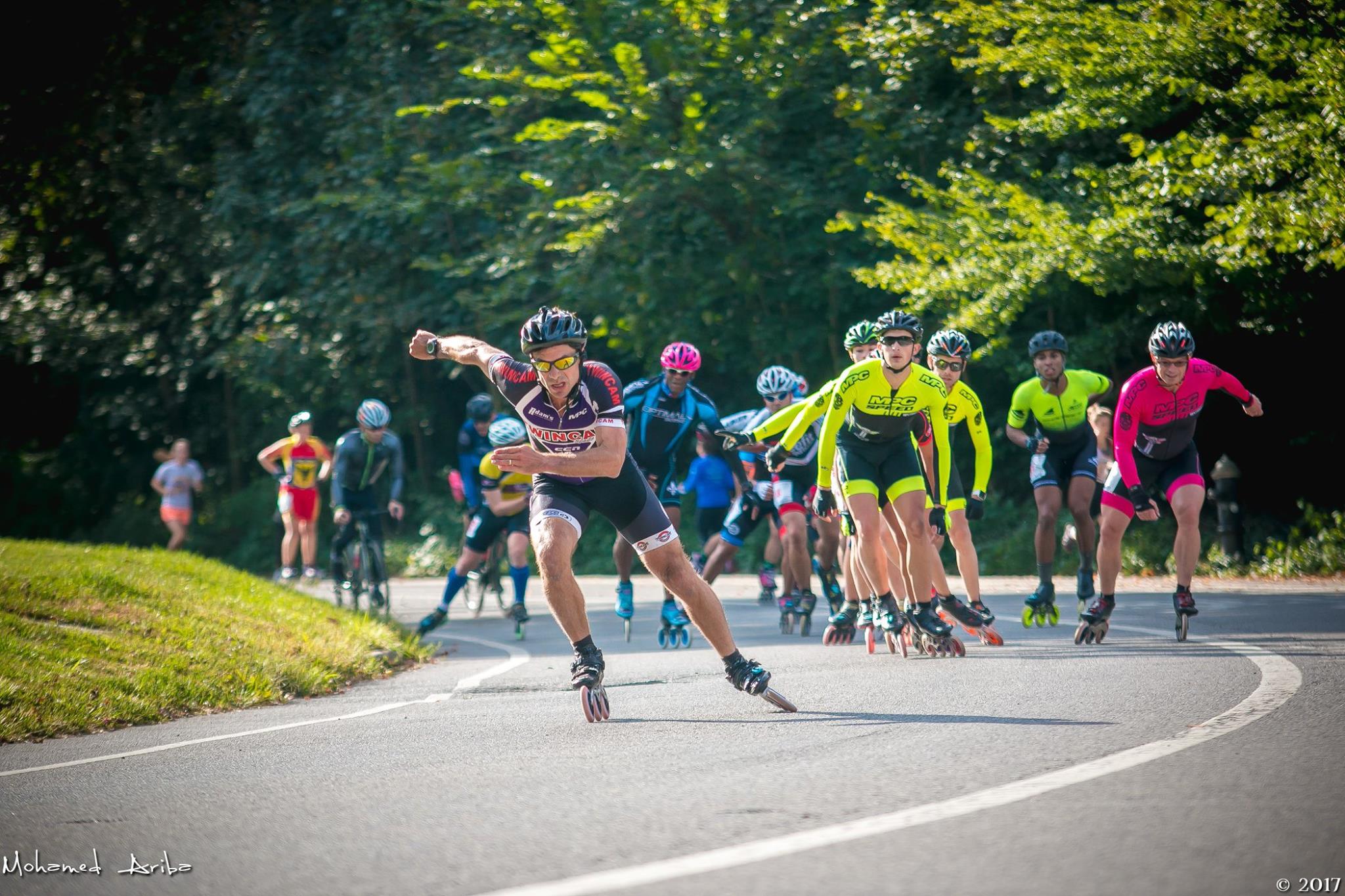 Arnav “Sonic” Shah is a New York City native and staple in the inline skating scene there and on the East Coast in general. He is a well-known slalom skater and instructor, who also dabbles in aggressive inline skating and travels around the country attending all kinds of skating events and competing in various marathons and utra-marathons. Just a week before he was to skate in the grueling 87 mile (140k) Athens to Atlanta Ultra-Marathon he competed in the NYC 100K Ultra-Marathon. Arnav was kind enough to share his experience participating in this race.

The NYC Skate Marathon & 100k takes place every year on the fourth Saturday of September. This is a great race because it strives to be very inclusive, echoing the nature of New York City itself. Participants include a wide spectrum of people from young children to senior citizens. There are separate divisions for inline and quad skaters, and the event does get quite a few quad skaters that take up the challenge. Distance options include 5k (3.35 miles), half marathon (13.1 miles or 21k), full marathon (26.2 miles or 42k) and the 100k (64 miles), and for the first time, a relay option.

The course itself is set on the 3.35 mile loop at Prospect Park in Brooklyn. If competing in the the half marathon, that would be 4 laps around the loop, 8 laps for the full marathon and a whopping 19 laps for the 100k. It’s arguably one of the more difficult skate marathon courses that exists. There is a fairly long and steep hill that you have to repeat each lap, then there is the “Jekyll and Hyde” nature of the pavement (which ranges from super smooth to minor potholes), and the increasing presence of runners, cyclists, kids, dogs, random skaters, and even horses. There are however some amazing trade-offs that come with these challenges. While repeating the hill every lap might be painful, it’s also inspiring to pass through the start/finish area every time, where there is a large crowd cheering you on made up of not just those there to support the event, but also tons of random New Yorkers that stop to watch. I can’t think of any other skate marathon in the US that provides so much spectator energy. Also, the diversity of the park is very striking as each lap you switch between not only uphills, downhills, flats, smooth and rough pavement, but also more crowded areas to more serene areas with views of the lake and the NYC cityscape.

The first time I competed in this event was in 2008. I completed the full marathon in the recreation division on a pair of Hypno convertible skates. I showed up in swim shorts, a “Sonic the Hedgehog” t-shirt and carried a peach in my back pocket. At some point, I got so desperate going up the big hill, that I started skating it backwards in order to use different muscles. I’m not sure if it worked, but I sure had a lot of fun doing it. I repeated the full marathon in the recreation division for another three years after that.

Flash forward to 2017 which marked my third consecutive year of using speed skates and doing the 100k distance challenge. This category is among the few events worldwide that spans a distance greater than 26.2 miles, and draws some of the boldest skaters, including the legendary Eddy Matzger, the unrelenting Francisco Ramirez (who also happens to be the event organizer) and a French Canadian named Jerome Comtois-Urbain who’s competed in the event for 10 years.

The race began this year with everyone taking off at the same time. Unlike other races, the elite skaters don’t begin with an ultra-breakneck speed because many of them are pacing themselves for the 19 lap longhaul. So the first few laps are relatively relaxed, as far as things go for the pro-pack. In fact we even get some home video moments online from Eddy and some selife shots from Francisco. I provide my own electronic accompaniment by pumping music through a loud bluetooth speaker (headphones are unfortunately not allowed because of permit regulations with the NYC Parks Department). That being said, we are still pushing laps of just over 10 minutes and averaging 20 miles per hour.

As the laps go by, skaters in the pro-pack try to pull away and break the paceline. I almost falter a few times but other skaters including myslef manage to catch up each time. Eddy Matzger, a monster on hills takes off on the long uphill but no one follows. He eventually falls back into the paceline and says to me “They didn’t take the bait”. I had gotten accustomed to seeing some of the other elite skaters take off on the big uphill each lap only to relax when they go to the top. Minding the many miles remaining, I chose not to destroy my legs chasing them up the hill, but I knew I’d lose the paceline at some point. That point was lap 11. Daniel Brown, already among the best speed skaters at age 19 and winner of the 100k last year, continued with another sprint after reaching the top of the hill. The paceline was instantly broken up into those who chased them, and those that chased but couldn’t cut it. Unfortunately I was in that second group and looked for others to pace with. There were a few skaters ahead of me that I’d have to chase down, but just behind me was my good buddy, Parker Bugg, so I decided to ride with him. We stuck together for another couple laps. Another skater joined us briefly but he couldn’t keep up with us when going up the hill again. Eventually the miles started getting to me too and I got dropped by Parker.

It’s worth noting that even at this point there’s a lot going on on the course. In addition to the growing number of regular park users, there’s plenty of skaters out there too. Many of the non-elite inline and quad skaters are still working on completing their marathon. And then there’s the relay skaters. The relay option was new this year and had a lot of signups. They formed relay teams of 2-6 skaters and pass a baton to each other between laps, with the goal of collectively completing as many laps as possible within the 4 hour time limit. Only one member of the team is out skating at a time. This made for some interesting dynamics. For one, it kept a lot more skaters on the course, especially in the latter 2 hours, when in past years most of the non-100k skaters would have dropped out. It also gave the 100k skaters someone to paceline with in later laps if just for a little bit. At one point, I jumped behind one of the relay skaters and he was pushing hard. He told me he was on his 5th lap. No wonder he seemed so fresh – I was on my 15th lap! It wasn’t long before he dropped me, but that burst of speed was much appreciated while it lasted.

I was definitely hurting the last few laps and I wasn’t the only one. At one point I passed by a skater who was sitting down on the hill pounding his legs with his fists to get the cramps out. I was astonished as this skater had won the North Shore Inline Marathon just 2 weeks earlier and was the 2017 world champion sprinter. But this level of distance is a very different game. I finished the race with a time of 3 hours and 41 minutes. I was a little behind my goal time but I still felt accomplished, especially since I kept my technique clean the entire time. Daniel Brown came off with another victory for 100k and Jorge Botera took the 42k.

The NYC Skate Marathon and 100k isn’t known for being the most organized event, and that’s partly because it’s primarily organized by Francisco Ramirez, who’s also a competitor for the 100k. This year turned out better than the last few. We had timing chips for the first time in years so all the numbers came out properly. And Francisco really went the extra mile by giving out hoodies instead of t-shirts (they were very welcome on the chilly Fall morning) and beautiful medals for every finisher (which is a change from last year where only podium placers got medals). Unfortunately there were still a couple of hiccups. The timing chip system didn’t differentiate men and women, so few women made it to the podium. The event organizers have promised to get this fixed for next year. The race also started about 30 minutes late, but as the joke goes: the actual race start time is 10 minutes after Franciso puts his skates on, after he’s done taking care of everything else for the event.

All in all, the event was a great one. We had tons of participants including plenty of children, older skaters, and quad skaters. The new relay option was a huge success. The amount of spectators, from skater supporters to random passersby was off the charts. On top of that, the weather was phenomenal. I can’t wait for next year and the date is set: September 22, 2018. I better start getting my miles in now!

For more pictures from the 2017 race check out these photos sets from Ariba Mo and Viralap.